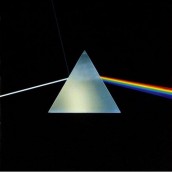 ©2011 Capitol Records
Pink Floyd - DARK SIDE OF THE MOON
Columns

Holiday Gift Guide 2011: Five Awesome CD Sets You Can Crank Up to 11

Featuring such great releases by Pink Floyd, U2, Sting, The Cure and the Beach Boys

PINK FLOYD – DISCOVERY BOX SET
Suggested Retail Price: $179.98
Cool Yule Factor: It’s crazy to think how much music Pink Floyd put out in a short span of time – and how much of it was absolutely stunning. They survived the psychedelic 1960s only to forge new ground with experimental albums in the 1970s including classics THE DARK SIDE OF THE MOON and WISH YOU WERE HERE. It was 1979’s THE WALL where they achieved absolute nirvana. That 2-disc set has stood the test of time and creates a searing odyssey into madness – augmented by Roger Waters rich musical storytelling and haunting vocals. All of the band’s releases are captured on this deluxe super set. Everything is remastered and sounds better than ever – particularly 1983’s underrated THE FINAL CUT (unofficial sequel to THE WALL). It’s great to have all their albums in one place and to listen to the band’s evolution and its subsequent demise into misdirected pop after Waters left. Still, this is a great price to get that uber fan the ultimate Pink Floyd set. You can also gift a massive download of the set from music e-tailers for half the cost.
Purchase PINK FLOYD – DISCOVERY BOX SET Here 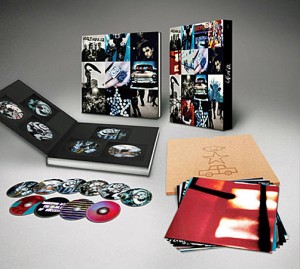 U2 – ACHTUNG BABY (Super Deluxe Edition)
Suggested Retail Price: $139.99
Cool Yule Factor: When box sets cost as much as this one does, you better love the band or the album to make it worth the investment. Yet, for all the great albums U2 has produced over the years, ACHTUNG BABY really defined them in a big mainstream way. And to have the album, it’s follow-up ZOOROPA and hours of remixes, B-sides and previously unreleased tracks, it’s well worth shelling out the extra dough for the U2 fan. Between all the bonus material, there’s enough to make a brand new CD Mix. And beyond the audio, there’s four DVDs added to this super set, a hardback book and 16 art prints. The ultimate gift for the ultimate U2 fan.
Purchase U2 – ACHTUNG BABY – SUPER DELUXE EDITION Here 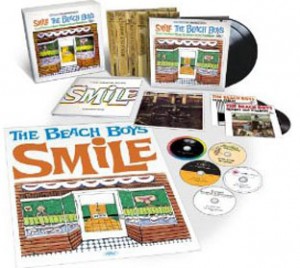 THE BEACH BOYS – THE SMILE SESSIONS BOX SET
Suggested Retail Price: $139.99
Cool Yule Factor: The long-awaited lost SMILE masterpiece that reportedly made singer-songwriter Brian Wilson go insane is finally released in this lavish box set. Although Wilson put out a reconstituted/re-recorded version of SMILE a few years back, his vocals had aged and some of that youthful vigor of the work had been lost. Now, Capitol has dug deep into the archives to not only present the album the way Wilson had intended, but also add endless amounts of demos and separated tracks to see how layered and complex this masterpiece truly was. The box set provides  the CDs, some vinyl albums, a book with liner notes and more. SMILE is still challenging all these years later, but it’s still stands as one of those great, lost works that’s finally commercially available (granted a few decades too late). If you don’t want to spring for the full enchilada for your Beach Boys aficionado, there’s a cheaper double disc set that’s priced under $25.00.
Purchase THE BEACH BOYS – THE SMILE SESSIONS Box Set HERE 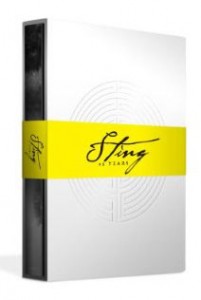 STING – 25 YEARS BOX SET
Suggested Retail Price: $119.99
Cool Yule Factor: The former Police frontman ventured out on a just as successful solo career and this box set corrals the best tracks from this highly eclectic time. Mixing pop, rock and jazz – Sting never settled for being ordinary which made his work brilliant at times, frustrating at others. Still, with 3 CDs and 1 DVD, this is a great capsule of what the artist is about. In addition to the obvious hits (including the elegant “Fields of Gold”), the set also offers up remixes that jazz up many of the classic tracks that will satisfy fans who have it all.
Purchase STING – 25 YEARS BOX SET Here 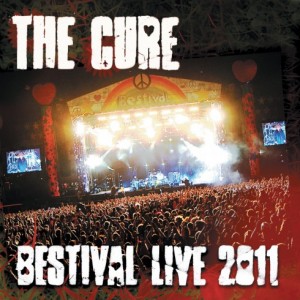 THE CURE – BESTIVAL LIVE 2011
Suggested Retail Price: $18.46
Cool Yule Factor: Live albums are a dime a dozen, but when it’s the Cure, all is forgiven since the band and its leader Robert Smith has always been generous with their bulky and comprehensive live discs. This release arrived with very little fanfare earlier this month, but it’s perfect gift with 33 tracks spanning the band’s alternative music career. Smith still sounds great with his strained Goth wail, but it’s the way the music has been reworked live this time that makes this a must. Much of the pop polish that made 1990s songs like “Friday I’m In Love” a bit unbearable, have been reworked in a more rocking fashion. Yes, there’s the dated synth strains peppering songs throughout, but that’s what makes the Cure, the Cure, and well, pardon the pun, just like heaven.
Purchase THE CURE – BESTIVAL LIVE 2011 Here