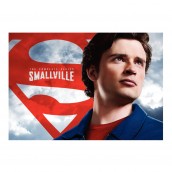 Mega sets for the TV minded including THE KIDS IN THE HALL, FUTURAMA, THE SIMPSONS, SMALLVILLE and BASEBALL'S GREATEST GAMES 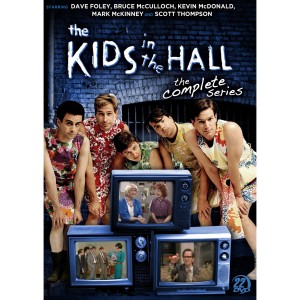 THE KIDS IN THE HALL - COMPLETE SERIES | ©2011 A&E Entertainment

THE KIDS IN THE HALL: THE COMPLETE SERIES
Suggested Retail Price: $99.95
Cool Yule Factor: The Canadian comedy troupe consisting of Dave Foley, Bruce McColloch, Kevin McDonald, Mark McKinney and Scott Thompson cranked out five hilarious seasons of their sketch comedy series that bested much of what SATURDAY NIGHT LIVE was doing through the 1990s. The closest thing to compare the series to is MONTY PYTHON’S FLYING CIRCUS and this quintet created memorably bizarre characters, strange catch phrases and an almost surreal outlook on the world. Cross-dressing was also a big thing with the boys. This new set also includes last year’s reunion mini-series DEATH COMES TO TOWN which may not have been as funny as their feature film BRAIN CANDY, but definitely kept the anarchic spirit of the original series. Like all A&E box sets, this one is filled to the brim with interviews, audio commentary, archival footage and tons more. Now if Paramount would only release BRAIN CANDY on Blu-ray with all of those rumored deleted scenes, the KIDS IN THE HALL collection would truly be complete.
Purchase KIDS IN THE HALL – THE COMPLETE SERIES here 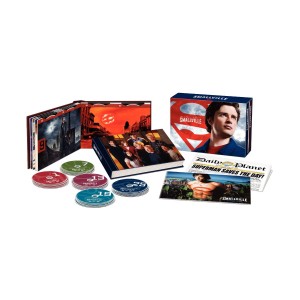 SMALLVILLE – THE COMPLETE SERIES
Suggested Retail Price: $339.88
Cool Yule Factor: Yes, SMALLVILLE lasted 10 whopping years on TV. That’s pretty impressive for a superhero series – and even more impressive was the level of quality the series attained throughout its entire run. In fact, the producers had an entire final season to plan its exit strategy and it provided some of the best episodes yet – all leading up to Tom Welling finally strapping into that suit and taking flight. You have to be Superman to lift-up this gargantuan box set that features all 218 episodes on 62 DVDs. Yes, 62 DVDs. Chances are, SMALLVILLE fans probably own the previous nine seasons, but this set is a must for all the bells and whistles that have been thrown in. (including 5 hours of new content). There’s a retrospective featurette on the making of series, a great DC Comics documentary, a look back at SMALLVILLE at Comic-Con, the pilots for AQUAMAN and the 1961 ADVENTURES OF SUPERBOY. There’s even footage from 2004’s Paley Fest event featuring the cast and crew. The set is also lovingly packaged in two hardbound book like cases with artwork and handy sleeves, a 32-page episode guide and a replica of the DAILY PLANET newspaper created by DC. While the SUPERMAN movies petered out after the second film, SMALLVILLE stayed vital, engaging and wholly enjoyable for a solid ten years. Welling was a great Superman, but even moreso, Erica Durance transformed into one of the best Lois Lane’s ever (even, dare I say, besting Margot Kidder).
Purchase SMALLVILLE – THE COMPLETE SERIES here 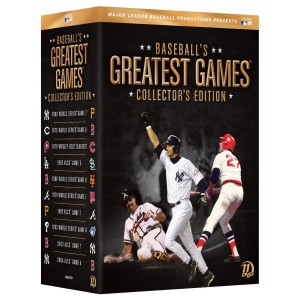 BASEBALL’S GREATEST GAMES – COLLECTOR’S EDITION
Suggested Retail Price: $99.95
Cool Yule Factor: Arguably, picking 10 of the Greatest Baseball games in the history of baseball can be a futile task. You’re not going to be able to please everyone – plus, getting access to material prior to 1960 is not going to be the easiest task. The set is heavy on post 1985 games, but it does include Game 7 of the 1960 world series as well as 1979’s Wrigley Field “Slugfest”. These are complete games, not highlights, and it features four games with the Boston Red Sox and three games featuring the New York Yankees. A bonus disc is included with additional interviews and other archival footage from the games featured here. This is a must for all die-hard baseball fans
Purchase BASEBALL’S GREATEST GAMES – COLLECTOR’S EDITION here 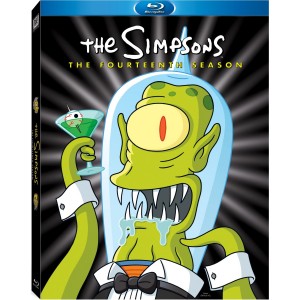 THE SIMPSONS – THE FOURTEENTH SEASON
Suggested Retail Price: $59.99
Cool Yule Factor: Another reminder that even in those “off” years of THE SIMPSONS still provides plenty of laughs. This set from 2002 has one of the better TREEHOUSE OF HORROR’s (gun toting zombies invade Springfield, ‘Nuff said) and it also has such episodes as Marge getting breast implants, Lisa and Bart ending up in the same grade and Ned dating a movie star. Loads of commentaries and special features – plus you get Kang (or is that Kodos) gracing the box art for the very first time. You can’t go wrong gifting THE SIMPSONS – ever.
Purchase THE SIMPSONS – THE COMPLETE FOURTEENTH SEASON here 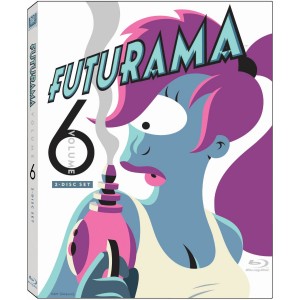 FUTURAMA VOLUME 6
Suggested Retail Price: $39.99
Cool Yule Factor: Matt Groening’s other animated series is just as inventive and dare I say, smarter, than THE SIMPSONS. It’s recent resurrection on Comedy Central finds the latest DVD volume chock full of great new episodes. Bender plays heavily this season and the standout episodes include the hilarious “Law & Oracle” (Fry joins the police academy) and the season finale “Reincarnation” where FUTURAMA offers up three vignettes in three completely different animation styles. A classic to be in years to come. Deleted scenes, commentary and more round out this set for the FUTURAMA die-hard and perhaps THE SIMPSONS fans who don’t realize FUTURAMA is just as good for them as Homer and the gang.
Purchase FUTURAMA – VOLUME 6 here