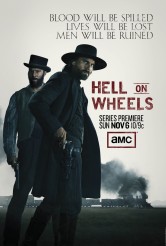 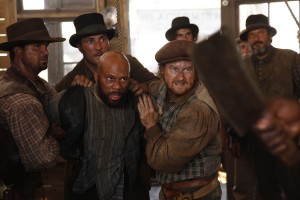 AMC’s HELL ON WHEELS, which airs Sundays at 10 PM, is a historical Western drama based in fact. Right after the American Civil War, Thomas “Doc” Durant (played in the series by Colm Meaney) really did set out to build a cross-Continental railroad with government funds and underpaid workers.

With this as a narrative foundation, series creators/executive producers/brothers Joe Gayton and Tony Gayton have crafted a story focusing on Cullen Bohannon (Anson Mount), a Confederate veteran seeking vengeance on the men who killed his wife. Other major characters are Elam(Common), a former slave avenging wrongs done to him, Lily Bell (Dominique McElligott), an Englishwoman who finds herself in the rail workers’ camp, and the local Native American tribe who are violently opposed to the railroad.

Joe Gayton talks to us about writing and running the show with brother Tony, and generally trying to get their trains to run on time.

ASSIGNMENT X: Did you and Tony Gayton have the slightest interest in trains before you got involved in HELL ON WHEELS?

JOE GAYTON: No particular interest in trains, but we loved this story [of building the railroad], especially the idea of setting a Western against it, and it’s a great image, because it’s steel and it’s industrial and it’s going across this beautiful pristine landscape, so we’ve gotten a lot more interested in trains as this has gone along.

AX: Regarding the Cullen Bohannon character – and don’t misunderstand, I wouldn’t want to see somebody who believed in slavery held up as a hero –

AX: But if you looked to Hollywood, you would almost never see one Civil War Confederate protagonist who believed in slavery. Cullen is a rarity in that he’s a protagonist who’s a former slave owner who isn’t meant to be hateful. Did you have any thoughts of, “Maybe we should make him a Northerner, so as not to go into that”?

GAYTON: Never. This is so much more interesting and compelling, because it gives him so far to go. If you’ve got a Northern character who doesn’t like slavery and doesn’t have prejudice – and a lot of Northern guys [were prejudiced – he doesn’t have as much room to change]. That’s interesting to us. Because this guy can change. And through this relationship with Elam, it’s this great, complex relationship, where they’re coming from the same world from totally different points of view. We thought, “No, no, let’s push that.” It’s not black and white. It starts out as a revenge story. He is a slave owner. But this guy is confused and complex and you’ll see that it works really well.

AX: Speaking of character complexity, you very rarely have a character in anything stand up and say, “I’m the villain,” which is exactly what Colm Meaney’s Durant character does – at least, he says, “I’m prepared to play the villain.” Did you just have that speech lurking in your subconscious, dying to be written?

GAYTON: Actually, my brother wrote most of that. I think it sort of came in a gush. I love that and I give him full credit for that. I think he sort of woke up one morning and it just came spewing out [laughs].  [Durant] does live by that, but again, we want to find that there’s bad in everybody and there’s good. And there’s inhumanity in everybody, and there’s also humanity. So we want to continue, even in a character like him, to find moments of humanity, which makes it better than just that sort of straight-ahead black and white villain.

AX: How do you and your brother collaborate with one another?

GAYTON: Well, we’ve been in the feature world for most of our career. We wrote one pilot for Fox that got picked up, we shot the pilot and the show didn’t get picked up. And this is our second foray into television. We love collaborating, we love coming up with the ideas, we love writing the scripts, and the process is terrific, and I can’t think of anybody I’d rather be doing it with than him. The way we do it is, we’ll sit down and come up with a story, and one of us will write the first draft, the other one will write the second draft, and we just sort of rewrite it. People say we have the same brain, so we sort of pass it back and forth and we become kind of interchangeable. 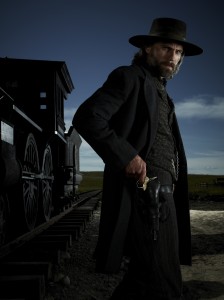 AX: Did you particularly want to do a television series to tell a longer story than you could in a feature film?

GAYTON: Yeah. I think that is the advantage. You get to stay with a character for a long time. But also, the creative control you have in television is so much better than in movies. I’ve made my career in writing screenplays, mostly that never get made. I’ve seen so many scripts that I write and I love – they fire me, they hire six other writers to rewrite it [laughs]. I thinking this case, we’re kind of the boss, which is great.

AX: How easy or difficult was the casting on HELL ON WHEELS?

GAYTON: It was a great process. We saw a lot of people, and I think we got exactly the right group. I’ve been saying with Anson, we always wanted to find our George Clooney before he did ER and I think we got him, I think this is the guy he was born to play.

AX: Dominique McElligott is actually Irish, but she uses an English accent to play Lily Bell. How did that come about?

GAYTON: We wrote her as an American, but we heard a lot of women with British accents and thought, “Let’s just make her British.” Talk about a fish out of water. There’s this aristocratic British woman who’s out in the wilderness with her husband, so we changed it as we had the actresses coming in.

AX: Were there any things that were tailored to the actors you got, that once you had them, you thought, “Well, let’s make the character a little more this way or that way”?

GAYTON: I don’t think so. I think we’re finding that as we go along that we start writing more toward that character, we start understanding our characters better through the actors.

AX: In terms of hands-on production, what do you and your brother do?

GAYTON: Well, one of us is on set at all times. Either I’ll be here [in Los Angeles] and he’ll be up there, or vice-versa. In terms of the post-production, we’re involved in every single aspect, which is great. The writing is always the absolute number one priority.

AX: You’ve said elsewhere that there have been nothing but challenges shooting on location in Alberta, Canada. Is there anything that was easy?

GAYTON: Well, I wouldn’t say easy, but as big as the challenges have been, I think it’s all gone pretty smoothly. You just go with it. When you have a hailstorm up there, you go, “Okay, hailstorm, quit for awhile, keep shooting. Oh, it’s raining over here, let’s go over there.” So you get this improvisational kind of thing going on, and it immerses you in the world. You use your challenges to your advantage, I think, and the fact that you don’t have a lot of money to make this show – you find better ways from a character point of view to solve your problems, I think. So you can use your lack of money to your advantage sometimes.

AX: What are broadcast standards like on AMC in terms of what you can and cannot say and show?

GAYTON: I think they conform to pretty much all cable. You have a certain amount of curse words that you can use. This is basic cable, not premium cable. So we get two curse words – two of the bad words per episode, and if we do any more than that, we have to find a new word for a certain word. We used “shite” – that made it okay [laughs].