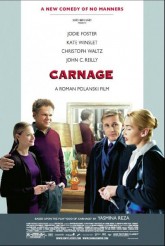 A well-acted four-hander that is smart but still lags

CARNAGE is adapted from Yasmina Reza’s stage play GOD OF CARNAGE, which has performed to hugely successful runs in London,New York and Los Angeles (among other cities). It’s easy to see how it could be funny, or at least funnier, on stage, where we can see how all four of the characters interact with each other at once, so that we’re always getting action and reaction at the same time. On film, although the performances are largely excellent – Christoph Waltz is especially adroit – the timing lags. A lingering close-up here, a trip to the elevator there, and the characters have a little too much time to think, regroup and respond for much of what goes on here to be humorous, and everybody is just a little too mean-spirited and inconsiderate for us to feel for them. The result isn’t actually that most dreaded of all results, an unfunny comedy, but rather an interesting piece with acute insights that nevertheless doesn’t quite convince us that it’s about real people and doesn’t make us laugh often enough for us to overlook its flaws.

In the play, we never see the inciting incident that leads wealthy married couple Nancy (Kate Winslet) and Alan (Waltz) to visit the New York apartment of well-off, though not quite so rich, married couple Penelope (Jodie Foster) and Michael (John C. Reilly). In the film, we do see Penelope and Michael’s young son Ethan gleefully order Nancy and Alan’s young son Zachary to go away, which is followed by Zachary picking up a tree branch and smacking Ethan in the face with it.

The bulk of CARNAGE is concerned with the fallout from this event. Although Ethan has suffered some knocked-out teeth, nobody is asking for financial compensation. Penelope in particular feels that the parents should all discuss what happened like adults, with an eye to getting Zachary to apologize to Ethan. Michael seems to be backing up Penelope and Nancy appears amenable to the idea, though with some reservations. Alan blithely thinks it will never happen – “Our son is a maniac,” he declares cheerfully – but he’s more concerned with conducting business on his cell phone than family matters. Over the course of the 79-minute running time, everyone will switch sides, change allegiances, and, of course, eventually announce what they really think, which doesn’t bode well for the marriages, let alone any sort of détente between the boys (who we don’t see again after the opening).

What director Roman Polanski and his co-screenwriter Reza want or expect us to do here isn’t entirely clear. We seem meant to laugh at these people at the same time we should acknowledge the unpleasant truths they reveal, but while at the outset, there are moments that are outrageous enough to be funny, the humor stops as the characters get more and more self-involved and self-righteous. Waltz gets the most mileage out of his character, partly because Alan is so absorbed in his own matters and so determinedly disconnected from those around him that he virtually has to psychologically reboot to talk to present company. Reilly treads the line between genial “regular” guy and lout with skill and naturalism, and Winslet gives Nancy a becoming patrician quality that serves her reticence well – until the reticence evaporates and we start questioning why she didn’t bring up her issues at the outset. (Most mothers would.) Foster as Penelope is playing the one character who has a set of beliefs she can articulate, even if the script makes the point that she holds to her humanism the way some other folks cling to unexamined religious faith – that is, it’s less a firm conviction than it is an emotional crutch. It’s a difficult role and Foster may be foiled here by her own intelligence as an actress – she seems to be struggling with Penelope’s lack of self-awareness.

The staging of some sequences becomes an issue. As well as the aforementioned matter of the timing being changed by close-ups, two-shots and the like, opening up the play causes us to come to conclusions about things we seem to be meant to wonder about, and wonder about other things that we’re supposed to take for granted. As we do see the violence between the boys, there’s no ambiguity about what actually happened. Meanwhile, when Alan and Nancy get as far as the elevator, it feels very strange that they don’t get on it and leave.

CARNAGE presents us with a situation that isn’t common to most films, which is in its favor. It makes some good points and has some interesting nuances. Mostly, though, it’s like being realistically stuck in a room with four increasingly unpleasant people, listening to an argument that we can neither empathize with nor enter ourselves.