The actress talks about the duality of her ghostly character 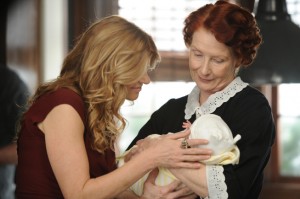 In AMERICAN HORROR STORY, which has its first-season finale (it’s been renewed for a second) tonight on FX at 10 PM, some ghosts appear as rotting phantoms and others appear alive and tangible. One ghost, however, is so complex that she’s actually played by two actresses. Frances Conroy is the primary incarnation of perennial housekeeper Moira O’Hara, starchy and generally reserved, but her seductive younger self is played by Alexandra Breckinridge. Which version of Moira we see depends largely on who is looking at her – we realize that protagonist Ben Harmon, played by Dylan McDermott, is starting to wise up when he at last sees Conroy’s Moira rather than the woman played by Breckinridge.

The ins and outs of the whys and wherefores of Moira are awfully tricky to figure out, and even more so to discuss. Asked which version of herself Moira thinks she is, Conroy replies, “I’m the self that I know who she is.” Then she laughs. “It’s getting into different realities and hallucinatory things and who’s seeing what? What’s going on? What’s the reality?”

AMERICAN HORROR STORY isn’t Conroy’s first foray into the supernatural on series television. The Georgia-born, New York-trained actress also starred in the short-lived HAPPY TOWN. Conroy is also known for her Emmy-nominated, Golden Globe-winning turn as the matriarch on five seasons of SIX FEET UNDER, as well as her prolific stage work on and off Broadway.

ASSIGNMENT X: Had you worked with AMERICAN HORROR STORY co-creator/exec producer Ryan Murphy before this?

FRANCES CONROY: My dear friend Richard Levine was one of the writers/producers with Lynnie Greene on NIP/TUCK [an earlier series of Murphy’s], and I met Ryan at Richard and his wife W.J.’s house at a party they gave for their son. So it was lovely to meet him. And then I did an episode of NIP/TUCK where I played a woman whose chimpanzee ripped her friend’s face off. It was lovely to be on the show. And then I was told that Ryan wanted me to be in this. I was doing another pilot of a very funny sitcom that Jenna Elfman was starring in, called BAD MOM. We shot it in Orlando, and everybody thought it would go. It was a funny part – it was [Elfman’s] mom, an older woman who had come back from a cruise and had fallen in love with a man who proposed to her, and she was being used as a doormat by her daughter to baby-sit for the kids, and ABC loved it.

And then I heard from my agent. There were so many things going on at the same time. I went in and read for [AMERICAN HORROR STORY] and I had a wonderful time reading. The man that ran the session was really, really good, because running a session with an actor, it’s such a delicate thing, and he said, “Oh, Ryan’s such a huge fan of yours,” and we were talking about NIP/TUCK, and THE MENTALIST [episode] that I did, and he said, “Yes, that’s part of our family, too,” so it was a really wonderful half an hour or so of being in that room. I think Ryan was waiting to see which pilots would be picked up, because then it would tell him which actors were available that he was interested in. And when this pilot, BAD MOM, wasn’t picked up, not long after that, I learned that he was interested in me playing this role.

AX: You have an interesting role-sharing situation with Alexandra Breckinridge. Have you ever had a situation before where there are two current versions of your character?

CONROY: I don’t think so. I just think that it’s very interesting that this person, Moira, who’s a housekeeper in this old house, is seen by different people in the story as a very different person. And I love that, it’s great. The way Dylan’s character sees this person Moira is much different than his wife or his daughter, and wow, that says a lot about each of them and their relationship and what’s going on in the marriage [between Ben and Vivien Harmon]. No, I’ve never had this sort of delightful thing going on.

AX: When you first read the script, was it a bit confusing, with two versions of your character?

CONROY: I don’t remember being confused – I remember being scared, thinking, “Wow, this is kind of going in underneath the skin here. This is creepy. It’s getting into nightmare territory.” But it was awfully interesting to read.

AX: Is it difficult playing a character who is so defined by other characters’ perceptions?

AX: How is Ryan Murphy to work with as a director?

CONROY: Wonderful. He’s specific, he lets an actor find things and then he’ll give a little note. And he’s very pleasant. You can feel him taking it in, watching the scene and where it’s going. I was saying before that he’s just very interesting to stand near him, to sit at the monitor, because you can hear his mind humming. He’s just thinking through so many things and seeing in the back of his head what’s going on while he’s watching [something else]. 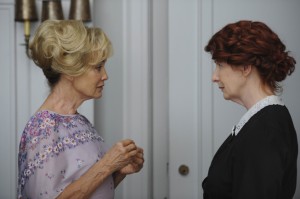 AX: Had you worked with any of your AMERICAN HORROR STORY costars before this?

CONROY: No, no. In fact, it was really nice – Denis [O’Hare] and I met on the two days of promo work, because we’d heard of one another for years in New York, and we’d never met or worked with together. So that was nice, to finally meet. And especially since we’d both worked with Alan Ball [who created both SIX FEET UNDER with Conroy and TRUE BLOOD, which has featured O’Hare] . So I thought, “Oh, isn’t this sweet – we’re family!” [laughs]

AX: Were you a fan of the horror genre before getting involved in this?

CONROY: I’m too scared to watch those things [laughs].

AX: Are you able to watch AMERICAN HORROR STORY?

CONROY: I was in STONE with Robert De Niro – that came out a while ago. I played his wife. And I’m in a film called BLOODWORTH that Kris Kristofferson and Dwight Yoakam and Val Kilmer are in. That was at the Santa Barbara Film Festival last year in February, and they liked it so much, they gave it extra screenings. It came out on DVD. It’s a good movie, written by a Southern novelist named William Gay. Hal Holbrook did one of the stories. It’s like an American Greek tragedy. It’s a beautiful movie.

AX: Anything else you’d like to say about AMERICAN HORROR STORY?

CONROY: It’s just nice to be a part of it. There are lovely people involved.