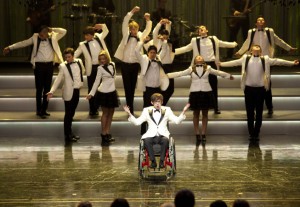 The joy of GLEE seems to be slowly seeping back into the show as “Hold On To Sixteen” (taken from a line in the John Mellencamp song “Jack and Diane”) reminds the characters and the audience, to hold on to that innocent young feeling before it’s gone.

With high school ending for many of the Glee core members, this episode is a wake-up call for them – and naturally there’s a bunch of house-cleaning, story-wise.

The big anchor is Sectionals, which is happening at McKinley High for the first time since the 1960s. There’s also the competing McKinley Glee club teams – New Directions and the The Trouble Tones vying for that one all-important spot.

New Directions, lacking Rachel (Lea Michele) due to her suspension, realize they need some new ammunition, so they go looking for Sam (Chord Overstreet) who is no longer homeless, but, in order to help his family, he’s now a male dancer at a ladies club (but telling them he’s working at a Dairy Queen).

While Overstreet could always sing, when all the characters was so happy he returned to McKinley and the Glee club, it seemed a bit, well, convenient and weird. Then something strange happened – you’re reminded that he did add something a little extra to the mix on the show last year. There was always something innocent, honest and likable about Sam. In fact, there is purity with his character that is somewhat lacking with many of the other character’s on the show. He was a balance, and he definitely balances out this episode (even if his song introduction was the weird country jig “Red Solo Cup”).

Once again Quinn (Dianna Agron) is back on her crazy warpath and is planning to get Ms. Corcoran (Idina Menzel) fired now that she knows about her and Puck (Mark Salling) sleeping together. For the third straight week, Quinn gets a huge lecture – this time by both Sam and Rachel. She’s talked out of ratting out Ms. Corcoran and is reminded to “hold on to sixteen”. It’s a good moment. 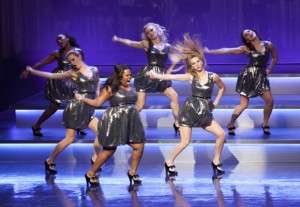 The one thing about Season 3 of GLEE, is the slow-build of these big moments, which is the smart way to go. Season Two had huge revelations pop up scattershot one week and forgotten the next. Here at least, there’s been a big build-up for Quinn’s character going loco and getting attacked for her crazy actions. She seems to redeem herself by episode’s end, yet, for all her craziness, it still seems like it would take a little bit more for her to hit rock bottom in order for her to come to her senses – slightly. Plus, I hate the character so much (after loving her character in Season 1), that I don’t think there’s going to be a way to truly get her to a place for audience’s to embrace her again.

Another big story point is the story between Tina (Jenna Ushkowitz) and Mike (Harry Shum Jr.). Mike has finally agreed to go to Stanford to become a doctor to please his dad, yet Tina worries he’s going to give up on his dancing dream and be miserable. There’s an about face, where Mike’s dad finally shows up to Sectionals – and approves, preferring his son follow his dream. Again, a little too pat for a show that’s very complex at times, but I loved the pay-off, so I’ll give it a little slack. At least this didn’t end like DEAD POET’S SOCIETY.

Some of the more troubling aspects of this episode are the horrible song selections – the quasi- Michael Jackson medley, while performed well, continues to remind me why I want Michael and The Beatles songs banned from singing competition shows and GLEE for good. It’s now getting to a saturation point of no return. Stop the madness now. You’re ruining perfectly good songs for eternity.

Sam’s dad also appears and he’s played by John Schneider. I really hope this throwaway cameo is more than a throwaway in future episodes. Love seeing the actor again – and he’s a perfect fit for Sam’s dad, but it seemed way too little screen time.

With most of the character conflicts finally being resolved this episode, it will be interesting to see what the second half of the GLEE season holds. It feels as if the show is getting things right more often than not lately, and even with merely okay episode like this, it’s still such an improvement over last year that it makes you realize there’s more mileage left yet in the GLEE franchise still.