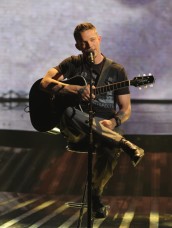 THE X FACTOR is down to the Final Five, and I’m so bored with the remaining contestants, going into the latest episode, I was prepared to be bored to tears.

After Drew got the boot last week (my fave singer), the five remaining have a lot to prove. Usually I list the judges comments, but it doesn’t matter what they really say tonight. Last week they proved they’re in it for themselves – not for voting for who is most deserving.

Yet, even more so, what is necessary now, is to determine and talk about who is worthy of a $5 million contract. Who has the chops, charisma and ability to take that $5 million and have longevity unlike most of the recent AMERICAN IDOL winners.

The final five sing two songs tonight – one is a dance hit, the other a song of their choice. So here’s this week’s recap: 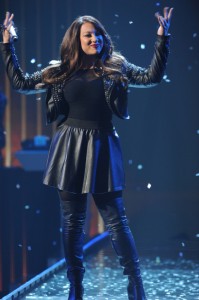 Melanie Amaro
Song #1: “Someone Like You” by Adele
What I say? She takes a soul tune and makes it danceable. She’s good, but I wouldn’t buy her album based on this song.
Grade: B
Song #2: “When You Believe” by Whitney Houston and Mariah Carey
What I say? She mixes it up a bit now, bringing it down a little bit and belting things out with that big Diva voice of hers. Again, good, but I ain’t buying an album of this.
Grade: B-
Is She Worthy of a $5 Million Contract? If you like the Mariah’s and Whitney’s of the world, but is there an audience of this kind of music still? She has the pipes, and maybe we do need someone to be the next Mariah, but there’s really nothing unique or differeante about her. She does have one of the best voices, that’s a plus. but tonight didn’t seal the deal for me. Maybe next week?

Marcus Canty
Song #1: “Ain’t Nobody” by Chaka Kahn
What I say? There’s a reason he was in the bottom for two weeks straight. He has a hard time holding a note and he can be a bit bland. He has moxie and charisma, but he wouldn’t last Top 10 on AMERICAN IDOL with a song like this.
Grade: C
Song #2: “A Song For You” by Leon Russell 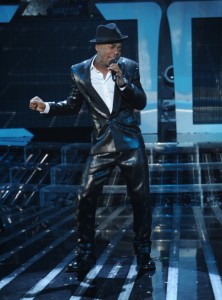 What I say? Now here’s what Canty should be doing. This guy has a soulful voice. When he focuses on his vocal and shows how much soul he has, he soars. Last week he was the most like Michael Jackson in terms of talent, but he was in the bottom because vocally he was just okay. This week, he fumbled at first, and really gave the second best performance of the night with this stripped down, no-frills version of a Leon Russell song. Some strings, a piano and a great vocal performance.
Grade: A-
Is He Worthy of a $5 Million Contract? Here’s the thing with Canty – give him the most amazing producers and songwriters AND the best choreography and this guy could be huge. However, he’s stumbled more times than he’s risen to the occasion. Yet, “A Song For You” shows you why he should stick around a little longer – but I doubt he’s gonna make it past this week after what the judges did to Drew last week. The public will vote and he will be a goner.

Rachel Crow
Song #1: “Nothin’ On You” by B.o.B.
What I say? Am I the only one hearing these vocals correctly. Canty was all over the place pitch-wise and now Crow sounded really thin and pitchy too. She has charisma and moxie too. I like her a lot, but I’m hating all of her song choices.
Grade: C
Song #2: “Music and Me” by Michael Jackson 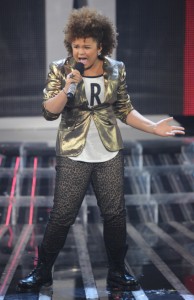 What I say? I really hate criticizing Crow, because she’s clearly talented, but it’s a level playing field, and you have to be honest in critiquing the Final Five regardless of age. That said, again, her vocals are somewhat strained. Not the best song for her voice, though moments were good. The big problem. Another FREAKIN’ Michael Jackson song. Didn’t I rant last week – stop the madness. No more Michael or the Beatles. I can’t take it anymore.
Grade: C
Is She Worthy of a $5 Million Contract? If this was a $5 million contract for singer, performer, comedian and actress – give it to this girl. She is going to be a huge star. She’s going to go far. She deserves everything she’s earned, even with the criticisms I’ve had other the past few weeks of awkward vocals and wrong song choices. Still, she’s a star – hands down. She’s handled herself brilliantly. She’s grounded. She’s level-headed. She will triumph no matter how this thing shakes down. In terms of her vocals tonight though – didn’t care for them, and I’m still concerned what type of album she’ll produce because she’s an inbeTWEENer– she’s got an aged voice that works for adults, but it might be too rich for tweens. She needs to decide soon who she is in order to win the show, but I would also be thrilled to see someone like her make it to the finals.

Josh Krajcik
Song #1: “We Found Love” by Rihanna
What I say? After last week’s misstep, I was unsure if he could pull off a dance song, but he did a really good job taking a the Rihanna track and doing something all his own with it. I’m not in love with it, but at least the guy can sing.
Grade: B
Song #2: “Something” by The Beatles 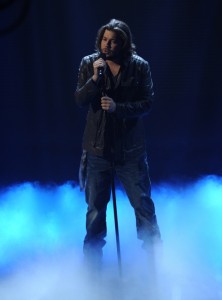 What I say? The Beatles!!! Aggggggggg!!! I’m just about done with these reality singing competition. Krajcik takes it down a notch, and he can sing, but didn’t care for it. And it gets knocked down a few pegs because it’s The Beatles.
Grade: C
Is He Worthy of a $5 Million Contract? He was my second favorite person on the show, but he’s lost his way in the last couple of weeks. I hate to say this though, he’s not worth $5 million. He can be successful and make great records, but, like IDOL’s guy winners in the past (Kris Allen and Lee DeWyze come to mind), I don’t think he would end up making an album people would buy, because he would be homogenized by the record label. He’s the guy that needs to be the frontman for a band. Going out as Josh Krajcik is the predictable route. He needs to be like Daughtry and pair up with a great band and create songs and a sound that can take them places. If he wins, they’ll get him some top-notch songwriters and producers, but it will end up a couple of  shades better than the Allen and DeWyze albums, the disc will tank and he’ll be forgotten before THE X FACTOR season 2 arrives. The best thing that can happen for him is to not win this. Yeah, it’s $5 million on the line, but he can make that and more if he uses this venue to propel his career on his own terms.

Chris Rene
Song #1: “Live Your Life” by T.I. and Rihanna (with an original rap)
What I say? Here’s someone who has talent as a rapper, yet every time he tries to sing, I just feel he’s struggling. I’m starting to wonder if the sound mix on the show is off. I wasn’t feeling it. The guy has a great story, but can he sell records and if so, what kind of artist will he be?
Grade: C+
Song #2: “Where Do We Go From Here” by Chris Rene (an original song)
What I say? After questioning his last few performances and wondering who or what kind of performer Rene is or wants to be, he comes out with his guitar and sings an original song. Screw all the other crap he’s been doing – this is him. He can sing. He has a voice. He’s an original. If he would have captured more of this throughout the competition, I would have been 100 percent in his court. Now, all I can say, is, he’s the guy. He’s the one who should win. An amazing song – and probably the first song of the entire U.S. run of THE X FACTOR that I would download.
Grade: A
Is He Worthy of a $5 Million Contract? Of course. After the original song, it’s clear, that’s what he should be doing. The rapping, the dance songs, the ill-advised song-choices – this is his sweet spot and this is where he should be. Sing your own damn songs and show the judges why you deserve to be here. Finally, someone has stepped out in front and proven why he should be there – and why he deserves the $5 million. He has crossover potential. His voice is unique, and yet, until tonight, I didn’t realize how good a singer he could be.

So who will be in the bottom two? Marcus Canty and Josh Krajcik.

Who will go home? Two weeks in the bottom for Canty, and I believe this will be Week 3. Krajcik needs to go home so he can use the newfound popularity to escape getting drained of any identity he has if he were to win this thing. However, with both in the bottom, the judges have the final say and I think they’ll spare Krajcik rather than Canty.

Tags: 8 Mile, Across The Universe, Ain’t No Other Man, Astro, Cadillac Records, Carwash, Chris Rene, Christina Aguilera, Coldplay, Coolio, Dance Music, Dangerous Minds, Drew, Eminem, Etta James, Fix You, Fox, Gangsta’s Paradise, Get Smart, How to Lose a Guy in 10 Days, I Wanna Love Somebody Like You, I’d Rather Go Blind, I’m Going Down, Josh Krajcik, judges, karaoke, Keith Urban, Lakoda Rayne, Leroy Bell, Lose Yourself, Man in the Mirror, Marcus Canty, Me And Dupree, Melanie Amaro, Michael Jackson, music', Queen of the Night, Rachel Crow, Rose Royce, Runaway Bride, Season 1, singing, Stacey Francis, Still haven't Found What I'm Looking For, television, The Beatles, The Bodyguard, The Final 11 Perform, The Stereo Hogzz, The X-Factor, This Is It, Top 5 Perform, U2, Whitney Houston, With a Little Help From My Friends, You