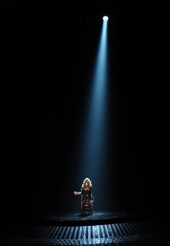 Marcus Canty, Drew and Melanie Amaro are the clear victors this night 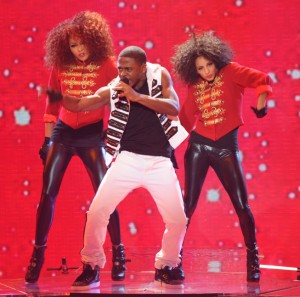 I’ve said it before, I’ll say it again. PLEASE put a moratorium on “Beatles” week and “Michael Jackson” week on these competition shows. It’s overdone. Yes, there’s a Michael Jackson Vegas Cirque du Soleil thing going on in Vegas right now, but do we really need to need more butchering of Jackson’s music?

Thankfully, there weren’t a lot of obvious songs in the mix on this week’s THE X FACTOR which is now whittled down to The Top 7, but where was the singing? Once again Astro raps (yes, I get that’s all he can do), but he butchers “Black or White” instead of transforming it into something that pays homage to the original yet adds a cool rap in the mix. He’s still doing the same thing week after week.

Surprisingly Josh Krajcik stumbled badly with “Dirty Diana” – should have picked another song, as should have Chris Rene.

Standouts, again, were Drew and Melanie Amaro. And Marcus Canty best embodied Michael Jackson out of all the performaces of the night.

So here’s this week’s recap:

Josh Krajcik
Song: “Dirty Diana”
What the judges said: L.A. Reid – “That’s the first time you stepped out of your comfort zone … you landed on your feet”; Paula Abdul – “a showstopping performance”; Simon Cowell – “As a spectacle it was great … however, you were over-produced, you got lost in all your choreography … this is not you on stage … it was your worst performance”; Nicole Scherzinger – “Michael is so inspiring, we feel him our veins, he’s powerful, he’s dangerous and that’s what Josh did this week.”
What I say: I think he is the best of the guys that are remaining, but Krajcik second-guessed himself so much he psyched himself out and got really got lost. Simon was right. He didn’t sound very good at the beginning, he rocked the song out too much and the only signs of life was the guitar playing midway through. I hope people vote to keep him in, because he deserves to be there, but as far as performances go, this was his weakest to date.
Grade: C

Astro
Song: “Black or White”
What the judges said: Nicole – “I don’t know if this is your best performance”; Paula – “I think your words are important. I think you’re influential and inspirational … I think you could win this competition”; Simon – “that’s what someone your age should be doing … taking classic song making it younger and for a new generation”; L.A. – “I’m proud of you and I’d like to think the Jackson family is just as proud.”
What I say: Please send this kid home. I get all he knows how to do it rap, but the raps sound that same every week. And if you’re going to rap to “Black or White”, is it possible to at least try to sing – if you can do it. Is it possible to try something different other than screaming your rap lyrics. There are rappers who know how to change it up, but he isn’t doing that. He’s just repeating himself over and over – and it’s incredibly boring. Right now he’s become a novelty act. The novelty has worn off. When will become the artist that will deserve that $5 million dollars? And why are the judges still sucking up to him. It’s disgusting.
Grade: D

Drew
Song: “Billie Jean”
What the judges said: L.A. – “You took ‘Billie Jean’ and made it your own”; Nicole – “You sounded beautiful and it’s exactly what I expected and Simon – you’re playing it safe with her”; Paula – “This was your best vocal performance, however, Simon, on a week of Michael Jackson, you chose to have nothing visual”; Simon – he just attacked Paula and Nicole for attacking him
What I say: Pretty amazing. Simon stripped her down to the core and gave her a really challenging song to do – transforming it from a mid-tempo track to a ballad with her and just piano accompaniment. Pretty awesome. I still feel, consistency-wise, she deserves to win.
Grade: A-

Rachel Crow
Song: “Can You Feel It”
What the judges said: L.A.- “This is probably the other time I’ve watched you and didn’t believe you were really having a good time”; Nicole – “I thought you did a really good song and I didn’t feel a connection between you and the world around you on stage”; Paula: “I don’t feel the song gave you justice of how serious a singer you are”; Simon – “You always put on a show – you look like a pop star and having the time of your life.”
What I say: The wrong song for her. She has a great voice, but the last two weeks, it sounds like she’s struggling to hit all the notes and stay on key. She’s really good, but it’s still really hard to understand who she is an artist and who she would appeal to. She sings like an Adele, but people who like Adele won’t be able to connect with her if she sings songs like this on a full album. It’s an identity issue – she’s talented beyond her years, but maybe she has to find out who she is and what kind of artist she should be that will actually sell records.
Grade: C+

Marcus Canty
Song: “P.I.Y. (Pretty Young Thing)”
What the judges said: Nicole – “I love you P.Y.T. … you’re the whole package”; Paula – “What a beautiful homage to the late great Michael Jackson … you are the whole package”; Simon – “The vocals weren’t very good”; L.A. – “It was an inventive arrangement of the song, you did a great job.”
What I say: Finally a perfect fit. I totally disagree with Simon. Canty gets a great song and does it justice, bringing his own vocal stylings to the song and showing he’s a pretty powerful performer. I haven’t taken much notice of Canty, but this vocal and performance really shows he has some chops and potential to make it into the finals. It’s also nice to finally see someone truly embodying the spirit of Michael Jackson the first time during the entire night.
Grade: A-

Chris Rene
Song: “I’ll Be There”
What the judges said: Nicole – “I loved you up there tonight”; Paula – “You looked the best you ever looked – you manifest with abundance in the heart department”; Simon – “The vocal was a little bit shaky at the top … the rapping was much better”; L.A. – “I think the performance speaks for itself.”
What I say: Kind of a cool story with him in that his grandfather was the songwriter of “Rockin’ Robin” which the Jackson 5 performed. Then what does Rene do? He decides to perform “I’ll Be There.” Pull the rug out from under us. Not a great performance sadly. “I’ll Be There” is totally the wrong song. It’s out of his range. Sorry, Chris. You missed a great opportunity. You should have done “Rockin’ Robin.” Torturous!
Grade: D

Melanie Amaro
Song: “Earth Song”
What the judges said: L.A. – “For one second, I forgot we were in a competition and I felt we were at a Melanie Amaro concert … it may be the best of the night”; Nicole – “Not only was it the best of the night, it was one of the best performances I’ve seen on the show”; Paula – “It was flawless … and you nailed it”; Simon – “I could not be more proud.”
What I say: I’ve never been a fan of this song, but I think Amaro did a really good job with it. It gave her a chance to show off her vocal softness and also how to rock out. Really good job. She will get a recording contract and do well without without this show. Very talented girl.
Grade: B+

So who will be in the bottom three? This is getting tough, but Chris Rene will be there, Astro and I think, maybe Rachel Crow.

Who will go home? Chris is gone, and I think this may finally be Astro’s week to get the heck out of here. He’s not as good as everyone thinks he is. He needs to grow up and learn humility

Tags: 8 Mile, Across The Universe, Ain’t No Other Man, Astro. Drew, Cadillac Records, Carwash, Chris Rene, Christina Aguilera, Coldplay, Coolio, Dangerous Minds, Eminem, Etta James, Fix You, Fox, Gangsta’s Paradise, Get Smart, How to Lose a Guy in 10 Days, I Wanna Love Somebody Like You, I’d Rather Go Blind, I’m Going Down, Josh Krajcik, judges, karaoke, Keith Urban, Lakoda Rayne, Leroy Bell, Lose Yourself, Man in the Mirror, Marcus Canty, Me And Dupree, Melanie Amaro, Michael Jackson, music', Queen of the Night, Rachel Crow, Rose Royce, Runaway Bride, Season 1, singing, Stacey Francis, Still haven't Found What I'm Looking For, television, The Beatles, The Bodyguard, The Final 11 Perform, The Stereo Hogzz, The X-Factor, This Is It, Top 7 Perform, U2, Whitney Houston, With a Little Help From My Friends, You