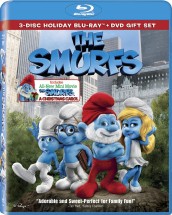 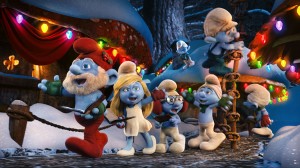 The Sony Animation Studios in Culver City, CA is a little blue on this chilly November morning. It’s because The Smurfs are preparing for the Blu-ray and DVD release of the hit summer movie of THE SMURFS based on the classic 1980s animated series wand the works by Belgian cartoonist Peyo.

This event was held to not only showcase all the anciliary features that make THE SMURFS home entertainment feature more than just a movie, but also to screen a brand new SMURFS short appearing exclusively on the Holiday Gift set – THE SMURFS: A CHRISTMAS CAROL.

Of the many extra layers to THE SMURFS is the “Smurf-O-Vision: Second Screen Experience.” If you have an iPad, iPhone or iTouch, your kids can interact with THE SMURFS Blu-ray and syncing it to the movie. This results in the Smurfs taking over your TV and your linking device – plus being able to engage in bubble popping and balloon popping activities and more. 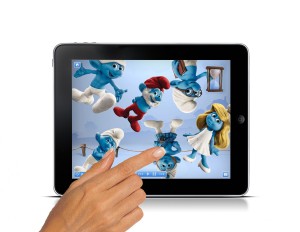 The second feature is “Holiday Quest” a new game on THE SMURF’S VILLAGE GAME available for free in the Apple App Store and the Android Marketplace.

Sony Home Entertainment has also entered into the cloud, by making this the first title to offer up UltraViolet which let you instant stream the movie on your P.C. or Mac.

And finally, there’s a new app titled “GoldRun” that allows people to take a picture and have a Smurf appear right next to you.

THE SMURFS Holiday Gift Set (out today) not only includes the Blu-ray and DVD, but also the short film THE SMURFS: A CHRISTMAS CAROL where Grouchy gets to see the error of his selfish un-Christmas ways. It starts off in the CGI animation seen in the film, but then segues into the 2D animated style of the 1980s TV show. It’s a cool mix and match and ends up making this a great bonus to THE SMURFS movie.

While at the event, A CHRISTMAS CAROL director Troy Quane and producer Kurt Albrecht spoke to ASSIGNMENT X about this Smurfy side project.

ASSIGNMENT X: I loved the CGI mixed with the traditional 2D animation on the short.

TROY QUANE: Stylistically, when we chose A CHRISTMAS CAROL for our storytelling, there is a very clear point where he goes into this dream moment where he is going to learn his lessons and it felt like a great stylistic choice to make it clear, this is him, in this different world where he’s learning about his Christmas spirit.

KURT ALBRECHT: I think it made sense from the start, because the characters existed in 2D for all those years. It’s more often than not the way people think of them. 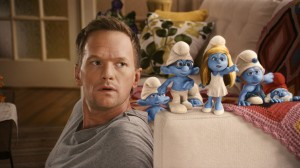 AX: How difficult was it creating the original animation style?

QUANE: I grew up in Canada and we grew up with the French language and the Peyo comics. I was a huge fan of the property before the TV series, so yeah, there was a lot of love. It was one of those inspirational pieces of art that got me into doing animation in the first place. When I started in the industry I was a traditional 2D animator – pencil and paper animator. Another reason to go into that style was an awesome chance to go play in that sandbox again.

AX: There’s only one reference to Santa in the whole thing – was there a reason?

QUANE: We didn’t want it to fall into any particular branch of story, we wanted to keep it true to who these little characters were and about the heart and soul of the story we’re trying to tell. We found, as soon as we started going down those paths, it drew us away from the focus of realizing what it’s about – it’s about his family. 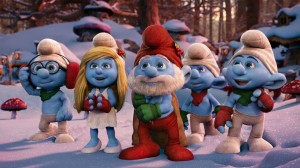 QUANE: It was really fast. They were about halfway through production on the feature. It was mid-December last year. We knew the DVD was coming out around the holiday, and it was the perfect opportunity. I think the date was December 21, they said, “go.” They brought in a writer and we wrote it over the Christmas holidays and from the moment they said go to the moment we finished was just under nine months.

AX: It’s really cool to see American audiences rediscover THE SMURFS, since they were the butt of jokes until the new movie came along.

ALBRECHT: I think once everything becomes nostalgic, once you get a generation later, that changes and it’s looked on positively.

QUANE: I’m currently in development on two films. One of them is POPEYE. It’s super early days. We’re just getting our toes wet with it. We’ve launched writers on it.

AX: Is it animated?

QUANE: Right now, the plan is for it to be fully animated. Again, super early days, but right now every intent is for it out be a fully CG animated film in 3D. It’s kind of a fun opportunity to take this character who has lived in this celluloid, flat existence and then not only throw him into CG, but possibly into 3D and it can be pretty spectacular.

AX: It’s a tricky character to translate – even the live action Robin Williams movie was a little odd.

QUANE: It’s a tricky character, but it’s always tricky. The same thing with THE SMURFS. With POPEYE you have 70 some odd years of history and mythology and you have fans who are rapid about this version or that version. So you’re trying to make all those people happy and introduce the new audience to them. You’re juggling a lot of things. I find that the fun and excitement of it. I showed my kids a picture of Popeye and they go “Popeye.” And I said, “tell me something about them.”  And they go “uhhhh.” They know who he is, but nothing beyond that. So there’s a lot of fun to say, “let’s bring this character in and sort of give him another life.” It’s a delicate situation. There’s a lot of expectation, so you want to make sure you get that right before you rush to a deadline. 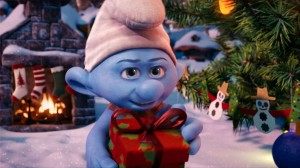 QUANE: Don’t worry. It will be the Popeye you know and love, but for a new generation. I will do my best to not have him rapping, but I can’t promise anything.

AX: Would you even entertain bringing Robin Williams in to do the voice?

QUANE: It’s super early. We’re not even in that situation, but it’s funny, whenever you mention Popeye, everyone pulls out their best Popeye impersonation form their back pockets. I think when we get to the point of casting, it will be amazing how many people will come out with an amazing Popeye impersonation. We’ll be surprised by the people who will come through.