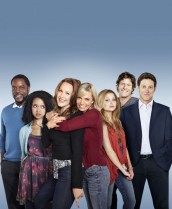 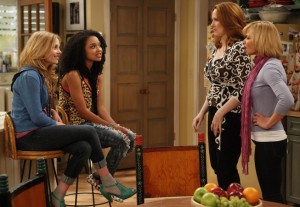 I did not have high hopes for I HATE MY TEENAGE DAUGHTER. The premise sounded unlikable and atrocious and  Fox hasn’t had much luck with traditional multi-camera sitcoms in decades.

That said, the series took me completely by surprise. I’m not the ideal viewer of the show, but I found myself suckered in. The ensemble cast is quite good and there are some pretty good laughs throughout.

The story follows two single moms – Annie Watson (Jamie Pressly) and Nikki Miller (Katie Finnerman). Their teenage daughters are Sophie (Kristi Lauren) and Mackenzie (Aisha Dee) and are much more popular than they were in high school and make their lives a living hell. When they cross the line by locking a handicapped boy in the girl’s locker room, the two harried mothers decide to punish their kids, but not without consequences to them.

It’s a rather simple premise, but it’s made all the more tolerable by both Pressly and Finnerman’s great comedic performances. The play off each other as if they’ve been doing this series for several years. Together, they’re one of the best sitcom pairings all season. They get the medium and they milk it. You like them, even as you hate their teenage daughters for putting them through hell.

That said, their daughter are pretty horrible, and aside from a couple small redeeming moments, the series is going to have to tone down the meanness and find a middle ground. Mackenzie has no redeeming qualities whatsoever and Nikki is rather bland and one-note. More dimension is needed to keep the show from making the audience hate their teenage daughters beyond the first episode.

The supporting cast is pretty good. We get to know both Annie’s ex-husband Matt (Eric Sheffer Stevens) a musician who is irresponsible and unreliable and Nikki’s ex Gary (Chad L. Coleman), a golf pro who caves into his daughter even more than his ex-wife.

The standout though is Kevin Rahm who plays Matt’s brother Jack. Rahm is very funny in the limited time he’s around. His comic timing in impeccable and I even laughed out loud at a couple of his line deliveries. It also appears that Annie has a thing for Jack, so there may be more comic gold to mine here.

I HATE MY TEENAGE DAUGHTER is better than it should be, and it has the cast and writing so far to give it a fighting chance. Then again, this being the only multi-camera sitcom on Fox, it might have a hard time finding a good programming partner on the schedule. It’s a show they should try to nurture and grow, because it’s the type of series that NBC or CBS would kill to have on their line-up. It’s not something I’d likely watch again, but I found it to be one of the rare new fall comedies that wasn’t a total waste of my time.