The actor talks about playing Robbie Reyes aka Ghost Rider 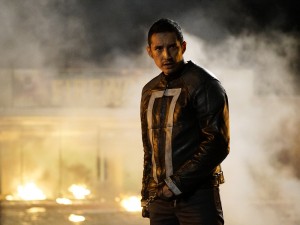 The Marvel Comics character Ghost Rider, in the person of Robbie Reyes, has come to MARVEL’S AGENTS OF SHIELD. Gabriel Luna plays Robbie on the ABC series, now in its fourth season on Tuesday nights.

Luna has had a busy few years. The actor from Austin, Texas, starred in the spy/soccer thriller series MATADOR on Robert Rodriguez’s El Rey Network, then had a supporting role in Season 2 of HBO’s TRUE DETECTIVE, then costarred as a police detective in ABC’s short-lived WICKED CITY. On the feature side, Luna appeared in last year’s FREEHELD and this year’s TRANSPECOS. He also costarred in last month’s Discovery Channel miniseries HARLEY AND THE DAVIDSONS as early 1900s motorcycle rider Eddie Hasha.

ASSIGNMENT X: What can you say about who you’re playing?

GABRIEL LUNA: I am playing Robbie Reyes, the all-new Ghost Rider. Ol Flame Brain, as he’s known in the comics sometimes. I can’t say too much, but Robbie’s from L.A., and at the end of Season 3 of SHIELD, Quake, Daisy Johnson, Chloe Bennet’s character, finds herself in L.A.

LUNA: You know what? I asked that question when I did my Skype meeting with [SHIELD executive producers] Jed Whedon and Jeph Loeb and all those people. But I was unaware of Robbie Reyes, and I was super-excited to discover that the Ghost Rider is a young Mexican-American superhero in the latest incarnation of the character. I was super-excited when I was talking to them, and then when I did my research, and realized that Robbie Reyes in fact drives a ’69 black Dodge Charger. That’s what he rides. So no motorcycle. [Earlier incarnations of Ghost Rider] Johnny Blaze and Danny Ketch, they did ride motorcycles; the very first Ghost Rider, Carter Slade, rode a horse. This is just an evolution of that idea. But I did ask. I said, “I thought I was going to put my new motorcycle skills to use in this.” But I’m driving around in a beautiful car, so I have no complaints.

LUNA: It doesn’t affect me. I’m there, they hire me to do a job and I do my best to execute it. Over at El Rey, it was brand-new and we were writing the rule book as we went along, and when the buck stops with Robert Rodriguez, you know there’s an absolutely nonexistent leash. So he let us go. And then there’s great prestige in working with HBO, and they’re always good to their people, they re-use people all the time. And then you get here [to ABC] and this is badge of honor. Network is another stripe on the arm.

AX: Do you feel slightly relieved to be going into a show that’s in its fourth season, instead of launching something new that might not last?

LUNA: Well, we had to build [MATADOR] from the ground up. WICKED CITY was last year, we had to build up. When I did TRUE DETECTIVE, I had a good feeling, because I was a huge fan of the first season, and I was so happy to be part of that history. But this history [with AGENTS OF SHIELD] is so big. It’s not just the show – to be part of this amazing show, with this amazing cast and crew who love each other like family. When I went to the first table read, it was so joyful – the whole room was bubbling with joy to see each other again, and they took me in, embraced me and included me as one of the members of their family, and it was great. 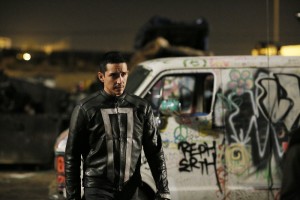 AX: Robbie Reyes is something of a rebel, but he’s essentially heroic. Your other characters have been mostly heroic as well. Do you ever want to play a villain?

LUNA: Yeah. I haven’t been asked to yet. I’m sure I could manage it, but when I speak with producers and show creators and show runners, they always tell me, “Gabe, there’s something a bit soulful about you. You’re young, but you carry yourself in this way.” And I end up playing this superhero kind of guy, which is great. I don’t have a problem with it. I’m enjoying it. And I’m going to do my best each time they give me the opportunity.

AX: And what would you most like people to know about AGENTS OF SHIELD?

LUNA: That we are Tuesday nights at 10. Same night [as the other seasons, but a later hour]. Now Standards and Practices will let us do a little bit more.

This interview was conducted during Marvel Television’s event for the summer 2016 Television Critics Association press tour at the Beverly Hilton Hotel.