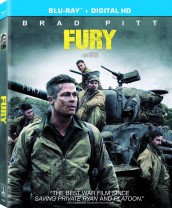 FURY Highlights this week in Blu-ray, DVD and VOD Releases 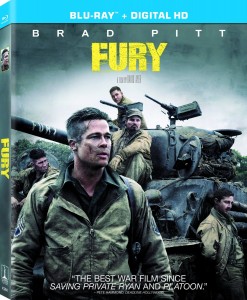 FURY – FURY is a very interesting war movie. It isn’t structured in a way at all familiar with other films of World War II in the modern era. FURY takes place during the latter point in the European theater where Germany has pulled back to its borders and the Allies are making a final push against the Nazis. But after Hitler declares Total War and conscripts women and children into the fight, the war changes as everyone is now a possible enemy of war. This put FURY in a unique light as well as we see kids fighting against tanks and dying horribly and not wanting to fight. FURY is a brutal movie. There are gory killings left and right and some crazy tank battles – as most of the film revolves Brad Pitt commanding a tank with a loyal bunch of soldiers he has fought with since D-Day. After one of the gunners in the tank is killed, they get a fresh-off-the-boat rookie soldier without any combat experience. Pitt’s character on one hand relishes in the fact he can torment the kid by making him kill a helpless Nazi but on the other hand sees the kid as a shadow of his former self. It reminds him of the person he was prior to three years of fighting in another country. Throughout FURY, Pitt’s character is conflicted against being a hardened commander that must keep his lose cannon soldiers on a leash while combating his own demons against killing children and watching friends die horribly. While it doesn’t match the comradery of a BAND OF BROTHERS or SAVING PRIVATE RYAN, the bonds are there (if driven by bloodlust) and the action sequences are fun and top notch. Definitely worth checking out if you enjoy war movies. 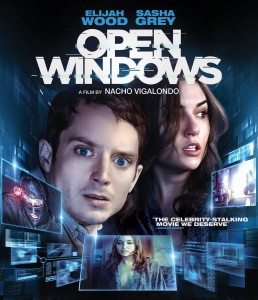 OPEN WINDOWS – Elijah Wood has taken some interesting career choices since THE LORD OF THE RINGS. Not bad ones either. His turn in MANIAC was something crazy good (of course it helped with how it was so different in shooting it from a POV the entire time) and in OPEN WINDOWS he plays a similar character of a controversial fan page for an actress (former porn star Sasha Grey) that posts images of her as well as gossip. When he gets an invite to have lunch with her as part of a publicity tour he graciously accepts. But soon while he’s watching some of the opening footage of the release of the movie on his laptop in his hotel, he gets a call on his laptop from someone saying they are part of her PR team and she cancelled the lunch. But he has a way to make it up to him and shows secret video cameras from her phone and elsewhere and seems to be able to hack into virtually anywhere to get him access to her personally. Soon, he realizes that something isn’t right and this guy has nefarious intentions toward him and the actress but before he can act to stop it, things escalate and he must follow the caller’s demands or risk either being arrested or have the actress who he adores killed. With some decent twists and a real look at celebrity stalking in a way not done before, OPEN WINDOWS is wildly entertaining and I would recommend it to anyone who enjoys a cyber-thriller. 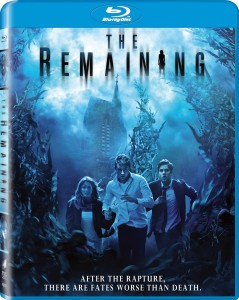 THE REMAINING – Yet another film that has to do with The Rapture. You know, when those that believe and are good and just are brought to heaven and the rest of us dirty scumbags are left wondering what we did wrong and having to fight the demons from hell that are unleashed on the Earth. THE REMAINING is like a serious THIS IS THE END, where a group of friends have to confront the fact that they are a bunch of a**holes that now have to fight off a slew of natural disasters, hellfire and boulder size hail as well as extreme amounts of gnarly demons from hell that at one point come flooding onto the Earth in the millions. Obviously, the difference here is that these people aren’t portrayed as terrible celebrities but ordinary people and they actually try to work in some semblance of a “message” in it regarding how we all have a choice in our lives even down to the way we die. It falls apart toward the end because the message gets a bit lost as everyone starts dying horribly and any choice sort of goes out the window (although the faith and believe choice is something that can happen) but overall THE REMAINING isn’t too shabby, has good production values and the acting is solid. While not a scary movie, still enjoyable for horror fans. 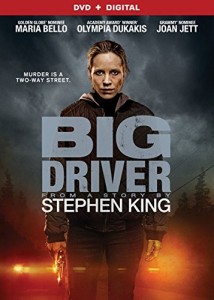 BIG DRIVER – Lifetime isn’t known for having many horror genre roots let alone showing some pretty gnarly deaths, killings and vivid rape scenes (or maybe I just haven’t been paying attention). But that’s what you get with BIG DRIVER. It amazes me that networks and the FCC care so much about foul language and nudity in programming yet brutal, evil rape scenes get by censors no problem. The rape scene in BIG DRIVER is so grotesque and awful it is hard to believe it ever aired. The film is based on a short story from Stephen King about a novel writer (a really good effort from Maria Bello) that spins tales about an elderly investigator that solves mysteries. She also happens to be batsh** crazy and frequently has conversations with her main character as well as her navigation system in her car. After she is left for dead, she claws her way back home and gathers her strength and vitriol and the back half of the movie turns into a I SPIT ON YOUR GRAVE type revenge thriller as she not only targets the man who tried to kill her (after raping her), but his mother, his brother and anyone else that stands in her way. I’ll say this … for Lifetime, not too shabby of a film but at the end it still is made-for-television so you can’t expect too much.