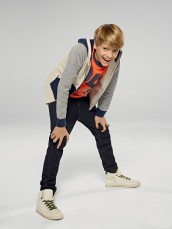 Nickelodeon’s HENRY DANGER is now in the second half of its first season Saturdays at 8 PM and already picked up for a second.

Norman, a native of New Mexico, is young but already a Nickelodeon veteran, with a previous guest role on the network’s THE THUNDERMANS and the lead in the upcoming telefilm SPLITTING ADAM. Over the phone, Norman talks about being in the DANGER business.

AX: What happens in the first season of HENRY DANGER?

JACE NORMAN: Well, in the first season, Henry’s trying to get used to becoming a superhero and balancing that sort of thing and hiding it from his friends and his girlfriend.

AX: Does Henry actually have superpowers?

AX: Does Captain Man have superpowers?

NORMAN: Yeah. He’s really strong and indestructible, no one can really hurt him.

AX: What does Henry do as Captain Man’s sidekick?

NORMAN: When [Captain Man] gets in a jam, Henry maybe distracts [the enemy] or protects him from whoever’s coming from behind.

AX: Do you do stunts as Henry – jumping, running, hitting people?

NORMAN: Yeah. We have a couple fight scenes throughout the first season, and I think I do a stunt every other episode, if not every episode.

AX: Was that something that you knew how to do before, or did they teach you how to do it for the show?

NORMAN: No, they actually have to teach you. I do a lot of training before I do [those scenes]. And if there’s a particular fight scene, we have to rehearse that whole scene before we even show it to the producers or anything like that. So it’s intense.

AX: Do you enjoy that?

AX: Do you play any sports that were helpful for you doing the stunts on HENRY DANGER?

NORMAN: I did a lot of soccer and lacrosse when I was a kid, so I think having that athleticism helps just in general.

AX: Do you have a favorite between soccer and lacrosse?

NORMAN: I think lacrosse, because it’s more physical, and at the time, a lot of my friends, the people where I live in San Diego, played it.

AX: Did you like the superhero genre before you got involved with it yourself?

NORMAN: Yeah. I was a big fan of the IRON MAN series and all the Marvel stuff.

AX: Is there a particular superhero character you’d like to play?

AX: It says in your biography that you’ve had a lot of pets. Do you still have a lot of animals?

NORMAN: No. I used to live kind of on a farm, where we had goats and a pig, but now, since we moved to San Diego, we couldn’t bring all those with us, obviously.

AX: Do you have any pets now?

AX: Do you want to have animals again when you get a bigger place?

AX: Do you have a favorite kind of music?

NORMAN: I would say that I just like every genre, but my main genre would probably be rap. I like the beat and I like the tempo.

AX: Do you think you might have any possibility of incorporating that into HENRY DANGER?

AX: Can you say if there will be big changes between the first and second seasons of HENRY DANGER?

NORMAN: I don’t know. We haven’t started shooting yet.

AX: You’ve also got a TV movie, SPLITTING ADAM, coming up for Nickelodeon. Did you shoot that during the hiatus between seasons?

NORMAN: No, I actually shot the movie between the pilot and doing the series when it got picked up.

NORMAN: It’s about this kid named Adam, who has multiple things going on, he’s got a jam-packed summer, and he has this huge crush on this girl named Laurie, played by Isabela Moner, who’s on a new Nickelodeon show called 100 THINGS TO DO BEFORE HIGH SCHOOL, and Adam ends up cloning himself and tries to use the clones to help do what he has to do during the summer. It’s called SPLITTING ADAM.

AX: How different are the clones from each other in SPLITTING ADAM?

NORMAN: There are five different ones. When we were originally beginning to shoot it, we wanted to make them very different. So there’s one guy who’s super into partying and is just a crazy guy, and there’s another one who’s very responsible and wants to get everything done. It was definitely fun to go outside of what I normally do, because they’re crazy.

AX: Are there any of the clones that are like Henry Danger?

NORMAN: I would say that Adam, the original, is the one who’s closest to Henry. They’re both trying to juggle a lot of stuff; they both have a lot going on in their lives.

AX: Is SPLITTING ADAM a pilot?

AX: Do you have a preference between doing a series where you’re playing a character for a long period of time, or a movie?

NORMAN: I don’t know. I kind of like being on a series, because you get to know your cast mates a little better, over a longer time period, but I don’t think acting-wise I like one more than the other.

AX: Where do you shoot HENRY DANGER?

NORMAN: We shoot it in Burbank, in Los Angeles.

AX: So are you commuting back and forth from San Diego, or do you stay in Burbank when you shoot?

NORMAN: I have an apartment in Burbank, but on hiatuses and on the weekend, I try to get back to San Diego.

AX: Are you looking forward to being able to drive?

NORMAN: Yes, absolutely. [laughs] I don’t think my mom is, but …

AX: Do you know what kind of car you want?

NORMAN: My dream car is probably a Tesla.

AX: And do you know what you’re doing once you’re done shooting Season 2 of HENRY DANGER?

NORMAN: No, I don’t. Hopefully, there’s a third season, but if not, I’ll do something else.

AX: And what would you most like people to know about the second half of Season 1 of HENRY DANGER?

NORMAN: Probably that it’s going to be a lot more funny, a lot more action, and an all-round great experience.