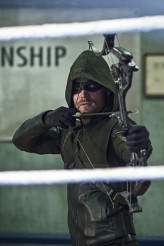 There is also discussion of CWSeed.com's animated VIXEN 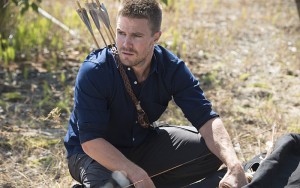 In Part 2 of our interview with ARROW and THE FLASH developer/executive producer/show runner Marc Guggenheim, he talks more about those series and CW Seed’s animated VIXEN.

AX: Are you involved with the animated VIXEN series for CWSeed.com?

MARC GUGGENHEIM: I am, actually, and it’s a great deal of fun, I have to say. I always love working in different mediums, and we’re going to do, basically, an animated spin-off [of ARROW and THE FLASH]. It’s going to center on Vixen, who I came to know as a former member of the Justice League. This is a six-part origin story, but characters from FLASH and ARROW are prominently involved, and it’s in the continuity and the world. There’s actually a question I’ve been getting on Twitter a lot – is Oliver [Stephen Amell] going to find out that Felicity [Emily Bett Rickards] kissed Barry [Grant Gustin]? That’s actually going to happen in the VIXEN cartoon. So part of the fun is that close cohesion. And Vixen’s such a great character, because first of all, she represents magic, which is an area that we haven’t explored on either of the two shows as yet.

One thing we’re always saying is, FLASH is very different from ARROW, ARROW is very different from FLASH. If ARROW is crime and FLASH is science, VIXEN has a big magic component. The other thing is, it’s a strong African-American hero who’s, like I said, a former Justice Leaguer. It’s set in Detroit as a nod toward the Justice League stories. It’s done with the same love of the source material that we bring to everything. Two of writers on the project, Keto Shimizu and Brian Ford Sullivan, are every bit as geeky as I am. So look for a lot of things hopefully you’ve come to know and love from FLASH and ARROW in VIXEN. The Easter eggs, the winks, the nods and the cool action – one of the things we can do in animation is really push the envelope in a way that we can’t on either of the two shows. So there’s a much larger production value we’re taking advantage of [in] the animated form. That’s the other reason to do it.

GUGGENHEIM: One of the things we say is, “Never say never.” And if the character resonates with people, that would be wonderful. I would love to be in a position where CW said to us, “Hey, we want a VIXEN live-action show.” We’ll have to see how things play out, but we really want to produce the highest-quality animated series. We want people to come to this who don’t normally watch an animated show. We want fans of THE FLASH and fans of ARROW to come to CWSeed.com.

AX: Does social media influence story and character choices you do on the series? For example, Felicity on ARROW has become much more important on ARROW and even THE FLASH, at the same time that she’s been embraced by the fans …

GUGGENHEIM: You know, when we started the ARROW journey, there was no Felicity. There was this IT [tech support] character. I always say, Andrew [Kreisberg], Greg [Berlanti] and I, in ARROW, we created a show where none of the characters talk the way we write. Oliver, Diggle [David Ramsey], Moira [Susanna Thompson], they’re all so quiet and taciturn. And we write these banter-y, fifty-mile-a-minute characters, and I think what happened to Felicity was, we got to Episode Three, we needed this character and we were just craving a character who we could write in our voice, and then we very fortunately cast Emily Bett Rickards and it was like, “Oh, my gosh, she’s terrific, let’s bring her back for Episode Four, let’s bring her back for Episode Five.” We just had so much fun writing the character. And then Stephen and Emily had this very natural chemistry that we just started writing towards. And it wasn’t like, “Hey, it’s our grand plan to get these two characters together.” There wasn’t even a grand plan to get Felicity to become a member of Team Arrow, it was literally, we’re having so much fun with this character and with this actress, to the point where the network was like, “You’re going to keep putting Felicity in the show, right?” And we’re like, “We’re three episodes ahead of you and she’s in the show.” And then of course, there are only so many times you can have her interact with Oliver without coming across like the biggest idiot in the world and she’s not an idiot, so bring her into Team Arrow.

It’s great that the fans on Twitter, to finally circle back around to your question, the fans on Twitter have embraced that relationship, but we sort of chart our own course. Look, there are a few moments coming up that all those people on my Twitter feed are not going to be happy about. Just straight up. And I’m going to have to stay off Twitter for a little while. But I will say that there’s a scene at the end of Episode Twelve – it’s Emily’s strongest performance on the show. It’s one of my all-time favorite scenes. We sort of give with both hands. The same people who wrote the scene between Oliver and Felicity in Episode Nine with the kiss on the forehead are the exact same people who wrote the scene with Felicity that ends Episode Twelve. So it’s a ride, it’s a roller-coaster.

Hopefully the show’s going to be on for a little longer.

GUGGENHEIM: I don’t know if this is blasphemy, but Green Arrow does not have a big rogues’ gallery, or a well-known supporting cast. The reason Oliver Queen in the various other media [than comics] keeps interacting with non-canonical characters is, his canon’s pretty small.

AX: Most of your villains so far are canonical, right?

GUGGENHEIM: Yes. But honestly, we tried a couple – Cyrus Vanch [David Anders] in Season 1 was brand-new. Lately, I have found myself sort of thinking towards [ARROW] Season 4 and thinking, we may have to start adding some characters to the toy chest, rather than taking away some characters from the toy chest. But that’s exciting to us, too.

AX: How much are you concerned with maintaining a tone versus making each season new? 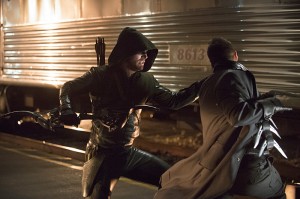 GUGGENHEIM: I think we have to be careful about making each season feel different. Certainly, the structure of [ARROW] Season 1 was, [Oliver] fought Malcolm [John Barrowman] and got his ass kicked, which is not dissimilar to the structure of Season 3, but the direction Season 3 takes, and this is not hyperbole – I know I’m prone to hyperbole, but no one is expecting where this is going. This show, I would say in Episode Fifteen, it takes such a hard left turn that no one is going to see it coming. It’s probably one of the biggest surprises we’ve ever done, probably because people are expecting a certain kind of story, and we have a different kind of story in mind.

I have faith in our fans, I have faith in our audience that they’ve got faith in us. And I know people are Tweeting, “We’re worried,” and it’s like, “Why are you worried?” Yes, the show is going to do something crazy and radical, but one thing we’re all always saying is, “It’s Season 3. We can’t repeat ourselves in Seasons 1 and 2. And we have to push the envelope.” And it’s a dangerous game. I have a lot of respect for shows that have jumped the shark, because jumping the shark is the result of – you need to push the envelope without tearing the envelope, and it’s very hard, because you don’t know where the line is. But you have to trust your gut and trust your instincts, and Greg, Andrew and I, we all trust each other’s instincts. It’s good that there’s not one of us in a room alone. We have each other as checks and balances.

AX: You were quoted as having said you’d like to see Batman on one of the shows …

GUGGENHEIM: Yes. That’s your quote. That’s your lead. [NOTE: Guggenheim is joking.] “Marc Guggenheim says he wants to sleep with Batman.” In a perfect world, sure, it would be wonderful [to have Batman interact with Oliver and/or Barry], but that’s just [not practical]. The one thing I always say is, I look at all these costumes – we never in a million years planned on doing this many costumed characters on the show, ever. By the end of Season 1, we didn’t expect to get Deathstroke, we didn’t expect to get the Huntress. We went and moved so much faster and farther than we ever had planned, that’s only doubled.

The great thing that FLASH has done and the crossover has done is, it’s introduced, in the most organic way, superpowers and the wondrous into the more grounded world of ARROW. We started off ARROW – we had zero plans for superpowers. When we said, “No superpowers,” we really meant it, but, “Wait a minute, we’re going to do FLASH.” Is anything off-limits? No. I think the question has changed. It’s now not, “What can we do?”, it’s “How can we do it in a way that honors that world that we have established?”

GUGGENHEIM: I think we started the season off with that dogmatic sort of division and I think we’ve all – Greg, Andrew and I – collectively softened on that. We always had a plan for this year in terms of the Atom, in terms of the world of Ra’s al Ghul. And again, it’s just feeling what feels right. I’m sure there’s a way to do GREEN LANTERN in the world that we’ve created on ARROW and FLASH. How and when and why that happens, part of it’s a creative thing and part of it’s what is D.C.’s plan and certain decisions get made way above our heads. We’re very happy with the characters we’ve got right now.

AX: Will we be seeing more of Ra’s al Ghul on ARROW?

GUGGENHEIM: You will see a lot more of him. Right now, we’re breaking Episode Nineteen, so we’re half a season ahead of you guys, and there’s a lot of Ra’s to come.

AX: One possible outcome of the arc that you’ve started on ARROW now is, by the time Oliver gets back, the people on Team Arrow may feel, “We’re fighting crime on our own, stop expecting us to be your support staff,” and Oliver is like, “I don’t know how to relate to you people as my equals” …

GUGGENHEIM: I would say there are huge chunks of that that are very much in line with what we’re doing, and then there are huge chunks of it that are [not]. We’ve got a slightly different plan, but there’s a reason why the [phrase] “Oliver’s crusade” is repeated in the beginning of every single episode, and there’s a reason why Oliver told Diggle in the premiere, “This is my crusade.” We go into each season with a plan. We know where we’re headed. It has a relationship to what you were talking about, ish.

AX: So far, flashbacks have been part of ARROW’s structure. Are you going to run out of back story, or is that going to be a feature forever?