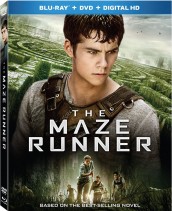 Also reviewed: THE MAZE RUNNER, THE DEVICE, THE DEVIL’S HAND and more

We all know that this time of year is the perfect time to spend time with family, take some time off, or sit around and watch people get butchered in a variety of ways in a variety of movies. Strangely as it sounds, there is a host of horror-related flicks this week in video just in time for some eggnog and good cheer!

Here’s what’s out this week: 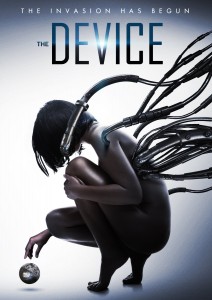 THE DEVICE – If you were gauging what type of movie THE DEVICE was from the box cover, you’d think it was some crazy science fiction movie with aliens running amok on the world and probing people left and right in a variety of orifices. Unfortunately, that sounds a lot better than what THE DEVICE actually is. Instead, the device in question is a strange black ball that a couple finds while vacationing at a middle-of-nowhere cabin. There is some intrigue as the sister of the woman in the couple happens to have had a really bad experience where she was kidnapped for a time and she blames it on aliens. Of course, she is also at the cabin and the tension starts rising as “the device” begins to give them nightmares and turning the husband completely bats**t crazy. So while it tries to convey some sort surprise happening in terms of aliens showing up, the film telegraphs that arrival over and over again so when the payoff comes, you are left flat. With virtually no scares, a very science-fiction premise that fits into the genre barely and a plotline that doesn’t deliver, I’d only check this out if you have nothing left to watch or are in desperate need of a horror flick on Netflix. 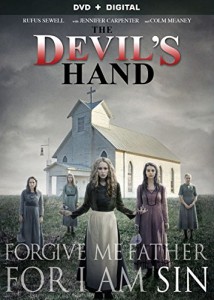 THE DEVIL’S HAND – It is sometimes hard to distinguish between all of the movies with the word “devil” in them because of the mass quantity of films dealing with the prince of darkness. Hell, even this column has two movies with devil in the title. It’s even harder when many of these films are extremely similar in scope. THE DEVIL’S HAND deals with a deeply devout community separated from the modern world and filled with dread over a prophecy about six girls being born on the six day of the sixth month. The prophecy states one of them will become The Devil’s Hand, a demon of incredible power that will bring horror to the world. And someone is making sure this doesn’t happen by killing the young women before they reach the age of 18. As the numbers dwindle, the community is convinced the prophecy is real and does whatever it can to make sure none of the girls reach maturity, much to the chagrin of the local police. This isn’t a bad movie and actually keeps your interest as there is a mix of supernatural along with a serial killer aspect. The production quality is actually very good as well and has some decent stars in it including Jennifer Carpenter and Colm EManey. However, there is nothing new here and the scares are limited at best. Still, not a bad effort if you are in the mood for horror. 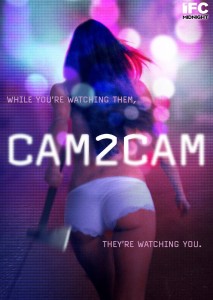 CAM 2 CAM – Given this is a tale about being stalked on a Webcam and a sexy photo on the cover you’d expect this horror flick to have ample amounts of sexiness and nudity while a bunch of hot chicks get carved up or terrorized. Nope. Big fat nope. Sure there are some hot chicks but there is not any sexy and the nudity is modest at best. Not that this would be a deal breaker if CAM 2 CAM was any good in terms of storyline but it isn’t so you have to go to the bottom line in that case. Based in Hong Kong, we are introduced to a chick that is trying to see another gal naked via Webcam. On paper, this is a great start to a film. But quickly you realize the person on the other end isn’t on camera and it takes literally another 10 minutes for the chick to figure it out. Skip forward and her sister is looking to find out what happened to her and she gets involved in the exact thing her sister did luckily with better results. There is a twist ending here but by the time it comes you are already checked out on what you are seeing so the impact gets drown out, if there was any to begin with. Much like THE DEVICE, only invest time here if you have nothing better to watch. 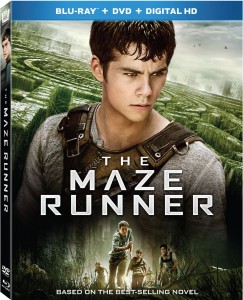 THE MAZE RUNNER – It’s hard to know what you are going to get with all of these young adult novels being turned into movies these days. Sometimes you get a TWILIGHT. Sometimes you get a THE HUNGER GAMES. Sometimes you get THE MAZE RUNNER that lands square in the middle. MAZE lacks the star power of a HUNGER GAMES but doesn’t suck like TWILIGHT. In fact, the plot is actually pretty intriguing about a group of kids that awaken to no memories in a walled off arena type structure that constantly changes and inside are gnarly beasts whose only purpose is to kill anything that enters the maze. The teens have no reason as to why they are there but they know the only means of escape is to traverse the maze and find a way out. That means sending unlucky “runners” to figure out how the whole thing works and try not to die. When a mysterious teen shows up with a lot of knowledge and curiosity about their circumstances, he sets in motion a way for the group to get out but he holds a secret of his own that may be his undoing. So there is a good amount going on for a YA flick and the mystery of the maze keeps things interesting long enough that it is enjoyable. They also leave it open ended so there may be sequels in the future.