Doctor Who review Series 8 Into the Dalek 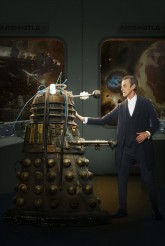 ©2014 BBC/BBC Worldwide/Ray Burmiston
Peter Capaldi as The Doctor vs. the Dalek in DOCTOR WHO - Series 8
Reviews 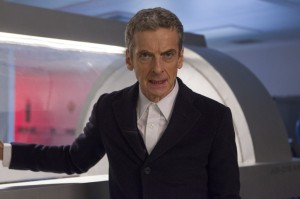 The first episode of DOCTOR WHO where a new regeneration of The Doctor is introduced is always a bit of a dicey phase. The Doctor is never really who is he is going to be with his new face, and you kind of have to get around all of the more unstable parts of his personality post regeneration. The second episode following a regeneration is typically where we really get to see the new Doctor at work, and get a feel for who he is, and how he is going to operate.

“Into the Dalek” is the second episode of the new tenure featuring the 12th Doctor (Peter Capaldi). Writers Steven Moffat and Phil Ford decided to bring in everyone’s favorite villains, the Daleks; in order to really break in the new version of the Timelord and to show exactly how he is going to handle his old foes with his new persona.

This is a really different episode for WHO. Not only is The Doctor not actively fighting an army of Daleks, or even one very dangerous Dalek, he is stuck inside of the Dalek itself for much of the fighting that takes place in the episode.  “Into the Dalek” is one part DIE HARD, and one part THE INCREDIBLE JOURNEY.  The Doctor gets roped (or bullied) into being shrunk and put inside of a defective Dalek that has turned good. The purpose of this invasive surgery is to find out why the Dalek has suddenly turned good, and to find out what is wrong with it internally. Clara (Jenna Coleman) of course gets drug along for the action and the two are escorted inside by a trio of heavily armed soldiers.

The idea of spending the majority of the episode inside of a Dalek armor casing is a really unique new approach to the idea of fighting what many believe to be The Doctor’s number one enemies. Audiences really get a new look at what makes up a Dalek, the organic components and the mechanical, and introduces things like tiny robotic Dalek antibodies that kill anything that threatens the internal well being of the squid-like creature at its center.

As much as this episode is about the Dalek itself, this is really only a means for the new Doctor to examine himself and try to answer the question, “Am I a good man?” This Doctor is certainly brusquer than previous versions we’ve had on the modern series, but he also has moments of playfulness. So it seems he is still getting his sea legs so to speak with his own personality changes.

Personally I like the fact that The Doctor is no bullsh** these days. Gone are the crazy pitch inflections and madly waving hands of Matt Smith’s 11th Doctor, and Capaldi’s Doctor just seems very matter-of-fact in the way he talks to others about life and death.

Ultimately, the better side of The Doctor’s nature wins out (with some helpful suggesting from Clara), and he decides to try to rehabilitate the Dalek so it can continue to be “good”. This doesn’t quite work out the way he hopes, but this is a Dalek we are dealing with here folks. What did you expect? 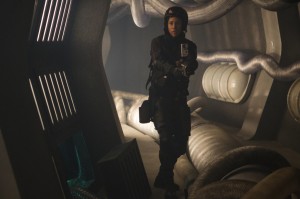 I did enjoy this episode, and I continue to really love the new Doctor. I like how he deals with situations, and his temperament and delivery are a nice change from other recent Doctors before him. The Daleks were used, but as a means to an end, and they didn’t really feel like the main problem in the story. Eagle eyed fans keep a close eye on the “memories” that Rusty the Dalek has like the destruction of the Valiant flying ship from “The Stolen Earth.”

My only real bone of contention with this episode is the need to introduce a love interest for Clara. Samuel Anderson plays Danny Pink, a former soldier who is now a teacher at Clara’s school, and she goes after him like he’s made out of ham. This brings up the question many have asked, “Does romance have a place in DOCTOR WHO?” In the classic series romance was not often an element of the storytelling, but in the new show post 2005, it has been a constant element. It bothers me that the writers felt the need to introduce a love interest for Clara now that The Doctor and she aren’t flirting any longer. (And more importantly why should we care?) If Jenna Coleman is leaving the series as rumors suggest, is this there way of giving her a happy ending? 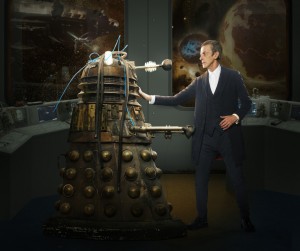 Peter Capaldi as The Doctor vs. the Dalek in DOCTOR WHO - Series 8 | ©2014 BBC/BBC Worldwide/Ray Burmiston

Next week Robin Hood and “Robot of Sherwood”. Looks fun!

Oh yeah and just who is Missy (Michelle Gomez)?