The actress talks about playing a brothel proprietor 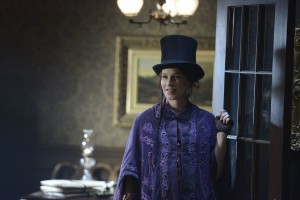 COPPER, the first scripted series made specifically for BBC America, is now in its second season, Sunday nights at 10 PM. The series is set in New York’s dangerous Five Points neighborhood in the mid-1860s, while the Civil War still rages. Union Army veteran and Irish immigrant Kevin “Corky” Corcoran (Tom Weston-Jones) is now a member of the local police force, trying to keep order. Prussian immigrant Eva Heissen, played by Franka Potente, is a businesswoman who runs a brothel and is sometimes Corky’s lover, though lately she’s been dealing with the new power in town, Donal Logue’s character Brendan Donovan.

Potente rose to international fame as the star of the feature RUN, LOLA, RUN, which was made in her native Germany. She is probably best known to U.S. moviegoers for starring alongside Matt Damon in THE BOURNE IDENTITY (and in the early sequences of THE BOURNE SUPREMACY) and has had prominent guest-star roles on a number of U.S. TV series. COPPER, however, is Potente’s first series regular gig.

AX: Was guesting on those shows like sticking your toe into the waters of series TV to see if you liked it?

POTENTE: I was a huge fan of THE SHIELD and begged Shawn Ryan to be on the last season, when I heard that it was ending, and he made it happen, so that was extraordinary for me. It was almost like Christmas, because I was a fan. HOUSE was similar. But inAmerica, TV series are such high quality, so I wasn’t afraid to try it.

AX: In RUN, LOLA, RUN and the BOURNE movies, you have a lot of running/jumping/punching people. Does Eva get to do those sorts of things?

POTENTE: Not comparable in a contemporary sense to LOLA or BOURNE, no, but it’s a very vital, physical part.

AX: Is there a difference between playing a person who’s in charge of a bunch of people, as Eva is within the bordello, and some of your other characters, who are loners or at least not telling other people what to do?

POTENTE: Well, I think it’s not only the actors, it’s also the people in the small roles, like the extras, because they’re also potentially my clients. Anyone under Eva’s roof is part of her community in a sense. So, yeah, you have to keep it in mind, you want to incorporate it into your acting. And it’s the sense of responsibility, which adds – in a nice way, I think – an adult aspect to the part. I mean, she’s more than just an employer. I think when you’re a pimp, basically, she’s there to look out for the girls; if someone is pregnant or whatever, she’s like a mom, in a sense, a mother figure. She has to be strict, she’s going to be sweet, she’s all of these things. In times that were tough, especially. All these women probably had families [locally], but they also had to provide for people somewhere else, and Eva knows all that, I think. She knows a lot of stories.

AX: Is there a particular toughness to Eva?

POTENTE: Definitely – I think you have to have that, living in that neighborhood and that time as a woman. I think there are a lot of aspects to Eva that are very male, which have to do probably [with] so many men for all these years have come through her bed, men that are drunk, men that share secrets, fears and stories and deep things, so I think she’s just very smart in using it in her favor.

AX: Did you do any research into the period else to help you with playing Eva?

POTENTE: Yeah, of course, but to be honest with you, most of it you can’t really use. What you can use is, you have to translate that into what does that mean. Historic dates and numbers and events are one thing, but what does that mean? How does that trickle down to a person like Eva? Eva didn’t have news or Internet. How much would she even know? She circled so much around herself to survive, I don’t know how much that battlefield out there, the soldiers, the numbers, how much does that possibly mean to you when you have to fight for survival? So it only matters a little bit, honestly – for my character, not that much, I feel.

POTENTE: I love [television], because film can be so slow sometimes. I’ve waited hours for lighting – I’ve been in my trailer for eight hours and wasn’t used. This [COPPER] is quite elaborate, so we do wait sometimes, but not a ton, because our sets are either pre-lit or they know them so well, so I like the pace. And it doesn’t feel rushed. They have approximately eight days per episode, which is okay. Once you get into the [swing] of things – I mean, I can put on a corset, hoop and all these layers in ten minutes, tops. At the beginning, it’s twenty, but you get used to it.

AX: You also were in several episodes of AMERICAN HORROR STORY: ASYLUM …

POTENTE: For me, it’s actually fabulous, because we watched the first season and loved it. Because I’m so [busy with] the run of COPPER, I can’t do lots of crazy stuff, but I’m delighted to be part of that one.

AX: Can you contrast the two show-making styles at all?

POTENTE:At the end of the day, this is my experience of working almost seventeen years in movies across both sides of theAtlantic. A movie is a movie is a movie, or TV is TV is TV. You have a camera, you have actors, you have lines – there’s not that much of a difference. It’s a choice how much emphasis or importance you pay to certain details, but the core is the same. I’m not doing anything different if I act in a movie or a TV show, in German or English. The core is always the same.