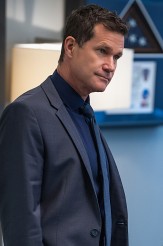 Exclusive Interview: Dylan Walsh on the return of UNFORGETTABLE

The actor talks the resurrection of the CBS series 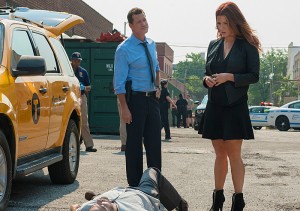 Theoretically, the CBS series UNFORGETTABLE is a procedural about Carrie Wells (Poppy Montgomery), who has the gift of eidetic memory, meaning that she has almost total recall of everything she sees and hears. UNFORGETTABLE is not supposed to be about resurrection, but after canceling the show after its initial 2011-2012 run, CBS decided to make a second season after all. UNFORGETTABLE currently airs Sundays at 9 PM.

In UNFORGETTABLE, Carrie is a former NYPD detective who is prompted to rejoin the force by her former colleague and lover, Detective Al Burns, played by Dylan Walsh. In the first season, they’re working in Queens; Season 2 finds them investigating crimes in Manhattan.

Walsh, a native of Los Angeles, spent seven years starring in NIP/TUCK as plastic surgeon Dr. Sean McNamara. He also played a New York police officer in a season of BROOKLYN SOUTH and a New York-based FBI agent in a recurring role on CASTLE. Film roles include CONGO, SECRETARIAT and the remake of THE STEPFATHER.

At a party thrown by CBS for the Television Critics Association, Walsh talks about the return of UNFORGETTABLE.

AX: Did you ever think the show was dead, or did you think …

AX: What attracted you to UNFORGETTABLE in the beginning?

WALSH: After seven years on NIP/TUCK, I was looking for something in law enforcement, and this was perfect [laughs]. No, I like playing. First of all, I loved the script, but I like the world that he inhabits, and I like what he has to deal with in her [Carrie]. He has to answer to something higher, and she’s a little reckless, and they have this past. What I love about it is, it’s a great procedural, but I think it’s more than that. I love the hook, but it’s more than that because it looks into the people, I think, more than your average procedural.

AX: How is the show changing for Season 2?

AX: How did you feel about Season 1 overall?

WALSH: Well, I think we were trying to find the show, and it’s going to change again. One of the great things about picking the show up as a summer show is, it gives them a chance to revamp it. It’s less of a situation where I’m her boss, always sort of slapping her wrist and telling her not to do things. They’re bringing it back with a little more action and a little more edge.

WALSH: The truth was, we were using every borough to beQueens. Now we’ll probably use every borough to beManhattan[laughs]. The idea was to make the stakes higher, make it a little slicker. There was something aboutQueensthat was almost kind of provincial, which is funny to think. But it’s true. If you hang out inQueensfor awhile, it’s a slower, almost suburban city feel and I think they want to pump it up.

AX: Do you feel that UNFORGETTABLE got a better handle on depicting how Carrie’s eidetic memory worked as it went along?

WALSH: I think the question always was, how much [should it be depicted]? I mean, is it a show all about that, is that something that just gets folded in? I think the show has to have a life aside from the memory. I think we started to find that balance toward the end [of Season 1].

AX: Anything else you’d like to say about UNFORGETTABLE at this time?

WALSH: No. I’m excited, because we’re [bringing] it back better. This is a great opportunity to take what was good and then finesse it the way we want to.