Home » EMPIRE STRIKES BACK, THE EXORCIST and AIRPLANE! get preserved by Library of Congress 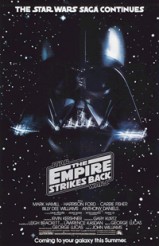 EMPIRE STRIKES BACK, THE EXORCIST and AIRPLANE! get preserved by Library of Congress

Spanning the period between 1891-1996, the National Film Registry of the Library of Congress designated 25 new films to their film preservation catalog which includes the second STAR WARS film THE EMPIRE STRIKES BACK, the comedy AIRPLANE! and the horror film classic THE EXORCIST.

It was a very eclectic list that also included Spike Lee’s 1992 bio-pic MALCOLM X and the Robert Altman classic McCABE AND MRS. MILLER.

Not everything was obvious. Included in the mix were some shorts including the George Lucas directed ELECTRONIC LABYRINTH which was the precursor to his feature film THX-1138 and a two-minute 1913 short called PRESERVATION OF THE SIGN LANGUAGE.

“As the nation’s repository of American creativity, the Library of Congress—with the support of the U.S. Congress—must ensure the preservation of America’s film patrimony,” said Librarian of Congress James H. Billington in a press release today. “The National Film Registry is a reminder to the nation that the preservation of our cinematic creativity must be a priority because about half of the films produced before 1950 and as much as 90 percent of those made before 1920 have been lost to future generations.”

This year’s list brings the full total of films selected to 550.

Tags: A Tree Grows in Brooklyn, A Trip Down Market Street, Airplane, All the President’s Men, Cry of Jazz, Electronic Labyrinth: THX 1138 4EB, Grey Gardens, I Am Joaquin, It's a Gift, Let There Be Light, Library of Congress, Lonesome, Make Way For Tomorrow, Malcolm X, Mccabe and Mrs. Miller, National Film Registry, Newark Athlete, Our Lady of the Sphere, Preservation of the Sign Language, Saturday Night Fever, Star Wars, Study of a River, Tarantella, The Bargain, The Empire Strikes Back, The Exorcist, The Front Page, The Pink Panther