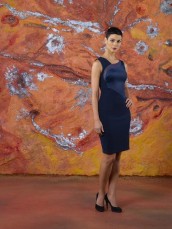 In ABC’s reboot of V, the alien Visitors trying to take over Earth are led by Anna (played by Morena Baccarin), who is a pretty cold customer even by extraterrestrial reptile standards. She mates with humans and then eats them, skins alive subordinates who displease her and even beats up her own daughter Lisa for disobedience.

This season, we’ll see that Anna also has been dishing out rough treatment to her mother (portrayed by Jane Badler, who was the primary alien villainess in the original ’80s incarnation of V).

Thanks to the fact that Anna is played by Baccarin (pronounced BACK-a-rin), she looks fabulous while behaving heinously. We caught up briefly with Baccarin to talk about where V has been and where it’s going when Season Two debuts January 4 on ABC. 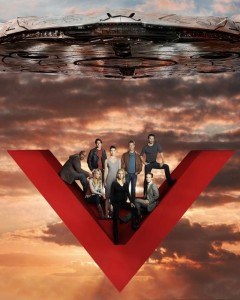 ASSIGNMENT X: Last season, it was perceived that either V or FLASHFORWARD would be renewed for a second season by ABC, but not both. Was that a situation that had you sort of biting your nails?

MORENA BACCARIN: I have to say we were pretty confident. It didn’t have to be one or the other, but we were confident the show was doing well.

AX: What do you feel the series’ strengths became as the first season went along – do you think it got stronger in any areas?

BACCARIN: I feel like we really hit our stride somewhere halfway through and the final three episodes I think were really what the show is about, and we all feel really happy with it.

AX: Going into the new season, are we seeing more all-out war, or is it continuing to be the espionage seduction/threat dynamic of first season?

BACCARIN: I’m not sure. I know that we’re going to continue to have somewhat of a war, but I don’t think it’s going to go full on, because otherwise the show’s over. But you’re going to see what the red sky is and where several characters of the show are going.

AX:We’ve seen that Anna sprouts fangs when she mates. How did you enjoy working with those?

BACCARIN: That was really fun. That’s a fun thing to do at work [laughs]. Well, I didn’t have to have any makeup on for that. It was all CGI, it was a special effect.

AX: The VFX people just said, “Open your mouth wide and we’ll do the rest”?

BACCARIN: Exactly. It was easy as far as I was concerned. I didn’t have to do the hard work.

AX: Do you feel any kind of ownership of the mothership set there – when you walk onto it, do you have a feeling of, “This is mine”?

BACCARIN: [laughs] I don’t have a set, so no. It’s all green screen, so it’s just a big green room. I love working there – it feels like home.

AX: How do you feel about the mother/daughter relationships in Anna’s life? I mean, is that normal for Vs, or is she notably cold even if you’re an extraterrestrial reptile?

BACCARIN: I think that’s the V way of life. It’ll be really interesting to see the dynamics between Lisa and Elizabeth Mitchell’s character, and Anna and Lisa, and Anna and her mother, to be able to see how the [different] mothers operate.

AX: Anything else you’d like to say about V or your career overall?

BACCARIN: Just that I’m very happy to be where I am.