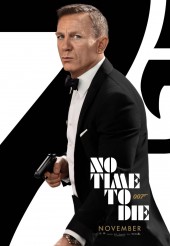 Movie Review: NO TIME TO DIE 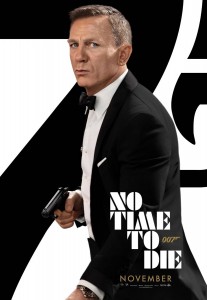 NO TIME TO DIE feels familiar, in a very welcome way. It has the spectacle and film craft we associate with the James Bond franchise, as well as a top cast who hit all the right notes. There’s a kind of timelessness about the way it’s all put together. It is, if you will, a very movie-ish movie that pairs well with a big screen and theatrical sound system.

What NO TIME TO DIE also has is a third act that takes on a whole other genre, where no other James Bond film has gone before. It remains very much a 007 film throughout, but it also becomes something else. In getting there, the movie has to recalibrate itself a bit. Star Daniel Craig as Bond handles these beats with becoming grace and heart. Still, there are elements of this new aspect that may be a little overly reminiscent of non-Bond films past.

While not absolutely necessary, it helps to watch (or even rewatch) 2015’s SPECTRE, NO TIME TO DIE’s immediate predecessor, as the two films together form one long story. For those not caught up, SPECTRE (named for the evil organization bent on world domination) ended with Spectre leader (and Bond’s former foster brother!) Ernst Stavro Blofeld (Christophe Waltz) safely locked away. Bond, meanwhile, appeared to be leaving behind his license to kill in favor of pursuing a license to live in peace with new love Marianne Swann (Lea Seydoux), the estranged daughter of a now-deceased Spectre assassin.

The new film starts with Bond and Swann on a happy holiday, which doesn’t last long, though not for the reasons we might assume. Director Cary Joji Fukunaga, who wrote the screenplay with Neal Purvis & Robert Wade and Phoebe Waller-Bridge, gets us revved up with a vehicle stunt sequence that delivers everything we could want: speed, stunts, sonics, and scenery. It’s a bravura piece of action filmmaking.

The new global menace (there’s always one of those) is ever so slightly sci-fi, but only just. Wisely, the screenwriters don’t rely on the notion that power-hungry maniacs can be deterred by the threat of scandal (a premise that worked fine for SPECTRE in 2015, but which seems less likely nowadays). There’s also some personal menace, which works mainly because the filmmakers and the cast have both the sense and sensitivity not to push it too hard.

Despite the need to fold certain characters, plot points and exposition into the running time, NO TIME TO DIE has an agreeably brisk pace. It’s not camp, but when there are jokes, they land well. The film also finds space for grace moments for the regular supporting cast – Jeffrey Wright, Ben Whishaw, Naomie Harris, Rory Kinnear and Ralph Fiennes – as well as the capable new 00 agent played by Lashana Lynch. Rami Malek fits right in with the overall vibe.

NO TIME TO DIE is fine when it’s strictly a Bond film, and acquits itself decently when it stretches into being something else. It’s sometimes thrilling, but even when it isn’t, it satisfies.