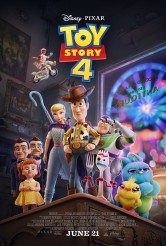 Fun, but not extraordinary 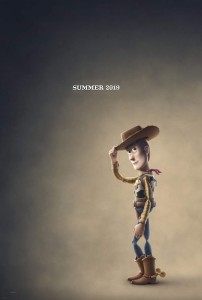 It’s not fair to judge most movies by the lofty standards of 2010’s TOY STORY 3, which was wildly entertaining, yet so emotionally potent that grown-ups were sobbing in their seats. Reportedly, some of the end sequences of that movie were added to cheer people up before they exited the theater. However, when the movie in question is TOY STORY 4, comparisons are hard to avoid.

The 1995 TOY STORY was an instant classic, and its 1999 follow-up TOY STORY 2 slotted easily into place. Although initially the films hadn’t been intended as a franchise, TOY STORY 3 felt like the perfect wrap-up: hilarious, affecting, inventive and with a wonderful way of sending everyone into the sunset.

Here’s the thing about adding a fourth movie to what wound up as a trilogy, planned or not – it’s like trying to square a triangle. What seemed like exactly the shape it should be has to move elements that don’t always fit just right, or improve on what came earlier.

In real-world terms, it’s been nine years since TOY STORY 3, in which toy leader Woody the Cowboy (voiced by Tom Hanks) finally said goodbye to his now-teenaged boy Andy and accepted that he and his pals were now going to be there for little Bonnie instead. In TOY STORY 4 terms, it obviously hasn’t been that long, since Bonnie (now voiced by Madeleine McGraw) is just starting kindergarten. Woody isn’t played with as much as he used to be, since Bonnie likes to have Cowgirl Jessie (Joan Cusack) play sheriff these days. Still, Woody is concerned by Bonnie’s fear of going to school, so he sneaks into her backpack, and makes sure she has arts and crafts supplies in class.

The unintended result of this is Forky (voiced by Tony Hale), a spork that Bonnie has decorated into toyhood. Bonnie cherishes this plaything that she has made. Forky, however, is sure he is trash, not a toy. Woody has to convince Forky to take his responsibilities to Bonnie seriously and stop running off to the garbage can.

This is lightly amusing, but it waffles somewhat. Forky’s insistence that “I’m trash” doesn’t seem to be a self-esteem issue, but rather an identity issue. It’s not that he doesn’t think he’s good enough to be a toy, it’s that he actually sees the trash as a comforting, safe place to be. While we’re all for Forky being a toy (for one thing, he’ll last longer), this goes on awhile. It’s spelled out that we’re meant to understand this is all about Woody’s investment in Forky as being the Number One Toy that Woody no longer can be. This would work better as a parent/child metaphor if it didn’t blithely ignore Forky’s feelings and instincts in the matter. On the other hand, it’s not hit so hard that this matters much – but then again, if this doesn’t matter much, what should? 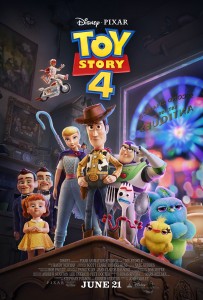 TOY STORY 4 takes a turn partway through, when Woody unexpectedly encounters his old friend Bo Peep (voiced by Annie Potts). At this point, we meet a lot of great new characters, chief among them those voiced by Keanu Reeves, Keegan-Michael Key and Jordan Peele. Reeves sends up his live-action image peerlessly. Key and Peele can (and it’s entirely possibly they may) get their own spin-off. They all provide laugh-out-loud highlights. The writing and animation for them deserve applause as well.

There are also some new sets of lessons. In the case of the tea party doll Gabby Gabby (voiced by Christina Hendricks), these are set up fairly in terms of what we’re meant to take from them directly. Again, we’re on shakier ground with how we get there. Then there’s Woody’s personal journey. It works broadly as an allegory, but it doesn’t feel like a natural outgrowth of what’s come before. It feels more like the filmmakers looked at all the pieces they had and tried to rearrange them in a way that is new but not an enhancement. It’s hardly going to ruin anybody’s experience of the previous TOY STORY films, but it doesn’t provide much sense of completion, either.

TOY STORY 4 is fun and (does this even need saying of a Pixar film?) exceptionally well-made. If it doesn’t live up to the towering effect of its predecessors, neither do most other movies.