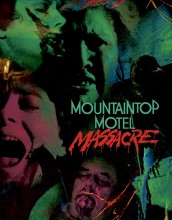 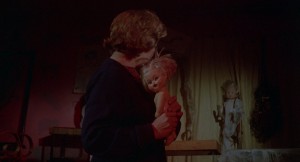 While not as well known as most slasher movies from the 1980s, MOUNTAINTOP MOTEL MASSACRE is a curious relic from the era that has actually aged quite gracefully.

Directed by Jim McCullough Sr. and written by Jim McCullough Jr. , the film mixes PSYCHO with standard slasher fare for an occasionally spooky and atmospheric ride accompanied by a creepy score by Rob Dilulio.

The film begins with the introduction of Mountaintop Motel proprietor Evelyn (Anna Chappell), having been recently released from a mental institution, she goes crazy and kills her daughter Lorie (Jill King) because she was engaging in devil worshipping activities.

Strangely, the authorities don’t target her 100 percent as the culprit, which obviously should have, and this incident makes Evelyn snap. As a variety of guests check into her mountaintop motel on a super rainy night, she creates havoc for them. With access to their rooms (via an underground tunnel and trap doors), she leaves poisonous snakes, cockroaches and rats for her patrons to find in the middle of the night crawling over them. Then things get worse when she decides this isn’t enough, grabs her sickle and begins to kill them one by one (hence the “Massacre” of the title). 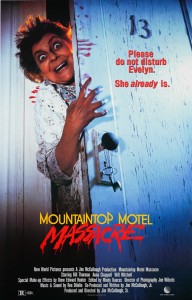 One of the pleasant surprises in the film is multiple characters recognize there’s a problem at the hotel and don’t accept that everything is alright. The inclination by these characters is to leave or confront the terror which they realize is probably Evelyn.

While the atmosphere works for the film, the story itself does come to a standstill at times – especially when she’s planting dangerous creatures in the hotel rooms. Character development is kept to a minimum and Evelyn could have used a little more depth by going into her fractured psyche more, but it’s not enough to ruin the film’s tweaking of slasher conventions.

For a film like this, these are small complaints especially when it has some great gore gags and McCullough’s approach to the genre is refreshingly different and strange. 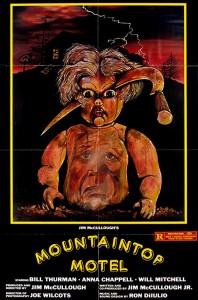 This Vinegar Syndrome release features a pristine looking 2K transfer restored from original 35mm negatives, while the special features go into the history of the film with interviews from assistant cameraman David Akin and production designer Drew Edward Hunter. 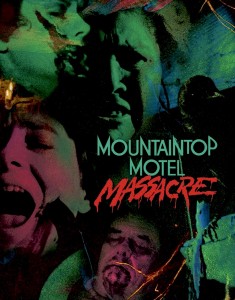 It wasn’t until 1986 when New World Pictures acquired the film and requested the filmmakers return for a two-day shoot to lens a new, bloodier ending and re-christened it MOUNTAINTOP MOTEL MASSACRE.

It would have been cool if the original ending was unearthed for the Blu-ray release, but that aside, there’s plenty here to dive into including the original trailer, a stills gallery, and a pretty cool articles gallery on the press the movie received.

With all Vinegar Syndrome releases, a sturdy  embossed slip cover (limited to 2,000 copies) is included and the movie is Region-Free (which will make some fans happy).

Another win from Vinegar Syndrome which has been on fire all year with their eclectic group of vintage horror and exploitation releases.