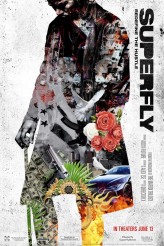 One more one last score 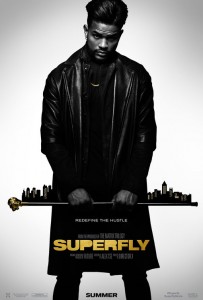 One thing the new SUPERFLY has going for it is conviction. Not only does everyone involved seem unconcerned that they’re in a remake of the 1972 exploitation flick SUPER FLY, they proceed as though this is the first story ever told about a criminal who wants out of the life as soon as he’s made one last big score. This bravado – or shamelessness, or chutzpah, or whatever you want to call it – goes a long way toward making the new SUPERFLY fairly entertaining.

Youngblood Priest (Trevor Jackson) is a cocaine dealer in Atlanta who has managed to stay off the radar of law enforcement, despite his notable success. However, when Juju (Kaalan Walker), a resentful lieutenant from another group, picks a fight, things get bad in a hurry. Priest figures it’s time to get himself and his two ladies (Lex Scott Davis, Andrea Londo) out of town. He just doesn’t want to rush it and attract unwanted attention. Alas …

Never having seen the original SUPER FLY – the first film’s title is two words, “super fly” meaning “extremely timely and wonderful” – this reviewer cannot make comparisons, beyond the fact that some of the fine Curtis Mayfield tracks, including the title song, are used again here. The new SUPERFLY in a number of ways feels like it might have been made in the ‘70s, with Alex Tse’s screenplay having the kind of plot logic (and lack thereof) that was more common back in the day. While acknowledging that drug dealers tend to be violent, with Priest as the outlier who uses it as a last resort, there’s no apology for our hero’s trade. This would seem a little less weird if SUPERFLY wasn’t concerned with some real-world issues, especially police violence against unarmed black people. This being the case, it seems like the issue of addiction and how drugs affect the community might at least be mentioned. Then again, SUPERFLY is presented largely as a high-end, non-supernatural fantasy, so maybe all of Priest’s customers consume responsibly. 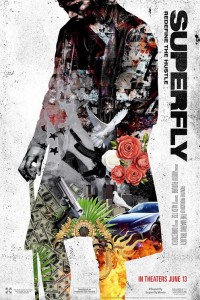 Another fantasy element is that, until it becomes necessary for the plot, no one in Priest’s world, including the mansion-dwelling, all-white-wearing Snow Patrol gang, seems to be having issues with either police or the Feds. Priest may not go in for gunplay, but no one in his circle is exactly low-key in terms of clothing or automobiles.

Then again, all of this serves the purpose of a glittery, splashy visual style. Director X. (that’s his professional name, no relation to Assignment X) keeps the pace energetic and finds ways of maintaining momentum throughout, like having a conversation that’s mainly exposition play out while the two characters are engaging in a bout of jujitsu. Sometimes it’s not entirely clear what Director X. is going for, as in a shower sex scene where the physical mechanics are more likely to arouse laughter than desire, but his methods are mostly in keeping with the genre. Alex Tse’s screenplay, based on the 1972 script by Phillip Fenty, has some good intentional humor and a pretty reliable sense of moral relativism.

Jackson is an engaging lead, and Jason Mitchell has spark and charm as Priest’s best friend. Michael Kenneth Williams does typically excellent work as Priest’s mentor, and Jennifer Morrison (Emma on TV’s ONCE UPON A TIME) gives a sturdy performance as a corrupt cop.

SUPERFLY harks back to the ‘70s, when there just weren’t as many movies, and filmmakers had less to avoid in terms of copying ideas, scenes and styles. What this film lacks in originality, it makes up for in zest.