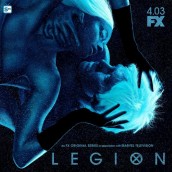 The actor talks playing a young woman with superpowers 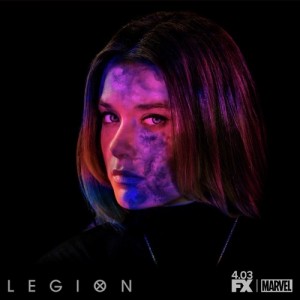 In FX Networks’s LEGION, which has its second-season finale on Tuesday, June 12, Dan Stevens stars as David Haller. David grew up thinking he was schizophrenic, but it turns out that he has superpowers, and the voices in his head belonged to the power-hungry Amahl Farouk, a body-jumping parasite who has a grudge against David’s birth father, Charles Xavier, aka Professor X of Marvel’s X- Men.

David is in love with Syd Barrett, another powered person played by Rachel Keller. Syd’s issue is that if she touches someone, they have a tendency to swap bodies. This can alternately come in very handy or be mightily inconvenient.

The Minnesota-born Keller is a stage actress who made her TV debut in a co-starring role in Season 2 of FX’s FARGO, which, like LEGION, was developed for television by Noah Hawley.

ASSIGNMENT X: LEGION is not quite like any other shows, including other Marvel shows, but broadly speaking, is this the kind of material that you enjoy playing? For that matter, are you enjoying working in television, as opposed to on stage?

RACHEL KELLER: Yeah. I come from a theatre background. My dad was an actor, and I went to plays more than I watched [films and television]. So I felt like stumbling into this world and into Noah’s work was just so fortunately aligned. It’s quite different from FARGO. The experience of making it requires a different kind of arrival as an actor. But this world, this landscape, is particularly playful, and takes a kind of surrendering and allowing and present-ness that I am incredibly engaged with. It’s challenging to be in a new medium. I’m learning as I go, and make plenty of mistakes. I feel really supported by a crew, and a design team, and actors that care a lot. Does it always work out the exact way we want? No. But it’s an experiment, as Noah was saying, and I find that we’re not just doing a Marvel show, we’re not just doing a straight drama. We’re making a surrealist piece, and that is a total treat.

AX: We know that Syd swaps bodies if she touches someone in an emotionally fraught state, and she generally avoids touching other people altogether. Does Syd have a medium state where she can touch people and just be uncomfortable, or does she actually transpose every time she touches them?

KELLER: That’s an interesting question. Because we begin [Season 2] a year later, what I was really curious about was the maturation process of someone with this ability, and not [just anyone], but a young woman, with these hormones and sense of her own body. Noah and I have talked about how that might progress, how if she’s close to someone, does she lose all of herself, or is she able to maintain parts of herself? So I would say there’s going to be a gradation, evolution of that process.

AX: In Season 1, Syd said, “When somebody touches me, I feel all of these ants under my skin.” I couldn’t tell if that was a description of what she really felt, or if that’s what she was saying to avoid explaining what actually happens.

KELLER: I think she does have some true physical sensations, but I think it’s meant to say that what does it feel like when you get close to someone and lose parts of yourself? That feels uncomfortable. That’s a physical sensation. So I think that’s part of what we were trying to say there.

KELLER: Yeah. It’s funny, because a lot of times, when Syd switches with someone, she gets knocked unconscious, so I sort of hand the baton off. My body is unconscious in the van, so they play me, most of the time. But the gift with Aubrey – I think there’s an illusion around her sometimes that may or may not be true. I’ve been lucky to be her friend and feel as if she cares and loves me, and I love her. So we’ve been able to be comrades in a really incredibly tricky environment. This is not child’s play, this is really deeply existentially tricky for all of us, so it’s been nice to have a girlfriend.

AX: You were working on Season 2 when the #MeToo movement got seriously underway. Do you have any reactions to that that you are comfortable sharing?

KELLER: We [Keller and Plaza] got dinner after a lot of these reports came out and cried to each other, and just shared all of our experiences with things, and how we’re dealing with very, very small things. I think things that are coming out right now are very large things, and it’s time, but it’s unearthing, and not everyone’s ready to talk about it, and so we all have to process it in our own way. We’ve always been having these conversations. Whether that’s public or not, we’ve always been talking about it. This goes back to elementary school, middle school, the way that girls are treated.

AX: Professionally speaking, you came out of the Minneapolis stage community. Do you have plans to do more work there?

KELLER: There’s Jon Ferguson’s theatre company, WLDRNSS. Look it up. He is truly exceptional. And not unlike LEGION, very surreal, playful, devised pieces. We’ve been talking for years and years, and it’s time for me to go home and regroup. This [Los Angeles] is unfamiliar land for me, and I have to keep reeling myself back to myself. I’ve been in talks with the Guthrie [Theatre in Minneapolis], I’ve been trying to communicate with many theatres back there, just to raise my hand and say, “Hi, I’m here, I want to audition, consider me.” It was such a formative time in my life, and has pushed me to be who I am and make the decisions that I’m making, in many ways that I had no idea of until now. And so I just want to give back in more ways than just a donation, but give back with my time and my collaborative, creative abilities.

AX: And what would you most like people to know about LEGION Season 2?

KELLER: They’ve got to tune in.