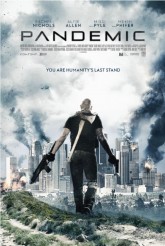 A decent zombie premise is hampered by bad shaky-cam 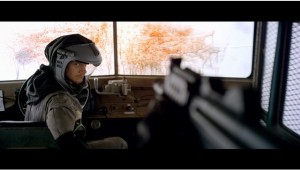 Although it’s been way overused, the BLAIR WITCH PROJECT super-shaky, handheld camera approach still makes sense for some movies. Unfortunately, PANDEMIC isn’t one of them. A decent premise – a small military squad attempts a rescue of survivors in a pandemic (read zombie) infested  Los Angeles with a good cast has to do unnecessary battle with the decision to shoot the whole thing from the point of view of body cams and security cams, with no rhyme or reason as to when the shots switch from device to device. At the press screening, this approach actually chased a few viewers with motion sickness from the theatre.

For those who can cope with extreme frequent camera movement (and less frequent but extreme gore), PANDEMIC acquits itself fairly well, with at least one good and well-prepared plot twist. CDC virologist Lauren James (Rachel Nichols), newly returned to Los Angeles from New York, is conscripted onto a military team seeking survivors in the city. Dr. Greer (played with understated authority by Paul Guilfoyle) shows Lauren detainees in various stages of a mysterious virus that eventually causes … well, you know, even if nobody ever says the word.

Lauren is nominally put in charge of a small group that includes tactical shooter Gunner (Mekhi Phifer), cynical driver Wheeler (Alfie Allen), and friendly but grieving navigator Denise (Missi Pyle). It doesn’t take us or the characters long to notice that Lauren doesn’t exactly have leadership skills, or even survival skills, for that matter.

Will the team reach their objective? Will Lauren live long enough to figure out how to defend herself? What are the secrets the various characters are keeping? And is Wheeler right about the sinister aspects of the base camp?

Dustin T. Benson’s screenplay has some smart notions about how a patchwork defense against a zombie apocalypse might work, as well as some interesting variations on the infestation itself (crazed but sentient behavior is one of the scarier stages here). Director John Suits has some effective moments of creepiness and bloodshed here, and he also does a laudable job of making Los Angeles both recognizable and plausibly deserted.

Nichols does well as the stunned but determined protagonist. Allen (Theon Greyjoy in GAME OF THRONES), Pyle (in a relatively rare dramatic turn) and Phifer (returning to the Z zone after costarring in the 2004 DAWN OF THE DEAD remake) all deliver on their characters as well.

However, the decision to shoot everything from a variety of constantly moving cameras is damaging. First of all, it makes no dramatic sense – there’s no revelation in the angles and no narrative logic after awhile as to which lens is capturing the action. Then there’s the matter of large chunks of the film being hard to see. There are plenty of ways to create a sense chaos without descending into stretches of visual incoherence, and lots of methods of compensating for a low budget without literally hiding the images.

There is ample evidence elsewhere in PANDEMIC that its makers know and care what they’re doing. It’s a shame they opted not to give us a better look at their creation.