Home » I saw the light review 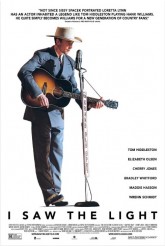 Movie Review: I SAW THE LIGHT

Tom Hiddleston is wonderful as Hank Williams, the surrounding film less so 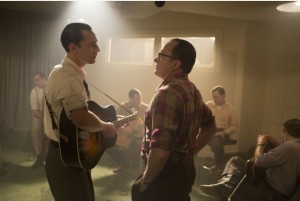 Playing the legendary country singer/songwriter Hank Williams in I SAW THE LIGHT, Tom Hiddleston displays so much joy in some of the performance scenes that the movie has flashes of being wonderful. True, Hiddleston, born in 1981, doesn’t exactly look like he’s 23, the age at which we meet Williams at the start of the film. Still, what’s in his eyes when Williams makes it to the stage of the Grand Ole Opry is exactly what most people attending a live performance hope to see – a transcendent sense of ecstasy, of being in the perfect place at the perfect moment with the kind of soul that makes each witness to it feel like they’re experiencing an individual musical revelation. From this evidence, we don’t have any questions about how and why Williams became a star, whether or not it played like this or not in real life.

When I SAW THE LIGHT gets out of musical mode, though, it just about stalls. This is no fault of Hiddleston or his fellow actors, among them Elizabeth Olsen as Williams’ ambitious wife Audrey, Cherry Jones as his possessive mother Lillie, Bradley Whitford as staunch supporter Fred Rose and David Krumholtz as journalist James Dolan. There is a pattern in the stories of performers who burn bright and flame out early, and Williams’ arc, as depicted here adds nothing new to the canon. Even fans of the celebrity tragedy genre may feel less than edified by one more look at a tremendously talented young man who fights to be seen by the powers in his industry only to succumb to alcohol, painkillers, womanizing and erratic behavior.

Director/screenwriter Marc Abraham, working from the book HANK WILLIAMS: THE BIOGRAPHY on the one hand gives us Whitford as Rose in black-and-white interview footage telling some stories about Hank, but these serve more as general mood setters than to clarify plot points. When things could stand a little explanation, we don’t get it. Scenes of domestic drama are played honestly and expressively by Hiddleston and Olsen, but once we get that Audrey’s ambitions exceed her abilities, the sequences are repetitive. We don’t even know how Hank feels about this – does he want Audrey to do well, does he imagine she’ll settle into being a wife and mother, does he feel his own career is being hampered, does it matter at all to him? For the amount of time spent on the issue, it seems like there ought to be a little more consequence.

But I SAW THE LIGHT doesn’t provide much narrative cause and effect. Hank drinks and it messes up his career somewhat, but never to the point where he loses his audience. Then there are out and out misleads – there’s such a build-up about the state of the weather and the youth of a driver that viewers may come to the conclusion that a key character dies in a car accident rather than of other causes (no accident occurred).

Abraham seems to want to emphasize Williams’ enigmatic duality by usually presenting the character at least partly in shadow, and sometimes from the back. We receive the point when we’d rather have a better look at the performance. In a lot of ways, this is a metaphor for I SAW THE LIGHT as a whole – we see enough to make us wish we could see much more with greater clarity.