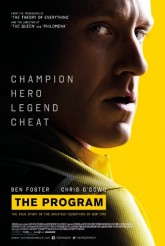 Intriguing, but at a bit of a remove 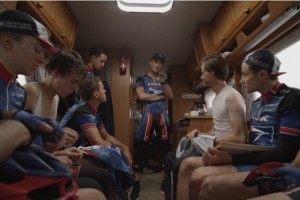 THE PROGRAM begins with a lone cyclist on a paved mountain road, clouds billowing to one side of the cliff as he determinedly pushes forward. This is a fitting introduction to seven-time Tour de France winner/disgraced athlete Lance Armstrong, as played here by Ben Foster.

For those who weren’t paying much attention at the time, Lance Armstrong survived cancer in his twenties to achieve bicycling fame in what is generally acknowledged as the toughest cycling racing event in the world, the mountainous Tour de France. Armstrong established a cancer research foundation and gave greatly of his time to fellow cancer sufferers, which for many people added a moral dimension to his ambitions. Accused of taking performance-enhancing steroids to achieve his wins, Armstrong successfully sued his accusers. Then he came back to cycling after those seven victories and proof of doping began to surface in monumental quantities.

The movie THE PROGRAM offers one view of Armstrong’s thoughts on what he was doing, which here is that he felt that coming out the other side of cancer entitled him to do whatever he had to do in order to survive; questioning his actions he viewed as tantamount to an attack on his life.

This is borne out by Foster’s fierce, intense performance – there are times when his version of Armstrong looks ready to kill everyone. It’s an entirely cohesive, convincing portrait of a man who has hit on a winning strategy and is convinced that the ends justify the means.

The movie, however, doesn’t quite measure up to the subject matter. It may be that director Stephen Frears and screenwriter writer John Hodge, working from David Walsh’s nonfiction book SEVEN DEADLY SINS, felt a little overwhelmed by the sheer scope of events and subplots. There are the suspicions of sports journalist Walsh (played here by the engaging Chris O’Dowd), the championship “program” devised by Dr. Michele Ferrari (Guillaume Cadet) involving prescriptions, the pressure on Armstrong’s teammates to comply with their leader’s agenda, the profits made by the drug distribution, Armstrong’s charity work, the accumulating accusations from former associates – in trying to make sure that all factors are present and accounted for, the filmmakers don’t have time to fully flesh out any of them.

The result is kind of a flip-book view of events. We understand what happened, and why, more of less, but a lot of key factors don’t quite hang together. This may be perfectly lifelike, but it keeps us at a remove – we don’t feel like we’re in there with Armstrong (for one thing, the movie is a little appalled by him), but we don’t get enough time with Walsh to feel like we’re on the ground with him, either, and no one else looms large enough to be a serious contender for the bulk of our attention.

This said, Jesse Plemons is strong as a particularly disillusioned cyclist, and Lee Pace is entertaining as Armstrong’s agent.

THE PROGRAM is never less than interesting, and the cast is high-caliber. However, the movie makes us want to know more, rather than come away with the sense that we’ve been through an experience ourselves.