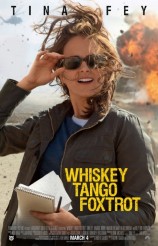 Uneven fictionalized account of a war correspondent’s time in Afghanistan 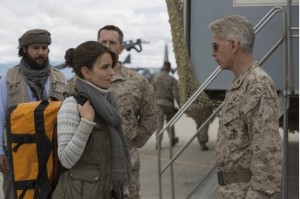 WHISKEY TANGO FOXTROT is a fictionalized dramedy about war correspondent Kim Barker’s nonfiction book THE TALIBAN SHUFFLE: STRANGE DAYS IN AFGHANISTAN AND PAKISTAN. Her onscreen counterpart here, Kim Baker (Tina Fey), stays with the story in Afghanistan. The movie, written by Robert Carlock and directed by the team of Glenn Ficarra & John Requa, is to be commended for its relative restraint – it doesn’t try to put Kim at the center of every key incident and its comedy is more cerebral than the trailers might lead us to expect. On the other hand, there are commercial impulses warring with the underpinnings of the premise, much as the onscreen factions battle one another. The results are better than this comparison might suggest, but it’s a bit like trying to marry a fish out of water comedy to ZERO DARK THIRTY.

It’s 2003. Kim is a behind-the-scenes type at a major network news department when we meet her. Offered the chance to be on-camera talent if she agrees to cover the war in Afghanistan, Kim decides it’s a good career move and accepts the promotion. She winds up at a way station for international journalists of all stripes, including the glamorous Tanya (Margot Robbie), who is overjoyed to have another woman around. Kim is occasionally embedded with a group of U.S. Marines, led by the resigned-to-it-all Gen. Hollanbeck (Billy Bob Thornton) and, despite herself, becomes increasingly friendly with a crude Scottish combat photographer (Martin Freeman).

The incidents range from illuminative – the explanation for why a village well keeps getting blown up makes a lot of sense – to mildly alarming to predictable to just cartoonish. (Alfred Molina is a wonderful actor, but there’s no rescuing his corrupt, smarmy politician character from caricature.)

Some of the scabrous dialogue is wonderful, and there are moments of real engagement. Oddly, some of the best and funniest moments occur not in the thick of things, but in the romantic bits between Kim and Freeman’s enamored Scotsman. There are tense moments, but we’re never terrified as we should be.

A larger problem is illustrated by the conversations between Kim and her local driver, the thoughtful Fahim (Christopher Abbott). Fahim had been a doctor who treated heroin addicts, and he compares the highs caused by drugs to the highs caused by the adrenaline rush of covering dangerous situations. We understand what he’s talking about, and we understand that Kim is meant to be experiencing such a psychological addiction, but we’re never made to feel it. Part of it is that Fey, although a strong dramatic actress, seems entirely too grounded to be swept up in more than an isolated moment of excitement – her Kim just has too much common sense to be a thrill (or anything else) junkie. The other problem is that we’re never made to feel that we’re experiencing or witnessing something once in a lifetime; WHISKEY TANGO FOXTROT in fact shows us all too well how someone could walk away from bearing witness to this.

WHISKEY TANGO FOXTROT is sometimes entertaining, sometimes annoying, and sometimes does make us think. Even so, it’s just not as deep as it wants or needs to be to hit home.