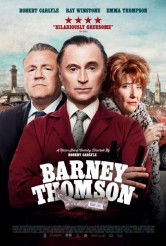 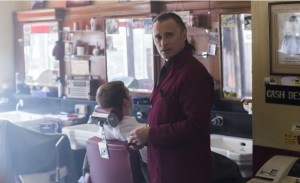 Scottish actor Robert Carlyle makes his first stab at feature film directing with BARNEY THOMSON. While the setting – urban Glasgow – and the sensibility are perfectly Scottish as well, the movie is more reminiscent of English black comedies like KIND HEARTS AND CORONETS than, say, TRAINSPOTTING.

Working from a screenplay by Richard Cowan and Colin McLaren, adapted by Cowan from Douglas Lindsay’s novel THE LONG MIDNIGHT OF BARNEY THOMSON, Carlyle gives us a city full of people living lives of desperation and resignation, quiet and otherwise. One of the most desperate and resigned is the title character, played by Carlyle as a barber who is reasonably content with being both bored and boring, until it threatens to affect his livelihood.

When Barney’s boss announces that Barney is being fired because he doesn’t chat with the customers and has the occasional outburst, there’s a bit of a scuffle and Barney is left with a dead boss on his hands. Barney panics and enlists the help of his formidably mean mum (Emma Thompson, playing older) with the body. Coincidentally, the area is being terrorized by a serial killer who specializes in sending body parts to the families of the victims. Hampered at every turn by others in his department, Detective Inspector Holdall (Ray Winstone) rightly suspects Barney of hiding something, but supposes there’s a connection to the serial murders.

There are a number of coincidences here, but perhaps the biggest stretch of the imagination required is that we’re meant to see Carlyle’s wretched, antisocial Barney as dull. Pathetic, sure, funny, often, scary, occasionally, but he’s entirely watchable from first to last. Winstone’s fish-out-of-water Londoner is a fitting counterpart, Barney’s opposite in some respects and utterly not someone you’d want on your tail, but miserable in his own way. Thompson, who’s actually only two years older than Carlyle, pulls off her virulent old bat character with such scorn and venom that it’s sometimes hard to watch her.

BARNEY THOMSON mostly manages its tonal sleight of hand. Visuals that might be gruesome in another context are here juxtaposed with reactions of consternation or exasperation rather than horror. The general outlines of the story are amusing and we’re engaged enough to continually be curious about what will happen next.

Still, it’s hard to watch a grown man (or woman) cringe, and Barney spends a fair amount of the movie in a state of abject humiliation. It’s too realistic to be funny, but the context and the attitude don’t want us to take it seriously, either. We’re left to be interested without either laughing out loud or feeling actual sympathy.

BARNEY THOMSON aims to amuse and to startle, but it doesn’t seem to want to go in for the comedic kill, either. Carlyle achieves a consistent wry, shaggy dog tone that works on low-key terms. Fans of its stars will be pleased; fans of murder comedies have seen both better and worse.