Home » eye in the sky review 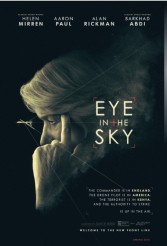 Movie Review: EYE IN THE SKY

Taut, timely and a true test of ethics 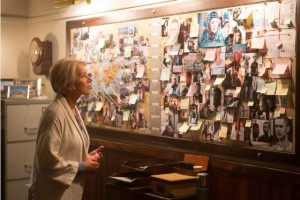 Helen Mirren stars in EYE IN THE SKY | © 2016 Bleecker Street

The term “thought-provoking” is thrown around so much that it’s almost meaningless – anything that attracts your notice should provoke some sort of thought – but EYE IN THE SKY brings the phrase back to its original intention. A drama about the whys and why-nots surrounding the possibility of a join U.K./U.S. drone strike on a “high-value” target in Kenya, the film presents so many possibilities and points of view that it is almost guaranteed to make anyone, regardless of their sensibilities, question their ideas about whether or not such strikes are ever justified.

With the real-life U.S. drone strike on a training camp for al-Queda affiliate Al-Shabaab this past weekend, EYE IN THE SKY could scarcely be more timely. In the film, a tiny mobile spy camera has found five members of Al-Shabaab, two of them British and one American, in a residential neighborhood in Kenya. So small that it can avoid detection, the camera follows these people into a house, where it sees and transmits video of them preparing a suicide vest.

British Col. Katherine Powell (Helen Mirren) is thrilled. She’s been tracking one of these people for years. Although this is initially intended to be a capture operation, conditions in the neighborhood make it clear that an attempt to send in troops will result in a full-scale battle. A drone strike on the house where the terrorists are meeting will prevent ground conflict, not to mention destroying the weapons on the premises, including the vest, which is armed to kill up to eighty civilians.

Then a little girl (Aisha Takow) innocently enters the proposed strike zone and sets up her bread stand. And everyone involved starts weighing the consequences.

There are points of view at both ends of the spectrum. Powell is determined to bring down her quarry and will argue, rationalize and maneuver anything to that end. A politician in the strategy room (Monica Dolan) is adamantly against the strike, not wanting to sacrifice one child’s life for the possibility of saving many more. Everyone else is caught somewhere in the middle, from Powell’s commanding officer Lt. General Benson (Alan Rickman) to the two American pilots (Aaron Paul, Phoebe Fox) operating the drone from the safety of a Stateside military bunker, to the local operative on the ground (Barkhad Abdi).

EYE IN THE SKY has some great action on the ground, courtesy of Abdi’s resourceful character and his run-ins with local militiamen. However, the film’s interests are primarily cerebral and emotional. The characters are articulate and passionate and fighting over life and death stakes; writer Guy Hibbert and director Gavin Hood aren’t cynical, and they don’t fall back on creating cynical villains, either. The bad guys here are those who want to stay out of the decision-making process (Jeremy Northam and Iain Glen both find the humor in politicians who really would prefer to pass the buck).

Mirren is so fierce and eager and certain that we’re partly swayed by Powell’s demeanor. The late Rickman, in one of his last performances, brings a haunted gravity to the general. Paul and Fox are warmly human as the increasingly appalled military pilots, Abdi is magnetic and Takow is adorable.

Most movies, no matter how skillfully made, cannot dislodge a viewer’s firmly-held convictions. EYE IN THE SKY won’t do that either, but it is powerful enough to at least make us understand all points of view on its subject.