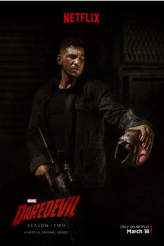 The new show runners talk the bad guys, The Defenders and more 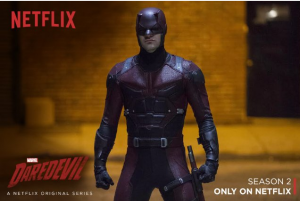 MARVEL’S DAREDEVIL is back with a 13-episode second season on Netflix, starting March 18. Blind Hell’s Kitchen lawyer/secret crime-fighter Matt Murdock (Charlie Cox) has triumphed over gangster Wilson Fisk, only to find that his turf is now being invaded by vigilante Frank Castle, aka the Punisher, played by THE WALKING DEAD’s Jon Bernthal. Female justice dispenser Elektra (Elodie Yung) also comes to town.

There are some behind-the-scenes changes as well. Doug Petrie and Marco Ramirez, Season 1 staff writers, are now show runners and an executive producer and co-executive producer, respectively, for Season 2 (Season 1 show runner Steven S. DeKnight is directing a movie this year).

AX: Can you say if the Season 2 villains will be canonical or created for the show?

DOUG PETRIE: Well, I wouldn’t say “villains,” but the antagonists are Elektra and Frank Castle, so those are as canonical as it gets. Where I think we can tip our hat to Steven DeKnight in Season 1 is that he gave Ben Urich [the reporter played by Vondie Curtis-Hall] the really wonderful line, “There are no good guys, there are no bad guys, just people with different agendas.” And I think that those, our heroes and our villains, are people with deeply conflicting agendas.

I think for us, at least, because we work in a comic book world, and because we want to make as gritty and smart and sophisticated a comic book show as possible, we in the room, at least, stay away from the word “villain” as often as possible. I would not describe anyone in any season of THE WIRE as a villain, necessarily.

AX: To rephrase the question, is there anybody with a multi-episode arc who angers both Matt and Frank?

PETRIE: Well, I think what’s interesting about these guys, as they go through their journey, is that sometimes – what’s going to make Matt very uncomfortable is that to him, it’s very clear – “We have different agendas.” And you can’t play that forever. There are going to be times when their agendas are muddied, and that makes Matt extremely uncomfortable.

AX: With the influx of other Marvel characters in Season 2, going towards something like the Defenders or a more collaborative story with these characters, how has that changed the way you approach the material?

PETRIE: It’s definitely opened the doors. I think we got really good at, along with all of our writers, and again, our cast – I can’t state how much Charlie and Jon and Eldon [Henson, who plays Matt’s law partner and best friend Foggy Nelson] and Deborah [Ann Woll, who plays Matt and Foggy’s associate Karen Page] and everybody come to us with suggests and ideas, and we almost always fold them in. I think what we’ve gotten better at this year, by necessity of the storytelling, as we spin more plates, and we have more threads of storyline going through the narrative and, as we look forward to what’s coming up ahead, we feel like we’ll be able to handle more storylines, complicated storylines and interweaving different characters in new ways.

MARCO RAMIREZ: I want to also add, we didn’t just add Frank Castle and Elektra to the world. We’re also continuing the storylines for Foggy and Karen. So it’s just a bunch of plates. And it’s absolutely that. It’s an exercise in spinning plates and lighting them on fire and making them spin as quickly and awesomely as possible.

PETRIE: And not letting them crash. And I think that we’re amazed at how little silverware we’ve broken this year.

AX: Netflix’s MARVEL’S JESSICA JONES and the upcoming MARVEL’S LUKE CAGE are also set not only in the DAREDEVIL universe, but in that neighborhood. Will you be doing crossovers?

PETRIE: In terms of DAREDEVIL Season 2, we were kind of our own gig. We had both the cooperation and the support of Marvel and Netflix, but we were pretty much in our own Matt/Foggy/Karen world.

RAMIREZ: But that said, I would add that one of the perks that comes with a job like this is, as fans, we got to read their scripts. So that was pretty great. To be able to know what they were doing on the other side of the hall was pretty amazing.

AX: Can we expect any cameos from other Defenders?

AX: Without giving away much – not that you would – what can you tease about Season 2?

RAMIREZ: At no point did we want to drop anything that was part of Season 1. The most fun part of this job, I think for us was, we came in early, had a big plan about what we wanted to do with everybody throughout the entire season, and as we got to drafts, as we got more writers in the room, it became very clear to us, actually, these characters are speaking to us and they want to be taken in these directions, or actors like Jon and Elodie joined us and were so incredible that we just wanted to write for them and to them and to their many, many strengths, so in a weird way, it was kind of a half and half. It was almost like having one of those half-baked breads. We had our idea of who these people were, but then suddenly, they started talking back to us.

PETRIE: Yeah, I think that’s something we discovered that was really great. We did have a game plan for all thirteen episodes, and as we got somewhere near halfway through the season, we were kind of like, “Oh, these characters don’t want to do what we pre-fab designed for them. They’re speaking to us.” And also, the actors – again, I can’t over-emphasize how wonderfully collaborative they all were, where they say, “Hey, what about this, what about that? I would like to try this.” And we almost always absorbed that into it. So the season took us on a ride, as much as we took it on a ride.

AX: How affected is Karen by the fact that she shot and killed a man in Season 1, and how will she interact with Frank Castle?

RAMIREZ: Almost everyone on our show is haunted, everyone has a secret, everyone is haunted by something. They may not run around at night in a mask and do awesome things, but everyone has some kind of great stuff that we as an audience and we as comic book readers can’t wait for these two trains to collide. Part of the game for us is releasing the dragon as often as we can without necessarily giving it all up. So that’s one of our challenges.

PETRIE: Yeah. The audience knows that Karen Page knows what it feels like to pull the trigger and put a guy down. She knows what that feels like and she had to deal with that, and even in Season 1, she was specifically haunted by it, literally having nightmares and starting to deal with that in a very hardcore way. So we can’t go into specifics, but there’s no way we’re going to drop that thread, because we love Karen Page, and that’s a big part of who she is right now.

AX: Both of you have done some non-genre projects. Is there something about genre that specifically feeds your soul?

PETRIE: Oh, that I can answer for both of us. I think as storytellers, we feel that the vibrancy of genre and the extremity of expression that comes in genre is so true to life. And that’s why it’s so great to work with Marco, and to work with our writers, and to work with this great cast, where [Matt] is a guy who has rage issues, and he doesn’t go home and talk to his wife and talk to his shrink, and kind of work it out through exercise. This is a guy whose demons are literally externalized, and he wears horns on his head and beats some sense into people. Genre, whether it’s Grimm’s fairytales, or BUFFY, or any of the great comic books that we love, we feel like it’s a really pure, very true psychological expression.

RAMIREZ: And it’s something that we say a lot about this show, but I think the saying is true – one of the reasons I love this job and why we love this show is, we get to bend genre, we get to collide genres into each other. So we are much a superhero show as we are a crime drama. Season 1 was as much a superhero show as it was investigative news drama. So the idea that we don’t come to work and just have to do the typical cape stories, where you introduce a villain every episode and he gets put in jail at the end of every episode – the idea that we were actually operating in this other place that has not really been examined in many ways is really exciting to us.

AX: Can you say how closed-ended or open-ended Season 2 will be?

PETRIE: Well, I would say that even in Season 1, we closed the loop of plot, but we left the threads of emotion wide open. I think there are questions about the love triangle among them – does Foggy still love Karen, does Karen have feelings for Matt, all of those things, is Matt satisfied now that he’s defeated Wilson Fisk? Would he quit, or would he keep going? All these questions are still very much alive, and I think at the end of Season 2, we keep our emotional threads wide open to explore, but I think we definitely want to satisfy our viewers, as we would want to be satisfied after a particularly great run of the comics.

AX: Will we be seeing Rosario Dawson’s character Claire Temple return in Season 2?

RAMIREZ: Rosario Dawson is one of the best actors I’ve ever worked with.

PETRIE: We love Rosario and stay tuned. I don’t know what we can say about that.

AX: A lot of your main actors have major genre credits – Charlie Cox was the lead in Neil Gaiman’s STARDUST, Deborah Ann Woll was a lead on TRUE BLOOD for seven years, Jon Bernthal was on THE WALKING DEAD, and so on. Do you know if genre pedigree played any part in casting?

PETRIE: No. I mean, there are so many different kinds of pedigree. We just go for the best actor, and if they happen to have a really appealing skeleton in their closet, thumbs up.

PETRIE: You know, we’re fans, too, and I think I can say for both of us that it’s been such a treat to be partnered with Marco and to work together with the whole team to create the DAREDEVIL that I personally would most want to see. This is absolutely the season of this character that, if I could go back in time and show my fourteen-year-old self, “This is what you’re going to do and this is the DAREDEVIL you’re going to see,” it’s exactly what I would want to see.

This interview was conducted during Netflix’s portion of the most recent Television Critics Association press tour in Pasadena, Calif.