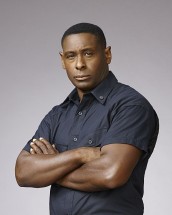 As J'onn J'onzz, the actor talks working on other DC related shows and his love of comics 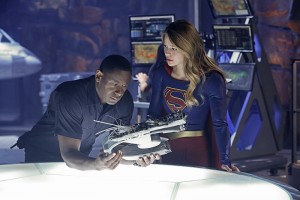 In SUPERGIRL, on CBS Mondays at 8 PM, our heroine in her alter ego of newspaper executive assistant Kara Danvers, played by Melissa Benoist, works in a pretty swanky-looking high-rise. However, Kara’s adoptive sister Alex Danvers, played by Chyler Leigh, has a much cooler workplace, the literally underground headquarters of the Department of Extranormal Operations, aka D.E.O.

When CBS allows the Television Critics Association press tour to visit the SUPERGIRL sets, the huge soundstage, with faux cave walls and intricate technology stations, is thrilling to see. It may be make-believe, but it still looks pretty impressive.

In the SUPERGIRL universe, the man in charge of this place is D.E.O. Director Hank Henshaw, played by Birmingham, England-born David Harewood. Viewers, and Kara and Alex, have discovered that Hank isn’t really Hank – he is the last green Martian, J’onn J’onzz, aka Martian Manhunter, who has taken on Henshaw’s identity with benevolent intentions.

Harewood, who will soon be seen in AMC’s THE NIGHT MANAGER, has had some experience playing government officials before – he spent two years on HOMELAND as Deputy C.I.A. director David Estes, before his character was tragically blown up (along with most of his colleagues). Harewood has even portrayed nonhumans prior to this, as he is the fairy king Oberon in Julie Taymor’s film of Shakespeare’s A MIDSUMMER NIGHT’S DREAM. However, J’onn J’onzz is both Harewood’s first Martian and his first superhero.

AX: Do you know if you were cast as Hank Henshaw, head of the Department of Extranormal Operations, on the basis of you playing the deputy C.I.A. director on HOMELAND?

DAVID HAREWOOD: I think I have some kind of authoritative presence, and I think that’s what they were looking for with the character of Hank, and again, I think I was the first person that they saw, and to be honest with you, I wasn’t expecting to be doing SUPERGIRL, but I was really blown away by the scripts. And I really liked the scripts, I thought they were very, very clever, so yeah, I was straight on board as soon as I was asked for it.

HAREWOOD: They’re pretty covert. Our operation’s completely in the dark. I wouldn’t think people know very much about us – I would say we’re probably a couple of steps under the C.I.A. I think it’s a global operation, with probably far-reaching tentacles, and a lot of money. We’ve got a lot of tech.

AX: Were you familiar with the SUPERGIRL comics? Do your little girls read these comics?

HAREWOOD: I actually was a huge comic book fan, I used to read mainly Marvel Comics, and I read a few DC – I read a lot of BATMAN – so when it came up, I was straight on board, I was very excited by it.

AX: Were you familiar with any of the DC television universe before this?

HAREWOOD: I’d seen a little bit of ARROW and THE FLASH and knew how successful they had been and how huge they had been, so again, to be asked by [series co-creator/executive producer] Greg [Berlanti] to come on board was quite special, so I’m very, very happy to be doing it.

AX: Obviously, you’re not fighting Superman any time soon, but you’re fighting Kryptonians and other super-powered beings. How much of a badass does one have to be to feel comfortable doing that as a day to day job, and do you have to psych yourself into that?

HAREWOOD: You kind of do, but as soon as you put that costume on and you realize that he’s the head of this organization, it’s quite a thrill, so there is nobody badder-ass than Hank Henshaw. Trust me, I think he’s something of a dude.

AX: How far ahead did you know that Hank Henshaw is really J’onn Jonzz, the Martian Manhunter, who has adopted the appearance of Hank Henshaw?

HAREWOOD: I didn’t know at all [at the time of being cast]. I knew from [the airing of] the first episode of the season that I was not Hank Henshaw.

AX: Did you start playing Hank’s private moments any differently once you knew?

HAREWOOD: No. I kept the whole thing schtum [British slang for “quiet”]. Even to my kids. Nobody – my kids kept saying, “Are you good, are you bad, what are you up to?” I said, “I’m not telling you.” Until the reveal. And then they literally flipped out. I brought these kids to the set. They came round to the HOMELAND set and they were like [indifferent], “Mmm …” I brought them to this set and they literally were walking around like this [widens eyes, opens mouth]. It’s probably the first thing that I’ve ever done that my kids have been absolutely glued to, and that makes me very happy.

AX: J’onn J’onzz is one of the seven founding members of the Justice League. Have you read any of those comics?

HAREWOOD: I did. I’m currently reading a lot of the JUSTICE LEAGUE stuff. It’s funny to see him in that group, still being the kind of center of it, the strongman of it. So it’s a real responsibility for me. It’s a real buzz. It’s a great character for me to play.

AX: Do you enjoy playing these sorts of tough roles, or would you like to play somebody who faints occasionally?

HAREWOOD: [laughs] I wouldn’t mind doing that, but this guy is very interesting.

AX: Can you talk about the flashback episode where we see J’onn take on Hank’s identity?

HAREWOOD: There are a couple of flashback episodes, and Episode Eleven [“Strange Visitor From Another Planet”], which is the first one, is very emotional. It was also filmed around the same time as the Paris attacks. The whole notion of killing people and wiping people out was very difficult to play and resonated with me particularly, so it’s a very difficult episode to watch, but it becomes not just a kind of comic book show, it’s a show that touches upon a lot of difficult subjects. You really get to see Hank’s back story, you really get to see why he is the last green Martian.

AX: How closely do they stick to the D.C. back story for the Martians?

HAREWOOD: Very close, but I think again, what’s wonderful about these writers is that they take well-known D.C. lore and spin it slightly and retain some of the original subject, but just give it a fresh touch.

AX: As the last green Martian, does J’onn have a bond with Kara, who is one of the last Kryptonians?

HAREWOOD: He does, but he’s also aware that she’s a very pretty young girl and he’s a seven-foot green Martian. It’s okay for her – she keeps talking about, “You should just be yourself, you don’t have to be Hank Henshaw anymore.” But aliens can’t run the D.E.O. and if he comes out, and if he is himself, he’s going to scare a lot of people. So he’s very concerned with protecting not just himself, but with everyone else.

AX: You’ve said before that you would like to play not Othello, but Iago in OTHELLO. Is that any closer to happening?

HAREWOOD: Still waiting. I have plans afoot, so let’s keep our fingers crossed on that one.

HAREWOOD: Oh, yes, I do. I have a movie [which played at] the Venice Film Festival called FREE IN DEED, which is very different, about a black Pentecostal Church minister, I have a Sacha Baron Cohen movie [THE BROTHERS GRIMSBY], Julie Taymor’s movie of MIDSUMMER NIGHT’S DREAM is doing the circuit now in the festivals, so there’s a lot.

HAREWOOD: That it’s a very refreshing take, very, very original, and it’s just full of warmth. Not only is it exciting, but I think it’s also – I think it’s going to have quite a lot of emotional content for people as well.