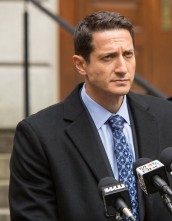 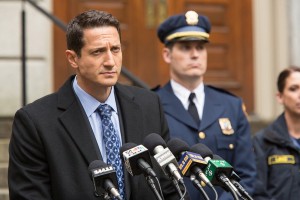 NBC’s GRIMM, Fridays at 9 PM, has just celebrated its hundredth episode (number twelve of Season 5). All of the characters are going through turmoil, including Portland police captain and secret Zauberbiest Sean Renard, played from the first episode onward by Sasha Roiz.

On the professional front, Renard was asked to use his position to endorse a mayoral candidate, who was assassinated. Now Renard is being pushed to run for mayor himself, by the same cabal behind the killing. On the personal front, Renard has a supernaturally rapidly growing young daughter, Diana, with former lover Adalind (Claire Coffee). Adalind is desperate to get Diana back, since Renard gave the child away for her own safety.

At a GRIMM event held for the SAG/AFTRA membership in Los Angeles, Roiz talks about what’s new with Renard. Warning – some spoilers ahead.

AX: How surprised were you to get to Episode One Hundred?

SASHA ROIZ: In Season 1, it would have been a huge surprise. I didn’t even think we’d get picked up for a full season. By the end of Season 2, I had suspicions that we might go five. I think there’s a math to some of these things.

AX: As far as what’s happening with Renard, are you playing it as though he’s aware of what the audience knows, which is that these people who are urging him to run are actually behind the mayoral assassination?

ROIZ: I think that was a surprise, the assassination, I think there’s no two ways about it, but I generally play Renard as though he’s five steps ahead of anyone he’s talking to. [laughs] Even if he has no idea what he’s talking about.

AX: Would you say there’s any kind of comparison between actors and politicians? I mean, is there something fun about playing the political side of Renard, playing him as someone who’s acting a bit for the news cameras and the rally crowds?

ROIZ: Yes. It’s fun, it’s fine. There’s a lot more to that aspect than just the political part – there’s actually a lot of intrigue behind it which I’m equally enjoying. You’ll see that.

It’s very meta right now, because ever since Season 1, they used to call me “the Mayor,” just because I was so in love with Portland [Oregon, where GRIMM is takes place and is produced], and I knew everything about it from Season 1, so everyone would come to me for recommendations for restaurants, hotels, weekends, and for a long time, the running joke was, “He’s going to run for mayor when the show is over.” And here we are with this little storyline, which I think among the writers is a little bit of an inside joke. So be careful what you wish for.

AX: Did you know Portland well before you came there to do GRIMM, or were you just the GRIMM company member who became most familiar with it the most quickly?

ROIZ: I’d never been there before, and now I hope to never leave.

AX: So Portland is your home base now?

ROIZ: It’s been home base for I think all of us, but I would like to keep a foot there at all times. It just makes me very happy – I’m a big fan of the Pacific Northwest.

AX: With Adalind being so determined to find Diana, her daughter with Renard, should we be looking forward to Renard confronting his daughter, who when we last saw her was growing at a rapid rate?

ROIZ: At a rapid pace. She’s not quite [an adult], but she is a lot older than we first saw her. Yes. It’s a great storyline. It actually is really fun to work opposite this child that he has all these deep ties to, even though he had given her away, mind you [laughs], but yes, it’s a lot of fun, and it’s going to complicate the story very much.

AX: How is it playing a parent with an estranged child?

ROIZ: Well, it’s hard to [be] a parent in any case for Renard, because [Diana’s conception] was unplanned, he’s not somebody who readily shows emotion. I think this child brings out the gentlest side of him, which exists, which is deeply, deeply hidden, but yeah, it’s fun for me, because it brings out something in me as a person and as an actor that the character desperately needs.

AX: Are there elements of Renard’s story that you’re looking forward to exploring further?

ROIZ: I think certainly his relationship with his estranged daughter, as well as the Keys, as well as his own political power and ambitions, which will all be revisited. The Keys are a very tempting, very alluring thing for everybody.

AX: Do you have any favorite scenes, favorite episodes or favorite plot developments over the five seasons?

ROIZ: I think all my favorite episodes are the firsts, the midseason cliffhangers and the finales. They’re always amazingly strong and action-packed. I always enjoy them

AX: And what would you most like people to know about GRIMM going through the rest of Season 5?

ROIZ: That we’re going to tie in all the stuff that’s sort of been left untied for the last few seasons, and some really tremendous storylines, things that will definitely surprise audiences, a lot of conflict, a lot of action. I think the second half of the season is going to reward all our fans for sticking with us.