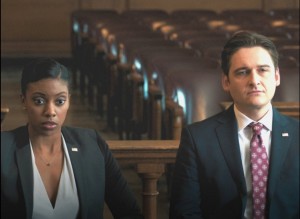 In Showtime Network’s BILLIONS, now on Sunday nights at 10 PM in its first season and renewed for a second, it’s the Wild East of Wall Street vs. the law. Self-made billionaire Bobby Axelrod, played by Damian Lewis, is in the crosshairs of U.S. Attorney Chuck Rhoades (Paul Giamatti). Everyone’s lives are greatly complicated by the fact that Chuck’s wife Wendy (Maggie Siff) happens to be the chief psychological advisor at Bobby’s firm.

Good thing for Chuck that his right-hand man is the diligent Bryan Connerty, played by Toby Leonard Moore. Moore, an Australian who often plays Americans, can currently be seen as the top aide to gangster Wilson Fisk (Vincent D’Onofrio) in the first season of Netflix’s DAREDEVIL and was in the Keanu Reeves action film JOHN WICK. He is also in the upcoming feature HALF THE PERFECT WORLD.

AX: Is playing an American something that comes easy?

TOBY LEONARD MOORE: This is something I’ve sort of been doing for the past five years of my life. I’ve told people I’m not even an Australian in real life any more. It does come kind of naturally – this is the first time I’ve played a New Yorker on screen, so that adds a whole lot of elements to it.

AX: Did you have to do any studying of the American legal system to play this character, or at this point, is what you’re doing entirely tied to the script?

MOORE: I’m a law school dropout [laughs]. I did three years of law, I think it was, before I went to acting school. But again, that was in Australia. This isn’t a world that I’m familiar with, so I had to do a bit of research. Also, one of my best friends in the world is a hedge fund manager and an Oxford-bred scholar, so I’ve been bending his ear a little bit, too. I haven’t told him any specifics, but he’s super-excited about the show. It’s funny, because it’s such a specific world, and it could be seen as sort of a big boys’ club, and I wasn’t so sure that it would be accessible to people. But it is. But yeah, there’s been some research for sure. Lots of reading.

AX: Do you have a back story for Connerty as to why he has a passion for working in the U.S. Attorney’s office on these kinds of cases?

MOORE: I do, yeah. He was raised by a single mother, he’s just inherently ethical, this guy. He had the chance to go to Harvard, but instead stayed in New York for family reasons, so he’s genuinely one of the good guys.

AX: How is working with Paul Giamatti?

MOORE: I pinch myself every day. He’s brilliant, and hysterically funny when we’re not actually rolling, and then there are times where I’m completely blown away and forget to act, because I’m just watching him and I’ve been such a big fan of his work for so many years and it’s amazing to get a chance to work with him personally.

MOORE: Yeah, this is the thing. I’m sort of like, “Who’s next? De Niro?” I’m starting to build up this reputation to work with tenured actors who are brilliant. They’re both fantastic. They’re both very different in their style of performance, but they’re both very [powerful]. And we have a lot of fun. It’s verging on unprofessional, I think, the amount of laughter that happens on set. I go home every day with a belly-ache, because Paul’s just so funny. And then you hear “Action,” and it’s goose-bump stuff. I forget to act sometimes, because he’s so amazing.

MOORE: You know what? What’s really cool about BILLIONS is, you may think, because it’s like world of finance, Wall Street-style thing, that it’s a big boys’ club. But I have to say, the female characters in this are so well-written. They really hold their own with the men. So I think it’s going to be really exciting.