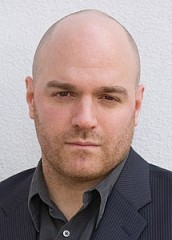 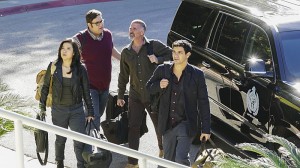 SCORPION, in its second season on CBS Mondays at 9 PM, has been renewed for a third year. Based loosely on real-life genius Walter O’Brien and his Scorpion consulting company, the action-adventure/comedy/thriller/drama stars Elyes Gabel as team leader Walter, Eddie Kaye Thomas as psychologically astute Toby Curtis, Jadyn Wong as mechanical expert Happy Quinn, Ari Stidman as fearful statistics whiz Sylvester Dodd and Katharine McPhee as the relatively normal Paige Dineen, who helps everyone else deal with the rest of the world as her brilliant young son Ralph (Riley B. Smith) flourishes in the high-IQ environment. Robert Patrick plays Cabe Gallo, the government liaison to the group.

Nick Santora, who developed SCORPION for television, also serves (with Nicholas Wootton) as executive producer and show runner. Santora’s previous credits include PRISON BREAK, BREAKOUT KINGS and VEGAS. At a CBS press event, he talks about his brainy characters.

AX: It’s probably too early to say anything about Season 3, but did anything change for you guys when you knew you were getting the Season 2 pick-up?

NICK SANTORA: We just stopped caring [laughs]. No. All it does is honestly open up brand-new avenues to tell stories. When you get a pick-up, it’s basically your bosses telling you, “Here’s a bunch of empty boxes, fill them with stories.” So you then know, “Okay, we have an opportunity to expand these characters, expand these relationships, get more adventures going.” It’s a little bit of a kick in the ass, but a good kick in the ass.

AX: It looked at first like the last two episodes were leading into at least an emotional cliffhanger with Walter and Cabe and with Walter and Paige, but then you resolved that …

SANTORA: Yeah, we tied it up.

AX: Since you knew you’d been renewed, did you consider doing a cliffhanger, or did you think that since people seemed to be enjoying the family vibe, you didn’t want to annoy people by saying, “Oh, the family in danger” over the summer?

AX: Do the actors ever come to you and say, “How on Earth do I pronounce this technobabble?”

SANTORA: [laughs] They do, and I say, “Don’t ask me – ask someone substantially smarter.” So they do, and they get the right answer.

AX: So they go and talk to the real Walter O’Brien or the people at the real Scorpion?

SANTORA: They talk to the real-life Walter, or they’ll look up a lecture on line to see how to pronounce something properly. Our actors are very conscientious about trying to sound as smart as their characters are. They become these characters, and they want to try to be as genuine as possible. Our actors really do care.

AX: How much are you drawing from Walter O’Brien’s/real Scorpion’s actual cases, how much are you inventing, and are there any cases that they have where you go, “That’s really interesting, but we can’t dramatize it”? 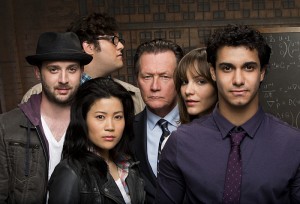 SANTORA: Yes. There are a lot of cases that the real-life Scorpion company has done that, one, no one will ever know about, because it’s all confidential with their clients and the companies they work for. There are others that Walter’s told us about that just aren’t right for television, it’s hard to dramatize certain things, like coding, it’s incredibly important work, but it’s hard to dramatize. To answer the first part of your question, I would say the majority of these cases are fabricated from whole cloth, but they’re inspired, if this makes sense, by Walter’s brilliant mind, and the brilliant minds of the people he works with. Walter’s never saved a little boy who’s trapped in a hole underground, but Walter did explain to me how you could keep someone alive underwater by oxygenating their blood without them ever inhaling once. So it’s a mélange of his brilliant mind and the absurd stories our writers make up.

AX: What’s your favorite episode of Season 1 and which one was the hardest to get all of the elements to come out properly?

SANTORA: By far, my favorite episode was Episode 1:12, with the little boy down in the sinkhole. I just thought it had a lot of heart, they were trying to rescue this child, and it just really touched a note with viewers. It’s one of my top five favorite episodes I’ve ever been involved with [in overall career]. An episode that was really hard to get all the pieces together, I would say, also 1:12. When that little boy was down in that hole, that’s all on the [sound] stage. That is fabricated, that’s Styrofoam, that’s paint, that’s water that’s coming in and out of a hole. That looked real, and that is Carey Meyer, our production designer. He is amazing. And he is as important to this show creatively as anyone else. And that episode was really tough to pull off, but I never once wavered in my confidence in Carey. He’s just a super talent.

AX: Which character is surprising you the most?

SANTORA: They all surprise me a little bit each week. I’d say I’m surprised at how emotional Happy can make me. When she hugged her dad, I edited that scene seventy-five times, and every time, I cried. I would say that when Paige grabbed Ralph after he almost burned up in the furnace and she yelled at him, I emailed Kat after I saw the dailies on that, and said, “I know you don’t have any kids – you sounded like a terrified mother.” That was some of her best acting of the season, that one moment. It was so real, and raw. And that surprised me. Every single actor, every single character, brings something new that makes me smile, that makes me laugh, that makes me cry each week. I love our actors – they work so hard.

AX: Any changes in the writers’ room that are significant?

SANTORA: We’ve brought in a few new writers, but they’re all relatively neophytes – well, a couple of seasons [on other shows] under their belts. Fresh blood, young blood, new blood. One of the new writers has several years’ experience of Canadian television. Their agents really pushed them, felt they were right for the job, and I read their samples, I found out who wrote the samples, because I always tear the cover page off the scripts so I don’t know who I’m reading – I don’t want anyone to say I’m just hiring my friends, or I’m hiring someone because they’re represented by a certain agency or this or that, so I read their scripts, I looked up who wrote this one, who wrote that one, and that’s who we hired, and we’re all excited to have them.

AX: Do you have any other projects going on we should know about? How are your children’s books doing?

SANTORA: I WANT AN ALIEN FOR CHRISTMAS is doing really well, and it was optioned, we’re going to try to do it as an animated film, hopefully it happens, and I am [writing] a miniseries on Charles Ponzi, the guy who created the Ponzi scam, and it’s really interesting, and getting to write something that’s based in 1920 – it’s fun. It’s a lot of research, but it’s a lot of fun. I’m writing it on spec, not getting paid to do it, hoping someone buys it. If you’re listening, History Channel [laughs].

AX: What should we know about SCORPION going forward?