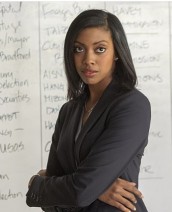 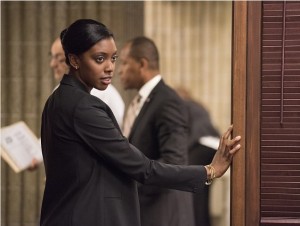 One of Rhoades’ assets is assistant U.S. attorney Kate Sacher, played by Condola Rashad. Rashad, herself a native New Yorker, played Shelby in the 2012 telefilm adaptation of STEEL MAGNOLIAS. She was also Juliet in the 2014 film of ROMEO AND JULIET, played Egyptian royal Nefertari in the 2014 telefilm HIEROGLYPH and had a recurring role on the musical drama SMASH. Rashad is also a second-generation actress; her mother is Phylicia Rashad.

AX: Did you have to do any research as far as the legal system in order to play Kate Sacher?

CONDOLA RASHAD: Yes. It’s a world that I was really not familiar with before I got this role. And so when I got it, I was excited, but I also was like, “Okay, I have some learning to do about what that is on a day to day basis.” It just so happens that my sister works for the D.A. in Atlanta. She’s really been my go-to in terms of even just the lingo, learning about what it is to work in that kind of an office, she’s kind of been my study.

AX: Is Kate in a state of constant deference to her boss, Paul Giamatti’s U.S. attorney Chuck Rhoades?

RASHAD: Chuck, Giamatti’s character, is the lead U.S. attorney, and then Connerty [played by Toby Leonard Moore] is the chief assistant. He works right under Chuck. Technically, the office is full of U.S. attorneys. I happen to be one of them, but for whatever reason, we’ll probably find out later, I’ve been taken under Toby’s character’s wing, where he’s really training me to be hands-on, so I’m in these meetings with Chuck all the time. So it’s like the pick of the assistant U.S. attorneys. When we start the show, she’s not even on the case in the beginning. When she comes to say, “By the way, I heard [some important information],” she’s not even on the case. But what she will do is, she will find information that’s needed to make herself relevant. Technically, she could have just been in the office, but whenever these two need, she goes and finds it and just finds her way to make herself relevant and to make them pay attention to her.

AX: Do you have a back story for why Kate wants to be a U.S. attorney?

RASHAD: I finished working on two films. I was working on COMPLETE UNKNOWN with [director] Joshua Marston, [costarring] Rachel Weisz and Michael Shannon, and I also was working on a Jodie Foster film, MONEY MONSTER. Which is a very interesting thing [as it also deals with Wall Street] – I played George Clooney’s quite neurotic assistant in that film. So those were the two films I worked on while we were working on the pilot.