Home » The art of more interview 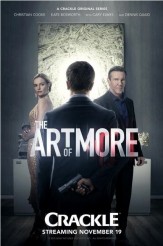 © 2016 Crackle
THE ART OF MORE
Interviews

THE ART OF MORE: Interview with Dennis Quaid

Quaid, a Texas native, is known for a prolific career, mostly in feature films that include THE RIGHT STUFF (he played real-life astronaut Gordon Cooper), ENEMY MINE, GREAT BALLS OF FIRE! (as Jerry Lee Lewis), WYATT EARP (as Doc Holliday), ANY GIVEN SUNDAY, FREQUENCY and FAR FROM HEAVEN. Quaid also appeared as President Bill Clinton in HBO’s telefilm THE SPECIAL RELATIONSHIP and starred in the CBS period crime drama series VEGAS.

AX: Does Brukner feel that there’s a metaphysical quality to art, or is he collecting purely for social advantage?

DENNIS QUAID: I think he appreciates the beauty of it, I think he’s attached to certain pieces, either sentimentally or because they mean something else to him. But I think – I don’t want to say “for the right price,” but for the right chess move, he’d be quite willing to part with it.

AX: So he sees the artwork he collects as sort of beautiful chess pieces?

QUAID: Yeah, he sees everything in life as a chess piece. He’s a player.

AX: Is Bruckner a new kind of character for you?

QUAID: Yeah, I guess he is. I’m usually in Eastern Europe up to here in mud, it’s three in the morning [laughs]. And he’s a billionaire and rough around the edges and gets whatever he wants.

AX: How is working on a ten-episode drama for an online outlet?

QUAID: I have to say, I like this experience better than I did working on [conventional] networks. There’s a lot more freedom involved. On networks, everything is happening so fast and it’s so many episodes that you’re always constantly trying to play catch-up, whereas here, we went into it with a beginning and a middle and an end to our first season. We can really develop the character, rather than just, “Let’s see how things develop as we go along.”

QUAID: Well, we have a fairly new term in the English language, which is “binge-watching,” which I really kind of discovered with BREAKING BAD, because I had never seen it and it was almost over. I watched all four seasons in two weeks with my wife, laying in bed. What could be better? [laughs] So I really loved that element. I don’t think the weekly show is going to go away. It may even make a big comeback, but I like the direction the business is going with all these different outlets and all the material that you can do now in television that could only be done in movies at one time.

This is very exciting, because the art is more controlled. This is where everything is headed. To tell you the truth, I think the networks are going to have to change. Otherwise, the only thing we’re going to have the networks for is news and sports, and the new outlets will figure out how to get a piece of that, too.

AX: The people who were at Television Critics Association press tour for Netflix were saying things along the lines of, “We’re at the happiest place on Earth, because we get practically no network notes.” Is that true of Crackle?

QUAID: Yes. Let’s just put it this way. As much as they like to say that about Netflix, they let the artists do their thing, yes, but it’s a collaborative affair, making art in the medium of television or in movies. Everybody comes together. The studios, the producers that have to do with hiring the cast, assembling all the people, and the writers and the actors. It’s a large collaboration. And so you can never have total freedom when you’re making something collaborative. But more importantly, you already have a beginning and a middle and an end to your story. You know your story going in and you know where your character is going. You don’t have to play catch-up. So a lot of what I would have as notes is already answered before I go in there, before we start shooting.

QUAID: No. Never had that here. In network television we have a lot more of it, because it’s advertiser-driven. We need to keep them happy. What you’ll have in networks, too, is writing by committee. And you’ll have a room full of writers, and you’ll have all these buildings full of producers who think that they’re writers. And when you have this committee that doesn’t really have a point of view, there’s less of a chance.

I much prefer this. There’s a lot more freedom as an artist – we all talk about control, but it’s more of a collaboration, which I’ve always enjoyed. I like working with filmmakers and writers and other actors, and we’re all in there making it together, not being preached to from on high about it. I much prefer this. It’s looser. And I think it’s what people want more.

AX: Besides starring in THE ART OF MORE, you’re also one of the executive producers. In your duties with that job, is it primarily with script, or do you ever go, “You know, I know somebody who runs this art gallery and we could shoot there …”?

QUAID: No, as far as planning locations and stuff, that was already kind of done before I was there, but I have some script approval – it’s mainly on my character – but it’s all just a title basically. It’s a title to get more money in negotiations [laughs].

AX: Does doing a season that’s only ten episodes long give you more time to actually have a life?

QUAID: Oh, yeah. It’s about the same time that it used to take to do a movie, like ten to twelve weeks, to do ten shows, so I guess it would be fourteen [weeks] and take the rest of the year off to take on other things, have a life, it’s good. And you’re still not working for a living.

AX: Does doing a series that premieres online mean you don’t have to worry about ratings?

QUAID: We all worry about ratings. We want people to watch [laughs].

This interview was conducted during Crackle.com’s portion of the Television Critics Association press tour.