Of Kings and Prophets interview 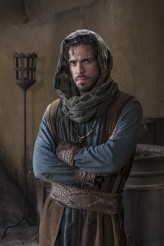 OF KINGS AND PROPHETS: exclusive interview with the producers of the ABC series 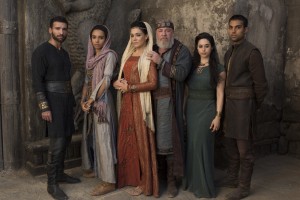 Most people, regardless of their religious backgrounds or lack thereof, have heard some version of the Biblical story of David vs. Goliath. There’s much more to it than that, however, and now executive producers Chris Brancato, Jason Reed and Reza Aslan have come together to dramatize the tale as a weekly series in ABC Network’s OF KINGS AND PROPHETS, Tuesdays at 10 PM. Olly Rix stars as David, the shepherd who wins the favor of King Saul (Ray Winstone) and eventually becomes King of the Israelites himself.

Brancato, whose writing/producing credits include THE X-FILES, FIRST WAVE, HANNIBAL and NARCOS, Biblical scholar Aslan and Reed don’t wax prophetic, but they seem royally happy to discuss their new series.

AX: Do you feel OF KINGS AND PROPHETS is very far afield, subject-wise, from HANNIBAL and NARCOS, or do you feel that there’s some kind of thematic straight line?

CHRIS BRANCATO: It’s funny, because I was on a plane to Colombia, working on NARCOS, and I had decided to do this show, because the King David story was so interesting to me, and I was reading Jonathan Kirsch’s beautiful book about David’s life. I remember thinking to myself, there are incredible parallels between these men [real-life NARCOS antagonist/narcotics trafficker Pablo Escobar and the Biblical David], one of whom obviously is a villain of epic proportions, and another of whom is a world hero, but they both came from nowhere, they were both forced to be outlaws on the run for many years, and there were these commonalities of how charisma and the kind of ruthlessness and intelligence make larger than life figures.

AX: So you see similarities between Pablo Escobar, whose product certainly caused people to have visions …

BRANCATO: Exactly right. And David, who pursued a vision. Frankly, I love writing historical dramas that are based on some sort of realistic fact. X-FILES and HANNIBAL are exceptions to that, actually, they’re entirely fictional. But what’s great about the story we’re telling here is, this is actually an embarrassment of riches. The story in Samuel:1, we’ve had to tighten it up and make nine episodes of a limited series. We could have easily done fifteen or twenty episodes with all the things that transpire.

AX: Did you have to work hard to give the women characters something to do in this, because they don’t get much to do in the historical record, beyond procreate?

BRANCATO: It was very difficult at first, because there’s so little [Biblical material on the subject].

JASON REED: One of the things I think is fascinating is that you realize very quickly as you start to unpack [the story] – when we started to break down First and Second Samuel, the efficiency of the writing, it’s so compressed, it’s so condensed, that when you start to work through the incidents, you start to realize the implication of events that happen, and you realize what certain characters, particularly the female characters, must have done. So what Chris so brilliantly did was find a way to take what must have happened in those white spaces and bring it to life and make it feel real.

BRANCATO: Not only that, we had Theresa Rebeck and a couple of other women writers on staff – Theresa created SMASH – who just were really focused on looking at these slightly-mentioned Biblical women and trying to present to the rest of the testosterone-laden males in the room what the perspective may have been. And obviously, David was quite a sexual adventurer. So we loved the idea that there are these women orbiting around David who have a great deal of power over him, just as he has a great deal of power over them.

REED: Ultimately, you realize Reza was such a great help in contextualizing what was happening historically. David went out and very strategically assembled a team of women around him, who all provided him something that he needed in order to reach his destiny. Abigail [Amy Louise Williams] provided money and political influence in the South, Anohim [Simone Kessell] consolidated his control.

REZA ASLAN: Michal [Maisie Richardson-Sellers] provided him legitimacy, a legitimate claim to the throne, and each of the wives that he brought into his circle provided something. Until he gets to Bathsheba, which is not in this season. The Bathsheba story is way down the line. What’s remarkable is that if you ask anybody on the street about David, they’ll say, “Oh, the guy who killed Goliath.”

ASLAN: Those are really pivotal moments in the David story, but they’re just the tip of the iceberg. This is a man who lived a very long, very dramatic and active life, fought many battles both internal and external, had many wives, many lovers, had many friends, many enemies, and those two, the friends and enemies tended to switch places often. So we’ve got so much story to go before we get to Bathsheba.

AX: What would you most like people to know about OF KINGS AND PROPHETS?

BRANCATO: I think it’s a show that has something for everybody. It’s got the excitement and political intrigue of watching two men compete for the throne, it’s got great women’s stories that flesh out characters who are not well-fleshed-out in the Bible, and it’s a great story. It’s one of the world’s greatest stories. And there’s so much more to David versus Goliath than most people know. And so that’s what I think the headline is – you’re going to watch a show about David beating Goliath, but there are so many more levels and layers to it.

This interview was conducted during ABC Network’s portion of the most recent Television Critics Association press tour in Pasadena, California.

Article Source: Assignment X
Article: OF KINGS AND PROPHETS: exclusive interview with the producers of the ABC series