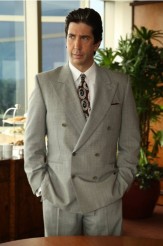 The actor talks about what the miniseries means to him personally 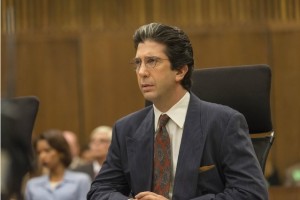 David Schwimmer may have become famous for his ten years as Ross Geller on FRIENDS, but he’s got many other credits on both sides of the camera, including drama. Schwimmer directed the excellent feature film TRUST, about the fallout from an Internet predation incident.

Now Schwimmer is playing the late Robert Kardashian in FX Network’s THE PEOPLE V. O.J. SIMPSON: AMERICAN CRIME STORY, Tuesdays at 10 PM. Long before his daughters and ex-wife became reality TV stars, Kardashian was a close friend of Simpson (played in the miniseries by Cuba Gooding, Jr.). As depicted in the miniseries, Kardashian, a lawyer, actually believed in Simpson’s innocence, unlike some other members of the defense team.

AX: What brought you to this project?

DAVID SCHWIMMER: This opportunity, and this role, and to work with this caliber of talented people, and [executive producers] Ryan [Murphy] and Nina [Jacobson] and Brad [Falchuk], and all these great actors, and what it was about, and the potential to contribute to the conversation that we’re having in this country right now. I took it without hesitation.

I thought as an actor, it’s a great challenge to play this person. I didn’t know anything about him, and I wanted to learn what motivated this man to make the choices he made. I found that really fascinating. And of course, when I read the first two scripts, it was super-clear to me that this show might be able to contribute to the conversation we’re having right now as a country, because it made me question, had things changed in the last twenty years in terms of prejudice and bias and, as we all know, the behavior of some members of the police force and their treatment of people of color? Those are all valid questions.

AX: Is there anything odd for you in playing someone whose family is so famous, and yet who most people know very little about personally?

SCHWIMMER: To be honest, that’s what kind of excited me, was the challenge of that. Because I think there will be some people who tune into this as a kind of guilty pleasure, but I believe within ten minutes of watching this show, they’ll be tuning in again for a very different reason. And the fact is that Robert Kardashian became an inadvertent celebrity. It’s not something he ever sought; he was a very modest, humble, private man. And it’s a little unseemly, actually, that because of these terrible murders and this really heartbreaking ordeal of a trial, he became an unwitting household name.

For me, when I read this, and when I read more and more scripts, it became evident that this show is as much about hubris as anything else. And Robert, interestingly enough, Robert is the one person who has nothing to gain. So I was really moved by that and that’s why I wanted to play him.

AX: As a filmmaker yourself, if you were making THE PEOPLE V. O.J. SIMPSON, would you emphasize the same things they’re emphasizing in this production?

SCHWIMMER: Oh, for sure. Absolutely. I think it touches on everything we’re obsessed with as a country. And for me, my big takeaway, from both reading all the scripts and watching my fellow cast mates perform, I think this show is as much about class as anything, because as it was then, it is today. If you are privileged in this country, you have much better access to a better outcome in a verdict. Look, if [Simpson] didn’t have [attorneys Bob] Shapiro [played by John Travolta] and [Johnnie] Cochran [played by Courtney B. Vance], do you really think that verdict would be the same? I don’t.

For me, the last two years in particular is a reckoning for this country and a confrontation about police bias and a reminder of a really brutal reminder that the black experience in America is completely different from the white experience. And this show is an opportunity to contribute to the conversation, because we see through this show that very little has actually changed in 20 years.

It’s personal for me because I live in this country and I care and I think this show is as much about class and privilege as it is about race. And the fact is, I heard some other people talking about the radio show SERIAL and about THE MAKING OF A MURDERER. The fact is, what all these shows have in common is, it’s about, if you have money in this country, the odds of getting a better verdict in the judicial system are in your favor. That’s just the way it is. Nothing has changed in twenty years – probably in a hundred years. So I don’t think the system is completely broken, but I think that we all have to be really honest with each other, that if you’re accused of any crime in this country, and you’re a person who has no means, or very little means, you’re going to have a really tough time defending yourself.