The Haunting of Alice D review 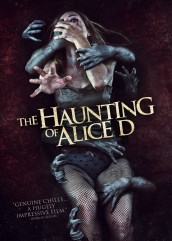 If you are expecting one of those exorcism flicks where a poor woman gets possessed by a demon and turns her head and vomits all over her loved ones and floats in the air, this ain’t it.

Instead THE HAUNTING OF ALICE D should have been called THE HAUNTING BY ALICE D, because the Alice in question terrorizes a group of friends and their hired help (read hookers) in an old mansion that used to be a brothel of some sort back in the day where women were abused as well as bought and sold on the whims of evil men.

Fast forward to modern day and the ancestor of one of these evil men is also not a very nice fellow and he now owns the building that used to be run as a gnarly brothel. After hiring some hookers to come to the joint in order to spruce up the party, they soon start to get haunted by the ghost of one of the girls that died in the place a very, very long time ago after being treated terribly by the staff.

Of course, we don’t know why Alice has taken the time to just now haunt people as the house has been around for some time and it appears as if others have lived there for quite a few decades prior to this modern haunting. But that’s not apparently, important. What’s important is that she doesn’t like anyone and regardless of sin they are going to get dispatched. Unfortunately, this sometimes happens when the door is closed … maybe not enough budget for deaths on camera.

So it’s pretty standard fare for a low budget horror flick with a lack of originality.