The actor talks about introducing Filipino mythology to the series 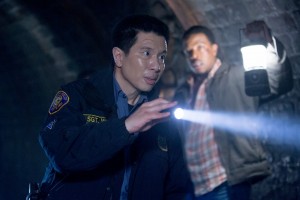 When NBC’s GRIMM, Fridays at 9 PM, recently celebrated its hundredth episode, the cast celebrated in a number of ways, including by speaking to a group of fellow actors at SAG headquarters. Among the panelists is Reggie Lee, who plays Portland, Oregon police Sergeant Wu.

Over five seasons of GRIMM, poor Wu was out of the loop for longer than anyone. When he encountered an Aswang – a horrifying Wesen referred to in real-life Filipino mythology – detectives Nick (David Giuntoli), the Grimm of the title, and Hank (Russell Hornsby) let Wu think he was crazy rather than telling him monsters were real. By now, though, Wu is not only in on the big secret, but he’s recently become a werewolf (were-Wu), albeit the helpful kind. Good thing for Nick and Hank that Wu’s the forgiving type.

We caught up with Lee on the red carpet before the SAG event (and before Wu got hairy) to talk about his GRIMM adventures, which look likely to continue now that the show has been picked up for a sixth season.

AX: How is it making it to the hundredth episode?

AX: Was the Aswang episode an idea that you gave to the producers, or how did that come about?

LEE: I’m going to happily say, “Yes,” because they said, “Are there any Filipino folk tales?” And I said, “Are you kidding me? They all believe in sci-fi, period. They all believe in that kind of stuff.” So those I gave them three [suggestions], and they chose what they first called “the a**-wang,” so I corrected them and said, “It’s not ‘a**-wang,’ it’s [correct pronunciation] ‘oz-wong.’” I liked their pronunciation initially. But yeah. It was a joy to have something that was always told to me as a child, and you believe, come to fruition. And for you to see the actual creature was kind of freaky.

AX: And did you feel a sense of joy that you provided this very pivotal aspect of Wu’s storyline?

LEE: Yeah, in more ways than one. The first is, I was so appreciative of the collaborative effort of the producers to even go there, and say, “Let’s explore that, and let’s link it to his development, let’s link it to that.” And they used my real culture, because I’m Filipino/Chinese, and I’m more Filipino than Chinese, and they gave me a family [in the show], and so it was really nice to have that evolving thing with something that I had grown up with for so long. And kudos to them.

AX: Did you have to lobby to get Wu to know the big secret about Wesen and Grimms, or did the producers tell you, “It’s coming, it’s coming …”?

LEE: I will say that part of their story writing is so organic that when I saw those books [about Wesen in Nick’s home], when I investigated that murder at Nick’s house, they took it from there. They said, “Well, he has to investigate, so he’s going to find the books.” Because they weren’t really expecting me to find out until later on, like a few seasons later. The fans have been a big part of it. They were like, “You better let him know, because he’s been through too much agony.” So they’ve been great and instrumental in that.

AX: And do you play Wu’s sarcasm any differently now that he knows?

LEE: [laughs] He’s a little more comfortable with it now. He can throw them out now, those one-liners. I love it.

LEE: [laughs] Oh, boy. I keep in touch with her. She’s on CRAZY EX-GIRLFRIEND now. But I would love to have her back, and she’d love to be back. We’re always pining for a Wu-mance. Let’s hope it happens.

AX: And what would you most like people to know about GRIMM right now?

LEE: That we’re a family behind the scenes as well as on the scene. And I think it shows, hopefully that shows. We love each other to death. It’s more than just a TV show, it’s become our source of happiness.