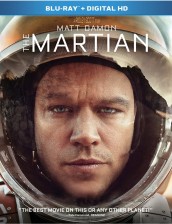 Reviewed this week: THE MARTIAN, CONTRACTED: PHASE 2, PAINKILLERS and more

The early weeks of the New Year aren’t that exciting normally so what we get on video isn’t normally that exciting either. However, there are still some stuff that are worthwhile checking out. 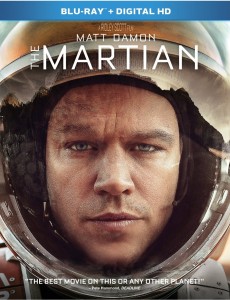 THE MARTIAN – The hilarious comedy THE MARTIAN that just won for best Comedy/Musical movie at the Golden Globes makes it way to video this week. Wait, OK, let’s just be honest. There’s no way this is considered a comedy other than to get the award in the category. Are there funny moments? Definitely. Is it a comedy? Not a chance. Matt Damon stars as an astronaut that is left for dead (because they really thought he was dead) on Mars and must use his brains and a whole lot of left over space salvage to survive long enough for the band of astronauts that left him to come pick him up. Unfortunately, this is a very long time and he must figure out a way to grow food on the planet as well as not die from the environment. Ridley Scott directed the film so it has a lot of hard science in it which may not appeal to everyone (math nerds unite) but it isn’t enough to distract from the overall story which is about survival. There is enough here as well that it does not become tedious or boring as many of the things he must go through are exciting and interesting. Also since Damon is on camera pretty much the entire film, if you don’t like looking at his face this isn’t one for you, but if you enjoy a good science fiction flick, you will get a kick out of this amazing comedy or musical … maybe they just cut all the songs? 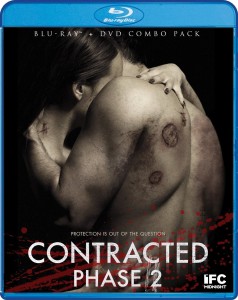 CONTRACTED: PHASE 2 – If you missed the first film CONTRACTED it deal with a young woman that had a one-night stand with some random dude but instead of just getting pregnant or contracting your every-day STD, she gets some strain of a zombie virus. Slowly the rest of the film has her transforming from this highly attractive woman into a gnarly flesh eater. CONTRACTED: PHASE 2 picks up right after the events of the first movie and things are moving very quickly with more people becoming zombies via sex (and presumably other means). The storyline involves a friend of the woman in the first movie that also had sex with her and once again he is slowly devolving. But all around him others are experiencing similar issues. But there is also another guy that is connected to the deaths of women that have zombified and may be the original “carrier” of the virus. Along the way we get some really nasty moments such as horrible puss-filled legions, nose bleed from hell, hair pulled out in extreme fashion, bloody itching, Latter-day Saints evisceration, bathroom maggot removal, removing contacts one eye at a time and bloody party dip. Needless to say, it ups the gore considerably and is a pretty damn enjoyable flick with a nasty take on the zombie genre. 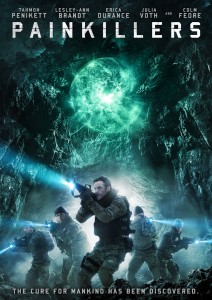 PAINKILLERS – Your typical straight-to-video fare about a group of army soldiers that go into Afghanistan in search of some strange power. Of course, they first must fight through some Taliban attack and soon are returned to base without any knowledge of what they were doing or why they were there. They continue to be fed pills (the Painkillers in the title) that mask the truth about their mission but slowly begin to piece it back together through a series of flashbacks. Honestly, the whole thing doesn’t really add up in the long run and it has something to do with a huge corporation sending a number of army corps into the wasteland to recover this power source. It never works out and people just continually end up dying or never returning. So when this group returns it is something special, however, as they came back without the power source, the corporation is trying to figure out what happened and why their memories got wiped clean. Again, typical B action movie with more talking than action but then gives up a few gun fights here and there to throw us a bone. 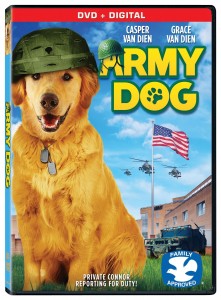 ARMY DOG – A decent, low budget family film that is a bit of a knockoff of MAX that came out last year about a mentally-damaged military dog that lost its master in the war. Here, the master is alive and the Army dog in question doesn’t have any mental issues but there is tension between the military father and the teenage daughter that feels as if he has missed the chance to be a good dad. So when the pair along with the pooch go on a camping journey and they are attacked by a dangerous wolf roaming the lands, they must come together and learn to love each other again. Luckily, the dog also helps and is the center around this re-building of the relationship. Casper Van Dien (of STARSHIP TROOPER fame) is the lead and does a serviceable job as does his real-life daughter Grace Van Dien in the role has his teenage daughter. But this is a low budget family flick that is harmless in many ways but more about father-daughter bonding. There are also no controversial subjects here regarding religion or anything else so that works well for pretty much anyone. 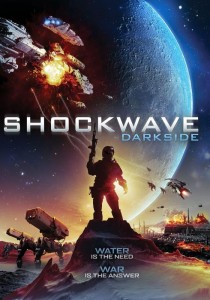 SHOCKWAVE DARKSIDE – There are a lot of interesting ideas in SHOCKWAVE DARKSIDE, an ultra-low-budget science fiction flick, mostly about the creation of the universe, the numerous difference in religion and an epic war between non-believers of religion and those that believe in at the very least something. But while the ideas are interesting, the presentation leaves a lot to be desired. First off, the special effects here are worse than animated feature film quality and it really detracts from anything interesting going on. Which is to say there isn’t a lot of interesting things going on because most of the film involves a bunch of soldiers standing around talking about philosophies and politics while being hunted occasionally by robotic machines sent by one of the other side of the war. Interestingly enough it has Sonequa Martin-Green (who plays Sasha from THE WALKING DEAD) in maybe a role she did prior to landing the cherry gig on AMC. She isn’t bad, but the acting from everyone else is borderline high school level. So as much as the interesting ideas are there, they are sunk by bad acting, even worse special effects and a movie where literally nothing really happens.