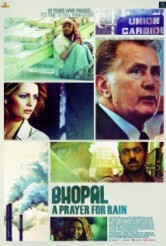 An immersive, multi-level look at a historic disaster

In 1984, a disaster at the American-owned Union Carbide chemical plant in Bhopal, India, killed ten thousand people. A number of documentaries have been made about the incident, but now director Ravi Kumar, who co-wrote the film with David Brooks, has made the scripted drama BHOPAL: A PRAYER FOR RAIN. The movie, inspired in part by journalist Sanjoy Hazarika’s book BHOPAL – LESSONS OF A GAS TRAGEDY, depicts not only the catastrophe itself, but a number of elements that led up to it. With public awareness in America of people having to make stark choices between economic and physical survival, the film seems timely thirty years after its main events.

We see what is happening at the Bhopal plant largely through the eyes of three very different men. Dilip (Raajpal Yadav) is a worker at the Union Carbide plant, with a good heart and a reluctance to question anything about the job that provides his paycheck. Motwani (Kal Penn) is a local journalist who up until now is mainly known for printing invented stories, but who finds himself motivated to try to expose the truth before it’s too late. Warren Anderson (Martin Sheen) is the Union Carbide CEO who honestly sees himself as someone trying to provide villagers out of their ingrained poverty.

Motwani suspects that the situation at the plant is dangerous, but he can’t get Dilip to provide useful information. Dilip puts up with long hours, verbal abuse and what he suspects are lies in order to provide for his family. The plant can’t make needed repairs because they would require parts of the structure to be shut down for a time.

In the midst of this is Union Carbide’s CEO Anderson, who is great at glad-handing, but somewhat less adept at coming up with real solutions.

Kumar et al give us a sense of the bustling life of Bhopal, as well as the consistent pursuit of dollars over health and why so many people in the situation felt that they had no choice but to comply with employer demands. The filmmakers create a sense of interconnectedness

Filmed on location in Hyderabad and Bhopal, as well as Mumbai and Los Angeles, BHOPAL has a sense of authenticity, even when the dialogue (in subtitled Hindi/Urdu and in English) winds up being a bit pat. Yadav is a sympathetic Everyman, Penn is solid and knows how to modulate humor and seriousness and Sheen is great at both the folksy and dismissive sides of his character.

BHOPAL: A PRAYER FOR RAIN works as a history lesson and a drama, but it also is good at something that eludes many other films of this type – it shows how everything comes together to create preventable horror.