The actress also talks her ONCE UPON A TIME role 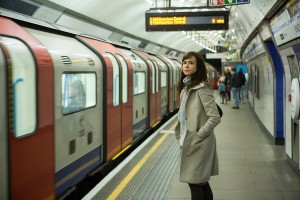 In Starz’s new eight-part miniseries THE MISSING, premiering this weekend on the network and already available on Starz on Demand, we toggle back and forth between 2006 and the present. In 2006, Frances O’Connor’s Emily and James Nesbitt’s Tony are happily married, living in London and visiting France with their young son Oliver (Oliver Hunt). During one instant, Tony turns to look at a football game – and Oliver vanishes. Eight years later, Emily and Tony remain devastated. Emily has tried to move on with a new marriage. Tony remains actively obsessed with finding Oliver – and then turns up an actual clue as to what may have happened.

O’Connor, originally from Oxfordshire in England, has just spent two years as Rose Selfridge on the BBC/PBS drama MR. SELFRIDGE; she’s also currently playing Belle’s mother on ONCE UPON A TIME. Her feature credits include Steven Spielberg’s A.I.: ARTIFICIAL INTELLIGENCE and TIMELINE. She sits down in a room at the Beverly Hills Four Seasons to talk about playing Emily, who effectively exists in two timelines.

ASSIGNMENT X: Why did you decide to become involved with THE MISSING?

FRANCES O’CONNOR: I just thought the scripts were so solid and the story was so evocative. And also the subject matter I really connected to emotionally. And I love the character.

AX: Some actors who are also parents have hesitations about doing kidnap dramas, because the subject matter is so upsetting …

O’CONNOR: Yeah. I think it was one of these things that, when I read the scripts, I really wanted to be a part of it, because I just thought it was such great storytelling. I think I underestimated the effect that playing it would have on me. It was pretty tough. But I think because the scripts were so good, you did feel supported in it. And Thomas [Shankland], the director, was very supportive during the process, on some of the tough shooting days. And then also just having Jimmy Nesbitt, who played my husband, just having him on set, too – we both were going through it [laughs], so we looked to each other if we felt like it was too much on any given day.

AX: How long were you shooting?

O’CONNOR: We started in February, I think, and we shot until end of June. We had a two-week hiatus in between the two time periods. 2014 we shot first, we had ten days off, and then we shot 2006.

AX: Is it tough to sustain that level of emotional devastation for that long a shoot?

O’CONNOR: Yeah, it really is. You have to find methods of getting out of it for a bit and then getting back into it.

O’CONNOR: I find when I get home, sometimes I’m still in it, and I’ll always find I’m having a shower or I’m going for a walk to get rid of it. Because I think acting’s a really physical act – it’s to do with the brain, and a lot of those scenes took a while to get rid of. And being in a series of that length, it took the summer to let it all go.

O’CONNOR: Yeah. I think it really helped that they separated it as a time thing. I made a choice in the physicality of 2006 that she’s a lot freer. She never wore heels, her feet were always on the ground and she was much more reactive. And then in 2014, her hair is obviously very different. Little choices like that really help, I think. Emily in 2014 is much more guarded, she’s much more contained. It’s really fun playing such difference in a character.

AX: Do you also have to find different ways of playing opposite James Nesbitt and Jason Flemyng, who plays Mark, Emily’s 2014 husband?

O’CONNOR: Yeah. It did feel when I was playing them like two very different relationships. Jimmy’s energy [as] Tony, because he’s an obsessive kind of character, to be around that maelstrom and energy is kind of overwhelming sometimes for Emily. Whereas I think she’s so loved and supported by Mark.

AX: Was it the same director for the entire project?

O’CONNOR: Yeah, Tom Shankland did all the eight episodes, and he’s one of the best directors I’ve worked with. And it was a big job for him, to carry all eight stories. You could ask him any question, and he would say, “Yes, because in Episode Blah-de-Blah, this happens.” Stuff like that, he was just so on top of it, and it really helped in terms of keeping the characters on track and stories on track, and there were some days where you would just get confused and he would always have the answers.

O’CONNOR: Well, we shot some stuff in Paris, but most of it was shot in Belgium, because it’s so similar to France and it’s so expensive to shoot in France, and there are tax breaks in Belgium, so we shot in Belgium. But it’s a predominantly French-speaking country. We shot some of the British parts in Belgium and we shot some of it in England. I think the way Belgian crews approach things is probably a little bit more relaxed than the way British crews work, so that was [something] to get used to, but they’re such nice people. It was great.

AX: Is THE MISSING based on a book, or is this an original script?

O’CONNOR: It’s two brothers, Jack and Harry Williams. It’s just an original idea. One of them had a terrible experience in France on this childhood holiday in France. They got stuck in some little town, and it stayed in his head, and then I’m not sure why it became an abduction story.

AX: Did you read the whole thing at once when you first got the project?

O’CONNOR: About a week before – I had a lot of the episodes leading up to the rehearsal. We had about a week’s rehearsal – I mainly sat down with Jimmy for that week – but the week before I had all eight episodes. I didn’t really want to start rehearsing [without reading them]. Which is great as an actor, to have the whole story and the whole arc of your character before you even start shooting. Usually it’s like four or five episodes, but working on the last episode, I felt really lucky.

AX: As a reader/viewer, were you surprised by the outcome?

O’CONNOR: Yes, I was. They wouldn’t release the last episode until a week before we started rehearsing, “I really need to find out what happens and I have no idea.” And when I read that last episode, it really was a surprise. That’s exciting. I mean, for me, I couldn’t wait to pick up the next episode, and when I started reading it, I stayed up quite late just reading the next episode and the next episode. I was like, “I hope it’s not me” before I finished reading it, because you really felt like, apart from Tony and Tcheky [Karyo, who plays a French police detective], everyone else is totally up for it in terms of whether it could be them or not, or involved on some level. And that’s what makes it really great storytelling.

AX: Granted, what’s at stake for the different characters is very different, but in some ways, both Emily and Rose Selfridge are both women going to their husbands, “Stop being so obsessive!”

O’CONNOR: Yeah, that’s true. I really felt like they were totally different characters. Emily in 2006 is quite a gentle person, and she feels things very deeply. In some ways, Mrs. Selfridge does, too, but I think MR. SELFRIDGE is about somebody who is kind of a pre-emancipated woman trying to come to grips with this modern world and she kind of evolves through that, whereas I think Emily’s story is something very different. I think the joy of it for me is that it was so different in some ways. Both series were great to be in for different reasons.

AX: Because there’s a giant time leap in the story, there are some things that we learn that happen to Emily, but were there things that you filled in for yourself, where you said, “Well, I know she’s like this about this in 2014, so I’m deciding this happened during this period, even though the script doesn’t discuss it”?

O’CONNOR: I think the great thing about this was that the script does discuss it. You just don’t see it yet. Every kind of behavior that you see from Emily, if you can’t quite figure it out, is explained during it. I mean, we definitely sat around and discussed character and what had happened in what way and what my life was like with Tony and what my life was like with Mark, that kind of thing, but it really is explained why she is the way she is.

AX: Does she no longer believe in God, or is she simply angry at God?

O’CONNOR: I think she’s so dark in that moment, I think things happen where, it never happens that she just goes back to God or anything, but I think she starts to understand what’s happened in her life more. Sut I think in that moment, she’s very black and she’s very dark and I think she genuinely believes, “God doesn’t care, God makes bad things happen if He exists, and I don’t believe in God because …” Well, maybe underneath she still does. She doesn’t dare to hope. I think she feels like she’s spent so much time hoping that if she actually does connect to that feeling, that it will be too much for her and she will lose herself. And I understand that, the pain that a parent can go through losing a child. Some of the latter scenes in 2006 I loved playing, they were so creative and you’ll probably see why when you watch them, but I thought how that expresses itself is so great to play as an actor, but kind of horrific to play [laughs] for the character.

AX: Are you having a good time?

O’CONNOR: Yes. They’re lovely, lovely people to work with. I’m really enjoying it. And you get to wear great costumes [laughs] and it’s not too taxing. And it’s fun – we do a whole bunch of green screen.

AX: Is there anything else you’d like to say about THE MISSING right now?

O’CONNOR: I feel very proud of the work that we did in it and I hope people love it as much as we do.