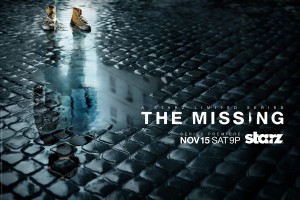 THE MISSING concludes its eight-episode first season on Starz, Saturday Jan. 10 at 9 PM. Originally conceived as a limited series, THE MISSING has been so successful with terrific ratings and Golden Globe nominations for both miniseries/telefilm and dramatic actress (Frances O’Connor) that a second season has been commissioned by the BBC and Starz, albeit the storyline won’t be connected to the first season.

The first season of THE MISSING, written by brothers Harry Williams and Jack Williams, is set in two time periods. In 2006, British married couple Tony (James Nesbitt) and Emily (Frances O’Connor) are distraught when their eight-year-old son Oliver (Oliver Hunt) disappears while the family is on vacation in France. In 2014, the obsessed Tony finally uncovers a clue that may lead to Oliver.

Tcheky Karyo [pronounced “T-checky Carry-oh”] plays French police detective Julien Baptiste, who tries to help Tony in 2006 and comes out of retirement in 2014 to resume his investigation.

Karyo, born in Turkey, is a famed stage and film actor in France. He is fluent in Spanish, Italian, English, French, and, he adds, “A bit of Turkish. I’ve played also in German and I like Arabic, so there are a lot of languages I can act in.” International audiences will know Karyo from any number of films, including THE RETURN OF MARTIN GUERRE, the original LA FEMME NIKITA, 1492: CONQUEST OF PARADISE, NOSTRADAMUS, GOLDENEYE and TAKING LIVES, to name but a few credits.

Karyo makes himself available to discuss THE MISSING, first in the garden of the West Hollywood Four Seasons Hotel and later at a party thrown by Starz for the Television Critics Association.

ASSIGNMENT X: You’ve played a number of police officials and detectives before. What’s special about Julien for you?

TCHEKY KARYO: This is a series. This is the first time I [have done] such a good and big series, and it’s very human. It’s a thriller, and the character has a lot of qualities that we have time to develop – his patience, his curiosity, he has a lot of wisdom.

AX: In about half of the story, he’s retired. Do you have to get yourself into a mindset of somebody who would quit a job that was that important to him?

KARYO: It’s so well-written. The two brothers [who wrote THE MISSING], they gave us such a good job, such a good story, that he retires, but he keeps being occupied by being a beekeeper, and I always felt that was a great metaphor to explain Julien’s character. He’s a cop with a lot of humanity. He doesn’t look at people – “This one is good, this one is bad.” He takes time to try to understand people, and he gives a chance to them. So a lot of humanity is shown. And he can’t stand to be retired. I can relate to that. I did a long road already. When I turn my head, I see a lot of life behind me. How much is left, I don’t know, but my energy is like a young guy of thirty years old, I would say. So it’s not easy to imagine myself as a retired man. I do music on the side, I do a lot of things on the side of being an actor.” 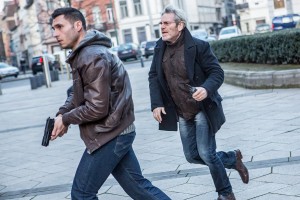 AX: What do you play?

KARYO: I play guitar. I did this album, CREDO. It came out in December [2013]. And this is a nice video we did with it, you can find it on YouTube. So I’m occupied. And I’d say Julien would never give up.

AX: Did you have to learn how to do anything for the role, like how to be a beekeeper?

KARYO: [laughs] Exactly. But we don’t see much of that. But what I learned, actually, what I didn’t know is, bees are so important for us. If they do not pollinate, we all die. So I thought, it’s very constructive to take care of this.

AX: You speak quite a few languages. Is there anything in the way you learn a language that is applicable to the process of developing a character you’re going to play?

KARYO: Well, when you learn a language, you learn a bit about the culture and the people who speak this language, I would say. For instance, the Turkish people, they have a certain way to speak the language. There is a music, something that brings you to a certain attitude, something noble I feel, the dignity and the strength. Spanish is very alive, something very familiar for me, when I speak with the Spanish people. In Italy – a lot of humor with the Italians. They always have a laugh about something and can make fun of themselves. With different characters, you learn through the language.

AX: Do you see a different between French thrillers and English thrillers in their approach to storytelling?

KARYO: No. It’s just the talent of people doing things. It’s like, if the French people ask me what is the difference with the way you shoot in America and in France, the only difference is the way people engage themselves. If there is a difference, the amount of money that is invested, then sometimes you have a studio and it’s so professional that it becomes a military way of doing things, but at the end of the day, you are with creative people, no matter where you are, in a studio or independent or in France or somewhere else. It’s the creativity. And in the case of THE MISSING, there is the BBC, there are the two brothers, who are really talented, there is Starz, that gives it the chance to be seen [in the U.S. and other parts of the world]. It’s like a big boat with very talented people. So I don’t see any difference. It’s just a matter of the quality and the creativity of the people, wherever they come from.

AX: THE MISSING is broken into 2006 and 2014. It’s been stated they shot all the 2014 sequences, then took a little break and then did 2006. Was one of those periods, easier, more difficult, more interesting for you to play than the other?

KARYO: I enjoyed both of them. I loved to do 2014, go through the sick body, got older, be back to something more alive. I really enjoyed both of them. I enjoyed also the journey I go through with Tony. We do most of the thing together. I really enjoyed going through this journey and the change when we go to 2006. It’s very interesting, very compelling.

AX: When you first read the script for THE MISSING, were you surprised by what happened, or did you start putting the pieces together before you got to the end?

KARYO: I was surprised. It’s very well done. You can have insights, but that’s why we are very strict on not giving away anything.

AX: It was also a very long shoot for a single storyline. It was eight hours, but it was almost like a film schedule. How did you pace yourself? Did you like working that way, or did you wish the shoot had been longer or shorter?

KARYO: No. I came quite late on board, because I was afraid to start that, I have to say. But then I was thinking constantly to [MISSING director] Tom Shankland, who I felt when I met him the first time, that he was such a good man and had such a strong belief and conviction in what he’s going to do with it, and that it will be a character-driven story and that it will be a thriller, we would have freedom as actors and space, that humor would be there. We go through a comedy, a tragedy – life is a tragicomedy, so we can laugh or have humor at the worst things sometimes, which is surprising and puts you in a position to think. So really, he gave me the strength to go for it. So really, I jumped quite late, and the challenge was to have somebody who puts on the gloves with me as a sparring partner to prepare my character, and act in English, which is a great opportunity for me.

AX: You said you were afraid to do THE MISSINGt at first. What were you afraid of? Were you just thinking, “Oh, my God, this is going to be depressing for five months”? Was the story scary to you, as a parent, if you are a parent?

KARYO: Yes. That’s why I took time to make a real decision. And then I realized, it would never be depressing, it would be really rich, fulfilling. It was a mixture of confused feelings, but when I made up my mind and decided, “I’m going to go for it,” I was really happy. And today, I’m proud of it and I can be here and talk about it without any doubt.

AX: How is James Nesbitt as a scene partner?

KARYO: It was great with James. Because we didn’t know each other, we had a few discussions when we met the first time, and then we started shooting, and we’d never really rehearsed together or prepared together or talked. We sort of met while we were shooting, between “Action” and “Cut.” Which was great, because we were in the moment. It was like jamming, like two good musicians, they come with the instruments and it works. The two brothers were great. We could really play rhythm and also take some time and have some freedom together with Tom Shankland, who was a guide for us, great director, who shot all the scripts. We really had pleasure.

AX: You did some American projects awhile back, but you mostly do European work now. Did you just decide you wanted to work closer to home, or why did you stop doing work in America?

KARYO: It’s because when I turned fifty, I thought, “I feel like a young boy, but there is some life – what is left? What am I going to do more than what I did here?” With all those movies, I was happy, it was great, but I wanted to do music, so I came back to France, started to play my guitar, put a band together and did a first album. The second album [CREDO] just came out.

AX: What style of music is it?

AX: Is it available for purchase in the U.S.?

KARYO: iTunes, yes, and maybe Amazon. Maybe they have some.

KARYO: Yes, in France. When I go back to France, I tour France with my band.

AX: Do the acting and the music inform each other in any way?

AX: Do you have any other projects we should know about, besides the album?

KARYO: Well, there are some French movies I did that will be released in France. I continue my concerts. I have projects in theatre with musicians. It will be a show with poetry, I’m going to say with musicians, in co-production with the Brighton Festival in England. I also have a personal project on Jimi Hendrix, working with a poet who wrote a great long poem on Jimi and working with a director I really like, who knows a lot about music. We are putting that together.

AX: Is this for stage?

KARYO: For stage in France, yeah.

AX: When it was announced that there would be a second seas on of THE MISSING, it was suggested that perhaps some characters from Season 1 might possibly show up in Season 2. Might your Julien be one of them?

AX: Are you happy with the way THE MISSING has been received in the U.S.?

KARYO: Fantastic. It’s like winning a good number [in the lottery]. We’re lucky. We worked hard, we gave a lot of our imagination and the feedback is fantastic.