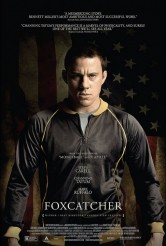 FOXCATCHER is a disturbing film, and not only because of the true-life events it depicts, though those are certainly unnerving and dismaying. Director Bennett Miller, working from a screenplay by E. Max Frye and Dan Futterman, creates an atmosphere of unhappiness and shame that works as an emotional fog. However, through all the sweat, tears and finally blood that appears here, we feel as though we’re watching at a remove, an objective audience to a highly subjective set of situations.

Then Mark receives a phone call from John du Pont (Steve Carell), one of the wealthiest men in the world. John persuades Mark to meet him at the du Pont estate, Foxcatcher Farm, in Virginia. Here John tells Mark that he’s an American hero. John wants Mark to be a champion again and is willing to build a huge gym and bring in a whole team of aspiring wrestlers, as well as providing Mark with a salary and lodgings. Mark is unsurprisingly delighted by this, though Dave is wary.

For Mark, this is a way to establish himself as a success outside of Dave’s shadow – until John insists on bringing Dave to Foxcatcher. Dave’s suspicions are allayed by an enormous salary and what seems to be the prospect of watching over his brother.

We can see and logically deduce what motivates each of the Schultz brothers. John is more opaque – even his friends (he had some in real life, though the film makes him look extremely isolated) say they don’t understand what happened. FOXCATCHER the film shows us what he does, but never weighs in on his precise motivations. John definitely longs for respect from other, more physically powerful men and tries to buy this. It’s unclear to us (and perhaps to John as well) whether there’s also a component of sexual desire. He also wants respect from his mother Jean (Vanessa Redgrave), though this seems a less attainable goal.

Carell has transformed himself to play John du Pont, moving in a way that makes it look as though his arms are too long for his body and there’s something wrong with his face. He burns with controlled intensity, and we see him try to tamp down shame and confusion then rise up in self-righteous wrath. However, the filmmakers don’t try to guess what triggers the man, so he is as unpredictable to us as he is to those around him. Carell creates an individual who is pitiable and also very scary as he gazes forward with a bland expression.

Tatum and Ruffalo are both physically convincing, at least to a non-athlete, as wrestlers, gripping and grappling with assurance and determination. Tatum gives Mark a naïveté that is easily wounded, while Ruffalo has a warmth and magnetism that makes us readily comprehend why others view Dave as a natural leader.

FOXCATCHER is suspenseful, though not in the manner of a normal thriller; although it is based in fact and in human behavior, in some ways, it’s more reminiscent of something like JAWS. We’re not so much watching a series of escalating events racing toward a conclusion as we are treading water in the open ocean, aware that something we can’t see could prove lethal at any moment. There’s plenty of tension, but not as much visibility as we’d like in a character study that culminates in tragedy.