Home » Deliver Us From Evil Review 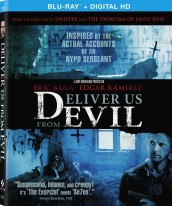 DELIVER US FROM EVIL Highlights this week in Blu-ray, DVD and VOD Releases 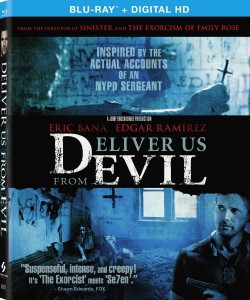 DELIVER US FROM EVIL – Apparently, this supernatural horror film is based on events that actually happened to a New York police officer during his time with the force. Eric Bana stars as the said officer and gets wrapped up in a supernatural case where a group of former soldiers after returning from their tour of duty overseas come back and start having visions of some cryptic writing and begin carving the writing on walls and killing unlucky folks who happen to get in the way. The stakes get even crazier when a priest gets dragged into the case and explains that something involving demons and possession is happening rather than just a bunch of soldiers suffering from post-traumatic stress disorder. It culminates in the officer’s own family being dragged into the fray and an in-jail exorcism having to be performed in order to find out the truth of what’s happening and to save the officer’s family. DELIVER US FROM EVIL is pretty good. It gets under your skin and has some brutal moments where these weird soldier guys are doing serious cruel stuff to individuals who are innocent bystanders in the mess. If you are into supernatural horror flicks this is one to check out and enjoy. 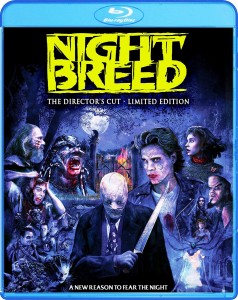 NIGHTBREED: THE DIRECTOR’S CUT – This is something that has been due for a long time. NIGHTBREED was a film that was highly anticipated before it was released. An original horror flick filled with crazy monsters and from the mind of one of the best horror minds in the world, Clive Barker. However, when the studio decided that the version Barker presented wasn’t what they wanted, they cut the sh** out of it and made it something completely different than the vision Barker had. But years and years after the film debuted, Barker along with help from others have pieced back together 40 minutes of missing footage and removed 20 minutes of footage from the original cut to form this new Director’s Cut. And it is really a different movie altogether. Instead of focusing on a serial killer and how monsters could never be actual good guys, we get the opposite with the monsters as the focus and how they are victims here. It really is an interesting turn of events given how much is changed here. For fans of the movie, this is something they have been clamoring for since the release of the original cut. For Barker, as he says in the introduction, it is a sense of closure for the director/writer as NIGHTBREED is one of those babies he has always wanted to see the light of day as he wanted. Highly recommended. 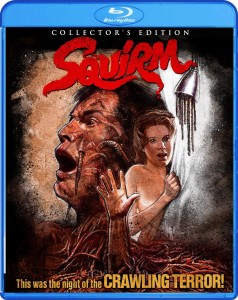 SQURIM – This is an odd duck of a horror flick with the main antagonist being a deadly swarm of earthworms that get pissed off when they get hit with electricity and go on a hunt for human blood. What’s weird is that earthworms aren’t really the fastest creatures in the world and you’d think they could just run in an opposite direction and be safe. Run… hell, they could just walk because their f***ing worms. Instead, after a bunch of dudes get eaten by the worms, people just go about their business and don’t mind that the water doesn’t work in the bath or that the power is off or that crazy sound of a bunch of worms slowly … slowly … crawling toward them. Maybe look up at the shower and figure out there is no water because f***ing worms are in there. I’m not saying SQURIM is a bad movie, if anything it is unintentionally hilarious because of the actions people take, or don’t take. Overall, it is a funny 70s horror flick that looks really good in the Blu-ray transfer from Scream Factory and is worth watching when you have some free time to kill. 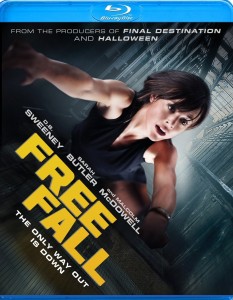 FREE FALL – The title of this movie is a bit of a misnomer because there isn’t much of a free fall going on except with the original premise, which is that of an executive for a financial corporation that commits suicide at the company’s headquarters. When Jane Porter (Sarah Butler, last seen in the I SPIT ON MY GRAVE remake) finds out foul play may have been involved she tells one of the bosses. That guy calls in a crisis manager that is anything but friendly and aims to be the kibosh on Porter telling on the company. When Porter gets stuck in an elevator it turns into a deadly game of cat and mouse. Butler is crazy hot and seeing her in the film doesn’t change it but even after I SPIT ON YOUR GRAVE she still doesn’t appear to be a feisty individual able to fight off a would-be attacker. There isn’t much suspense here but the thriller is alright just from a cat and mouse perspective and might be worth watching on Netflix once it arrives. 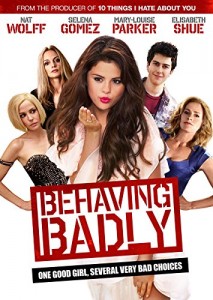 BEHAVING BADLY – The teen comedy has been done so many times over the decades that there isn’t a lot of originality left in the genre. Good thing that BEHAVING BADLY doesn’t try to reinvent the wheel here but focus on what would make for a good film with a slew of big name guest stars, a good deal of nudity, some crazy situations and a decent core storyline about teen love and the chase of a hot woman. While the main characters, outside of Selena Gomez, are relatively newcomers to Hollywood, the guest stars are certainly not. Elizabeth Shue is damn hilarious as the horny mother of the main character’s best friend and Mary Louise Parker is dead-on as boozing, drugging mother that actually does a good job of keeping the reign on her kids. Other guest stars include Heather Graham, Dylan McDermott (who does a hilarious job as a sleezy, drug laden strip club owner), Jason lee, Gary Busey and more. Overall, not a bad little teen comedy here with lots of naked chicks, some funny characters and a storyline that is pretty much what you’d expect from something like this with bad decisions coupled with more bad decisions.