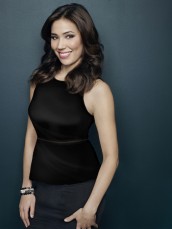 The actress also talks about her upcoming movie 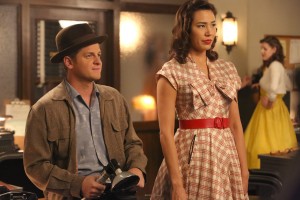 Fox’s BONES is now in its tenth season, currently airing Thursdays at 9 PM. Michaela Conlin, who has played artist/computer whiz Angela Montenegro for all two hundred BONES episodes (and counting) makes herself available for a brief chat about her favorite moments from last season and what else she’s been doing.

ASSIGNMENT X: You probably can’t talk much about Season 10 yet, but do you have a favorite episode or a favorite scene from Season 9?

MICHAELA CONLIN: I really loved the wedding [of Emily Deschanel’s Brennan and David Boreanaz’s Booth]. Definitely, the wedding was a highlight, as was the bachelorette party. That was really fun.

AX: What about the episode where Angela and her husband Jack Hodgins [TJ Thyne] find out that Jack has a brother he never knew about who is somewhat unbalanced?

CONLIN: Yeah, that was a big one. That was a good one. I’m still going to say the wedding and the bachelorette party were my favorites.

AX: Do you have any other projects going on that I should know about?

CONLIN: Yes. I just did a film over the hiatus called BABY, BABY, BABY. It was directed by Brian Klugman, who plays Oliver Wells in [BONES], so that was wonderful. It’s a relationship movie set in Los Angeles in the present day.

CONLIN: Yeah, there are a lot of good L.A. locations. Adrienna Palicki is in it, from FRIDAY NIGHT LIGHTS (and AGENTS OF SHIELD) and Brian and I. It was fun.

AX: And did you hear that Fox chairman Peter Rice said that if all the contracts can be worked out, he’s open to BONES coming back for another season?

This interview was conducted at Fox’s party for the Television Critics Association at SoHo House in West Hollywood, California.