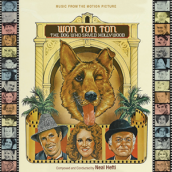 Neal Hefti was one of the swinging-est composers of the Mad Men era, a musician who put a happy-go-lucky bachelor pad groove into the wet bar of such comedies as SEX AND THE SINGLE GIRL, HOW TO MURDER YOUR WIFE and BAREFOOT IN THE PARK. However, it’s his cool, superhero scoring via Vegas for TV’s BATMAN that remains Hefti’s best-known work among a criminally under-represented discography. Thankfully, Kritzerland comes to the rescue with this two-fer of great scores for box office bombs (whose chances certainly weren’t helped by their way-too long titles). While I can’t attest if 1976s WON TON TON THE DOG WHO SAVED HOLLYWOOD was a mutt as a movie, Hefti’s music is a charmer as it gives a composer who most often played a 60s shagadelic beat the chance to jump into the music of Hollywood’s roaring 20s for his final score. Starting with a rousing rendition of the Paramount fanfare, Hefti unleashes his Won Ton theme with a Dixieland orchestra, then chases it about with the madcap stylings of a Keystone Cops comedy, the over-emphatic emotion of a tear-jerking Mary Pickford drama and cliffhanging thrills that could easily accompany Lillian Gish in ice flow distress. Not only does Hefti delightfully catch every nuance of a classic silent movie score, but he furthers the satire by transposing its theatrics onto the off-the-lot travails of Madeline Kahn’s wannabe actress who ends up being one lucky pooch owner. WON TON TON constantly surprises, whether it’s going for rapturous Egyptian music worthy of The Sheik, a Scott Joplin swing or out-of-tune playing that sounds like a pit band going to pieces.

That’s certainly not the problem of the Jonathan Winter’s mummified husband, whom Rosiland Russell drags around in a suitcase for 1967’s OH DAD, POOR DAD, MAMMA’S HUNG YOU IN IN THE CLOSET AND I’M FEELIN’ SO SAD, a notorious adaptation of Arthur Kopit’s way-better regarded stage play. But as a score, it’s pure Hefti wackadoo gold, as the corpse’s vacation to the islands makes for kitsch fun. Another catchy Hefti theme is particularly off the wall when played with a Calypso grooves for fender guitar and kettle drum, with another brassily percussive theme that you half expect to break into the refrains of a certain caped crusader’s name. A wittily funereal mood is given by an angelic chorus, gently picked harps and a diabolical organ. OH DAD get across the swinging-est corpse ever, with an especially hilarious wah-wah title song that captures the bright energy that embodied Neal Hefti’s jazzy brilliance for an album that will equally delight Rin Tin Tin and Don Draper.

Click on the link to Purchase WON TON TON soundtrack